Tales from the Brain: "Ghost Stories" less than the sum of its parts but a tricky twist makes it all worthwhile 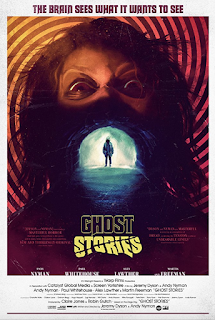 Ostensibly, British import “Ghost Stories” is packaged as a horror anthology from across the pond, but it might stand as the first one that actually relies on the connective tissue more than the three segments within. Adapting their own 2010 West End stage play to the screen, writer-directors Jeremy Dyston & Andy Nyman skillfully construct a triptych of horror tales based on three individual paranormal accounts that have more in common with each other than the film’s protagonist and the viewer initially expect. “Ghost Stories” can be a spookily good time with goosebumpy frights, but it also wants to be about something even more macabre and existentially affecting than bumps in the night. In pulling the rug out in the final stretch, it mostly succeeds.

“Psychic Cheats” TV host and professional skeptic Professor Phillip Goodman (Andy Nyman) devotes his life to debunking the paranormal, taking down fraudulent psychics. When he is contacted by his hero, the long-disappeared Charles Cameron (Leonard Byrne), and finds him terminally ill and living in a trailer, Goodman goes on to investigate three of Cameron’s unsolvable cases by meeting with people who each share their unexplainable encounters. Case 1: Tony Matthews (Paul Whitehouse) was working his last shift as a night watchman at an asylum for female patients when he witnessed the spirit of a little girl in a yellow dress. Case 2: High-strung teen Simon Rifkind (Alex Lawther) is paranoid and full of tics after one night when driving in the dark along a woodsy road, only to hit something. Case 3: Rich, pompous suit Mike Priddle (Martin Freeman) waited at home as his wife had just given birth to their child and experienced a poltergeist in the nursery of his mansion. How these three cases relate to each other will hit closer to home than Goodman could ever predict.

Unfolding as flashbacks, the three horror-tinged anecdotes have their moments, although each of them feel frustratingly unfinished, cutting short as they seem to just be getting started. Rather, the wraparound framework with Professor Goodman is actually what matters here and how his actions in his past have gotten him to where he is now. There is a tricky plot twist in the last twenty minutes that changes everything, and as Goodman learns, nothing is what it appears. Once the film gets there, it reinvents itself and rips apart our expectations in devilish, surprising, and imaginatively surreal ways. Less than the sum of its parts, “Ghost Stories” has enough spine-tingling parts (particularly that second case) to recommend, and in a cheeky final touch, the filmmakers delightfully end their film with Bobby Pickett’s “Monster Mash” over the credits.