The Beastess Within: Bel Powley compels but “Wildling” loses its way 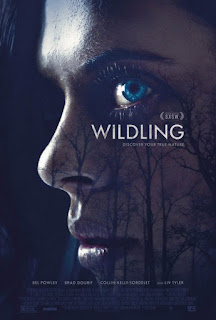 “Wildling,” the feature debut from director Fritz Böhm (who wrote the script with Florian Eder), begins well as a dark fairy tale and a hairy coming-of-age metaphor for a young woman’s transformative sexual awakening. Many other films in the realm of horror have covered this territory before, most recently 2017’s bold “Raw,” and while Böhm finds atmosphere in some of the visuals and sets up some interesting ideas to give his first film its own distinguished voice, “Wildling” gradually loses interest in its provocative subtext and seems to go on autopilot. “Ginger Snaps,” this is decidedly not.

Living in a cell is all introverted teenager Anna (Bel Powley) has ever known. According to Daddy (Brad Dourif), she has had to stay inside since she is one of the last children being sought out by the “wildling,” a toothy monster. In reality, the man has arrested her maturity, giving her daily injections and building a fantasy mythology for her to protect her from herself. When her father figure attempts to take his own life and go to “The Better Place” (Heaven, to you), the gunshot is heard. Anna is brought to a hospital, and when Sheriff Ellen Cooper (Liv Tyler) gathers that the young woman is new to the outside world, she takes it upon herself to foster Anna, until a permanent home turns up. Experiencing the real world (and the taste of a juicy hamburger) for the first time, the strange Anna tries to lead a normal life with the help of Ellen and her teenage brother Ray (Collin Kelly-Sordelet), until changes in her body take over.

There is an enticing, visually evocative fairy-tale sensibility throughout “Wildling,” particularly in the opening sections where young Anna (played by both Arlo Mertz and Aviva Winick) is in bed with her father spinning his yarn about the nasty “wildling” outside. The film still remains compelling and affecting as Bel Powley (coming off her breakout role in 2015’s “The Diary of a Teenage Girl”) navigates a different kind of path toward womanhood; if anything, Powley is the reason the film works for as long as it does, her round, soulful blue eyes giving her an ethereal softness to the otherwise feral Anna. Brad Dourif is also genuinely unsettling with that recognizable “Chucky” voice in his scenes as Daddy, and Liv Tyler lends a much-needed source of humanity as Ellen, a woman who uses her skills of protecting people for a living to care for Anna and offer her a maternal figure that she never had.

The payoff of “Wildling” becomes less about Anna discovering who or what she is and more about a standard, visually muddy, darkly lit showdown in the woods and caves. There is also the use of The Wolf Man (James Le Gros), a country bumpkin living off the land in the woods and wearing wolf skins, which could have added an interesting element but only functions as a deux ex machina when he’s finally needed. When the film doubles back by resurrecting a thought-dead character and then goes nowhere special or otherwise surprising, it is safe to say that it has lost its way. It’s well-made for the most part, and Bel Powley gives it her all, but “Wildling” falls short of its greater potential of exploring female sexuality through the guise of a monster origin story.