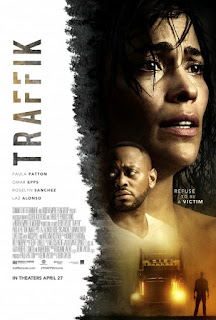 Thrillers exploiting serious subject matter for cheap thrills and entertainment value isn’t anything new to filmmaking, but with “Traffik” (not based on the 1989 British miniseries that inspired Steven Soderbergh’s 2000 film), the seams show. It wants to gratuitously put attractive star Paula Patton in skimpy bathing suits, but it also wants to be “inspired by true events,” addressing that sex trafficking is still, in fact, prevalent and then concluding with statistics. This isn’t to say that writer-director Deon Taylor (2016’s “Meet the Blacks”) doesn’t hold attention with certain thriller tropes, but how he tries shining a light on sex trafficking doesn’t seem so much unflinching as it does disingenuous and hypocritical. “Traffik” isn’t particularly eye-opening, either.

Brea (Paula Patton) is a Sacramento Post journalist with integrity, but when a fellow reporter scoops her story on government corruption, she is let go by her editor (William Fichtner). Later that night on her birthday, mechanic boyfriend John (Omar Epps) plans to take Brea on a romantic getaway in a plush glass house in the mountains, owned by the company of John’s sport-agent friend Darren (Laz Alonso). Brea knows that John wants to propose, but first he surprises her with a muscle car he built back up for her. Before the couple reaches their getaway home, they stop at a gas station, where Brea encounters a strung-out, victimized woman (Dawn Olivieri) in the restroom. Brea has the feeling this woman is asking for help but stays out of it, and on their way out of the gas station, she and John evade a troupe of leering, menacing bikers. Once Brea and John begin their weekend with a little canoodling in the pool, Darren and long-suffering wife Malia (Roselyn Sanchez) show up unannounced. A ringing phone interrupts them, but it seems to be coming from a satellite phone that the woman at the gas station put in Brea’s purse. Things go from bad to worse when Brea unlocks the passcode on the phone, making a shocking discovery with incriminating evidence of women being sold, and the owner of the phone shows up to reclaim it.

A grimy, nasty, exploitative B-movie uncomfortably blended with loftier aspirations, “Traffik” wants to have it both ways, simultaneously hoping to thrill and pretending to have something more socially woke on its mind, but does neither very convincingly. First things first, director Deon Taylor does effectively set up a tense situation, even if the first 30 minutes is a long setup—the lengthy romantic montages between Brea and John in an infinity pool look like soft-core Cinemax leftovers—until it gets there. Being shot by cinematographer Dante Spinotti, the film does look a lot better than it has any right to be, and there is a decent cat-and-mouse game in the woods, followed by Brea hiding out in a car that inevitably won’t start. As a VOD-level thriller, it’s still pretty standard stuff that even the least trained moviegoers will be paces ahead of the characters.

Paula Patton is able to make the proceedings more watchable than not as the tenacious Brea, and it’s appreciative that when her and John’s lives are on the line, she doesn’t just stand back and cower. Everyone else is just cannon fodder for the one-dimensional traffickers, including Laz Alonso, who’s so obnoxious as Brea and John’s alpha, coke-snorting friend Darren that one actively roots for his demise. Usually associated with comedies, Missi Pyle also turns up in a key role as the local sheriff. In an early scene when Brea’s boss calls her article a puff piece masquerading as a hard-hitting exposé, it might as well be a meta commentary of the film itself. It didn’t even have to be thematically deep or important, but “Traffik” didn’t have to come off so self-righteous, either.