Why'd It Have to Be Clowns?: Art the Clown is the stuff of nightmares in endlessly tense "Terrifier" 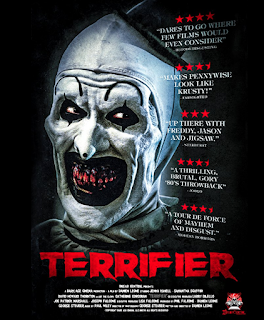 “Terrifier” sets pretty high expectations for itself with that moniker, but without trying to do more than terrify a niche audience, writer-director Damien Leone succeeds in delivering a low-budget slasher shocker. Leone’s effective, not-so-secret weapon is David Howard Thornton behind that clown-make-up, turning Art the Clown into a freaky and unnerving horror-movie icon in the making, from his creepy physical jesting to his bloodied, shit-eating grin. Art first appeared (though played by a different actor) in the filmmaker’s cleverly spun 2013 horror anthology “All Hallows Eve,” as well as Leone's 2011 short film titled "Terrifier," but Thornton’s unforgettable turn as this human psychopath is the entire show here. Pennywise, who?

After an opening sequence with one of Art’s facially scarred survivors (Monica Brown), the plot is pure formula, but it works in terms of tight pacing and structure. As their Halloween night on the town comes to an end, Tara (Jenna Kanell) and outspoken friend Dawn (Catherine Corcoran) decide to sober up with some pizza before driving home. Sitting in a booth, they encounter Art (David Howard Thornton), who gives Tara the creeps but gives Dawn an opportunity for Instagram photos. On their way back to Dawn’s car, the tire has been punctured, so Tara calls her sister, Victoria (Samantha Scaffidi), who’s busy studying for an exam but agrees to pick them up. Waiting for their ride, Tara decides she has to use the restroom and gets a maintenance man to let her into a building. Unbeknownst to Tara, Dawn and Victoria, what Art has planned for them is no laughing matter.

Taut, nightmarishly unsafe, mercilessly brutal, and at times pretty stylish for a grindhouse throwback, “Terrifier” quickly grows into an endlessly tense experience for the viewer. The characters may not do everything right, like hiding behind cars and inside closets, but their decisions make for hairy situations that one can’t get enough of, as well as one of the most gruesome demises involving a saw seen in a long time. While it decidedly won't help coulrophobics conquer their fear, “Terrifier” will surely satiate the bloodlust of fans who don’t mind some gore with their thrills.