Halloweentown: "Goosebumps 2" more of the same but does the trick 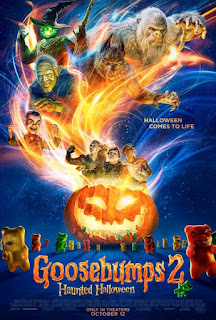 A kid-targeted meta riff on author R.L. Stine’s 400-million-selling series of books, 2015’s “Goosebumps” was a pleasant surprise—a fun adventure that found the spooky and whimsical essence of the books and a wee bit of edge with the presence of killer lawn gnomes. Jack Black brought a wacky lightness to the role of R.L. Stine, but it was the charm and surprising emotional weight of the younger characters that made it a worthwhile alternative to the really scary stuff. Getting one into the Halloween spirit is the sequel, “Goosebumps 2: Haunted Halloween,” arriving with a different creative team and a different cast entirely (and Black showing up just in the nick of time in what could be considered more of an extended cameo than an active participant in the story proper). Still none too concerned with generating actual goosebumps, the film admirably tries to be a little creepier than its predecessor, and while it has maybe half the heart, “Goosebumps 2: Haunted Halloween” is still an undemanding, briskly paced diversion.

In the New York town of Wardenclyffe, single mom Kathy Quinn (Wendi McLendon-Covey) asks her Columbia University-bound daughter, Sarah (Madison Iseman), who’s suffering from a case of writer’s block for her college essay, to babysit middle-school aged brother Sonny (Jeremy Ray Taylor) and his best friend Sam (Caleel Harris). When Sam ropes Sonny into starting a junk-removal business for no cash, they end up finding treasure in a boarded-house that happens to be R.L. Stine’s former abode. A trunk in a hidden door behind the fireplace holds a locked manuscript  of R.L. Stine’s first story, “Haunted Halloween,” and a ventriloquist's dummy Slappy (now voiced by Mick Wingert), who's reanimated as soon as one of them reads an incantation. Once the two friends realize the sentient doll can not only walk, talk, and teleport but also prank their bully and finish their algebra homework, Slappy has a sinister endgame that involves making his own "family" and bringing a menagerie of every Halloween decoration in Wardenclyffe to life with the help of the town’s Tesla Tower. It is up to Sarah, Sonny, and Sam to stop him.

With all the makings of an annual spooktacular, featuring everything Halloween coming to life, “Goosebumps 2: Haunted Halloween” almost gets there. It isn’t without appeal and imaginative touches, but even with a hurried pace that doesn’t wear out its welcome, the monster mayhem and antics aren’t all that memorable. A headless horseman, a trio of witches with glowing green orbs for faces, fire-breathing and seed-shooting jack-o’-lanterns, and an arachnid the size of a house made of balloons make appearances, but a bit with a candy bowl of maniacal gummy bears that grow to life-size is the only true highlight. Slappy, who was the ringleader of the monsters in the first “Goosebumps,” plays a pivotal role here again in the hell-raising shenanigans, and his nightmarish menace is surprisingly closer than comfort to Chucky, like injuring someone on a ladder and turning another into a ventriloquist's dummy. Director Ari Sandel (2015’s “The DUFF”) and screenwriter Rob Lieber (2018’s “Peter Rabbit”) don’t quite replicate the same amount of charm as the first film and dial up the comedic elements too much for there to be much tension. What they come up with to unleash every monster into the real world again is a less interesting variation on the events of the first “Goosebumps” with a rather easy wrap-up.

Director Ari Sandel does get the festive atmosphere of Halloween right and makes sure to include a sneaky visual reference to “Halloween III: Season of the Witch,” with the trio dressing up as a green witch, a pumpkin and a skeleton, and the clever iconography of Pennywise's red balloon floating above a sewer grate that R.L. Stine admits to thinking up first. Madison Iseman (2017’s “Jumanji: Welcome to the Jungle”), Jeremy Ray Taylor (2017’s “It”), and Caleel Harris (Hulu’s “Castle Rock”) are all engaging and create a likable chemistry with each other, but it’s perpetual scene-stealer Wendi McLendon-Covey (TV’s “The Goldbergs”) who wrings the most chuckles out of her role as Sarah and Sonny’s single working mom Kathy. Ken Jeong (2018's "Crazy Rich Asians") is also amusing as the Quinns’ enthusiastic neighbor Mr. Chu, an avid "Goosebumps" fan who lives to make the most elaborate lawn decorations for every holiday. Jack Black’s R.L. Stine might be relegated to the film’s second half, as if he walked on set after finishing “The House With a Clock in Its Walls,” but it’s nice to see a film that has its young protagonists saving the day. Since audiences have been spoiled with so many superior family-friendly horror-adventure tales in recent years, “Goosebumps 2: Haunted Halloween” is of a slighter stature, but it is still more treat than trick, working as frightfully palatable slumber-party fare after the kids come home from trick-or-treating.