The Killer Next Door: "Knuckleball" a lean, mean cat-and-mouse thriller 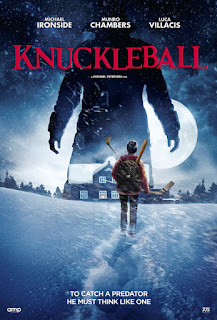 2017’s blackly comic Christmastime horror film “Better Watch Out” may have beat it to the punch, but “Knuckleball” is a snow-bound Canadian thriller that will also draw comparisons to “Home Alone,” if that family comedy’s hijinks were stained with blood, of course. Director Michael Peterson, who wrote the script with Kevin Cockle, economically sets the stage before letting its young Kevin McCallister surrogate defend himself from his attacker. Spare and unadorned, “Knuckleball” is an admirably stripped-down thriller that escalates with a sense of portent and overturns expectations by not exactly going where one predicts.

When his parents, Mary (Kathleen Munroe) and Paul (Chenier Hundal), have to attend a cousin’s funeral, video game-obsessed 12-year-old boy Henry (Luca Villacis) gets dropped off to stay with his codgy grandfather Jacob (Michael Ironside) in his Canadian countryside farmhouse. Mary is estranged with her father, and being back home instantly brings back bad memories of finding her mother hanging herself in the barn. After his parents leave, Henry is put right to work, fetching wood and shoveling manure, and then introduced to Dixon (Munro Chambers), a twentysomething who lives alone in a house on the other side of the woods and sometimes helps Jacob around the farm. The next morning, Henry goes to wake up his grandfather, but Jacob is stone-cold dead. He tries calling his parents, and once leaving a voicemail, his phone dies and he forgot to pack a charger. Running to get help from Dixon, Henry is quick to discover that something is quite off about his grandfather’s helper.

Though the gruff Michael Ironside would seem to be the resident baddie here, he’s isn’t on screen long enough, and yet his presence literally and figuratively lingers over the proceedings. The baton gets passed to Munroe Chambers (2015’s “Turbo Kid”), who is suitably skeezy and menacing as witless predator Dixon, but “Knuckleball” rests on the slight shoulders of Luca Villacis (TV’s “Channel Zero”) as Henry. When the pre-teen is first introduced, he could have come across as a brat, constantly lost in his video games, but Villacis’ Henry is easy to root for, playing him as a credibly smart and resourceful boy, who has boobytrap-setting know-how and also happens to be a good shot when it comes to throwing baseballs. When the film gets going, it doesn’t let up or lose its focus on the thrilling, small-scale cat-and-mouse game between Henry and Dixon. As if writer-director Michael Peterson and co-writer Kevin Cockle were afraid of painting themselves into a corner, the film does attempt to dig a little deeper than it should by needlessly throwing one final curveball involving skeletons in the family’s closet that poke too many questions to satisfy. Until then, “Knuckleball” is lean and mean.