Not My Son: "Hole in the Ground" a well-acted, beautifully moody build-up with a letdown of a payoff 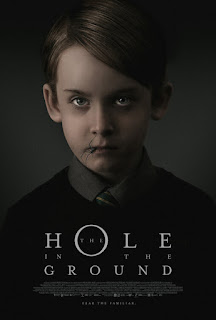 Director Lee Cronin’s feature debut “The Hole in the Ground,” a character-driven, Ireland-made horror piece he co-wrote with Stephen Shields, almost comes close to being on the level of previous bold horror-centric acquisitions from indie film distributor A24. While it feels cut from a more conventional cloth than other thematically similar films, particularly Leigh Janiak’s “Honeymoon” and even a little of Jennifer Kent’s “The Babadook," it still wisely trusts in the emotional underpinning of a mother-son story that taps into the unnerving notion of a parent not always feeling like they recognize their child. “The Hole in the Ground” may not break much new ground, but it does kindle some eerie imagery and assured performances from its two actors.

Ready for a fresh start away from her abusive husband, young mother Sarah O’Neill (Seána Kerslake) makes the move with son Chris (James Quinn Markey) to a rural fixer-upper near a small Irish village. Her biggest concern is Chris adjusting to his new school and making friends. Soon after an encounter with a catatonic neighbor woman, Noreen Brady (Kati Outinen), standing in the middle of the road, Chris runs off into the woods, where Sarah finds a gigantic sinkhole. She finds her son and gets him back home safe and sound, but thereafter, something doesn’t seem quite right about Chris. When Sarah and Chris come across Noreen again, this time in front of their house, the old woman tells Sarah, “It’s not your boy,” and bashes her head into Chris’ passenger window. Chalking the incident up to Noreen’s mental illness, Sarah confides in Noreen’s husband, Des (James Cosmo), who lost his son, and sure enough, Chris’ new behavior—he is no longer petrified of spiders and he pours parmesan cheese on his spaghetti, even though he used to hate it—proves Sarah’s suspicions to be correct that the boy who answers to “Chris” is an imposter.

From the start, there is a sinister level of portent in the beautifully shot early frames of “The Hole in the Ground.” Chris’ reflection is distorted in a funhouse mirror (the first of a recurring motif) at a seemingly abandoned carnival with his mother, and then Stephen McKeon’s dread-inducing score kicks in before a topsy-turvy overhead shot of Sarah’s car traveling down a forest road to assure audiences this won’t be a sweet bedtime story. The film isn’t coy about its genre leanings, but there is a restraint and a measured pacing to how Lee Cronin lets his minimalist chiller unfold without any cheap scare tactics. It is strange that Sarah never seems to report the dangerous sinkhole or mention it to anyone, but at 90 minutes, the film is otherwise tightly constructed and looks and sounds terrific.

Seána Kerslake is compelling as loving mother Sarah, who’s medicated and dips into a state of paranoia that the viewer isn’t sure what she’s seeing can be trusted. Newcomer James Quinn Markey solidly sells the personality of the real Chris, a normal child who likes playing a goofy-face game on the count of three with his mother but struggles making friends in a new school, and then capably turns on the creepy aloofness of a changeling. Even if the climax is a bit anticlimactic compared to the atmospheric build-up, “The Hole in the Ground” remains attentive to its characters and achieves a mood that is creepy, unsettling, if not exactly frightening, and finally open to ambiguity. It’s effective enough that one is excited to see what nightmarish scenario Lee Cronin cooks up next.