All Work and No Family: Taylor Schilling is on fire in hilariously mean but affectionately sweet "Family" 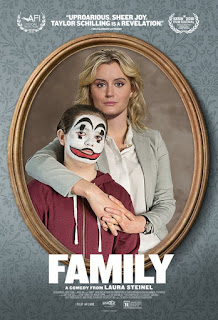 “Family” would seem more clichéd than it really is, given its instantly recognizable premise about a self-absorbed workaholic turning over a new leaf after being forced to care for a child, but it’s all in the execution of the writing and the performances. This being her feature debut, writer-director Laura Steinel strikes the right tone, never coming off self-consciously outrageous or emotionally manipulative. It shouldn’t come as a surprise that Taylor Schilling is an underestimated comic dynamo here after scoring reactionary laughs in 2015 parents-gone-wild indie “The Overnight,” and this film gives her a lead role that should hopefully steer her toward more comedic parts. Realizing that a character can be mean and misanthropic without having contempt for them and the audience, “Family” is often hilariously acerbic but also quite sweet and meaning it.

A senior-level VP at a hedge fund in New Jersey, Kate Stone (Taylor Schilling) has exhaustedly put her career before everything else, including her family. She’s socially tone-deaf and not emotionally demonstrative, and everyone at work avoids her. When her brother Joe (Eric Edelstein) calls her over, he needs a favor: watch her 11-year-old niece, Maddie (Bryn Vale), while he and wife Cheryl (Allison Tolman) move his dying mother-in-law out of her house and into hospice. Kate very reluctantly agrees, even if her stay gets pushed to a week. When Kate more or less meets her niece for the first time to pick her up from ballet practice, she realizes Maddie is a special kid. Maddie resists gender norms: she likes karate, running around in a cape, and playing with homemade swords out of sticks. She also becomes fascinated with becoming a Juggalo after meeting fellow snack-lover in Dennis (Fabrizio Zacharee Guido), who prefers to be called “Baby Joker,” at the Kwik Mart gas station. Though Kate is a much looser parental figure (read: neglectful) by letting Maddie have chicken parmesan at a pizzeria every night, encouraging her niece to fight back at school, and dropping her off at the wrong school, she begins to learn that her and Maddie have more in common than she thought.

Beginning at the end with a face-painted Kate running through crowds at an Insane Clown Posse festival called The Gathering of the Juggalos and then circling back a week earlier, “Family” brings a fresh perspective to this type of formula. For one, Laura Steinfel is affectionate rather than condescending or mocking toward these gung-ho, face-painted Juggalos, and for two, the Juggalo angle ends up being a more meaningful metaphor for Kate and Maddie both being misfits in their own lives. Proving herself to be an unassuming performer with deadpan comic timing, Taylor Schilling (2019’s “The Prodigy”) is on fire as Kate, playing into her most abrasive qualities without any apologies. As Kate explains to Maddie, “I’m usually in this place where I hate myself, but I still think I’m better than anyone else.” That sounds like she would be a cruel monster, but Kate’s casual cruelty is more of a defense mechanism. She’s just socially awkward, saying exactly what she’s thinking even if she’d be better off keeping it to herself, and has never made an effort to know any of her co-workers or family members. Fortunately, Kate feels like a character who has a life before and after the film, living beyond the story in the script, and Schilling capably finds warmth and sympathetic layers in a character who has created her own alienation.

Relative newcomer Bryn Vale is an authentic, disarming natural as Maddie, a young girl who might not fit in with the kids at school but pursues her passions and lets her freak flag fly. Vale’s scenes with Schilling are obviously the highlight, but the supporting cast is equally fun to watch and never cornered into one-note roles, including the recently ubiquitous Brian Tyree Henry (2018’s “If Beale Street Could Talk”) as karate instructor Sensei Pete; the dependable Kate McKinnon as next-door neighbor Jill, a perky, rule-enforcing stay-at-home mom; Jessie Ennis (2018’s “Life of the Party”) as new financial analyst Erin; Matt Walsh as colleague Dan; and the delightful Allison Tolman as Kate’s sister-in-law Cheryl, who only agrees to have Kate watch Maddie because she’s their last resort.

For a comedy that manages to make one care about its caustic protagonist, “Family” might take a structurally familiar path to get there but never strains for redemption when a natural progression will do. By the end, Kate does come around but does not entirely change her personality or salty opinions; she just has to try a little harder to be nice and not totally scrap basic human decency, and maybe that side of her has just been lying dormant for a while. Laura Steinel gets convincing chemistry out of her actors and knows how to pay off a running gag (like an office coffee maker slowly running its course throughout the film), and she is clearly influenced by Wes Anderson in some of her rapid pans and zooms that punch up the humor. As generic as the title might be—it’s better than “Bad Aunt”—“Family” is quite apropos in how Kate and Maddie are both outsiders who deep down want to belong and connect, whether or not they can do that within their biological families.