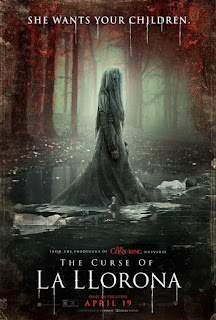 Latin American legend has it that a woman, in a fit of jealous rage after being jilted by her husband, drowned her two children in the river and then took her own life. The spirit of La Llorona, also known as The Weeping Woman, still lives on, searching for her children and preying on the lives of mortal children who hear her crying. Based on the haunting folktale that has cautioned children to behave, “The Curse of La Llorona” could have been something special, but instead it's hamstrung by screechy jump-scare theatrics and too many "don't do that!" character choices. Loosely fitting into Warner Bros. Pictures and New Line Cinema’s once-promising “The Conjuring Universe,” the film ends up being closer in quality to “The Nun” than “The Conjuring,” and that’s hardly a boastful place to be. When debuting director Michael Chaves has the viewer in his hand through some of the individual moments and plays with expectations, his effective direction is almost enough to overcome the frustrations of the screenplay that’s not nearly as ambitious as its concept. Alas, “The Curse of La Llorona” still falls short of reaching its potential and feels too familiar to hold our attention hostage.

In 1973, Los Angeles, widowed mother and Child Protective Services social worker Anna Tate-Garcia (Linda Cardellini) has had to lighten her case load at work to take care of her own two children, Chris (Roman Christou) and Samantha (Jaynee-Lynne Kinchen), since the death of her police officer husband. When a case comes in regarding mother Patricia Alvarez (Patricia Velasquez), Anna makes a welfare check on Patricia’s sons, who have been absent in school, only to discover that Tomas (Aiden Lewandowski) and Carlos (Oliver Alexander) have been locked in a closet. Patricia is taken away and yet blames Anna for freeing them. Not long after Anna gets Tomas and Carlos to safety, the two boys are drowned in a reservoir. As a mother herself, Anna will have to do all her can to protect her children from the wrath of the legendary specter La Llorona (Marisol Ramirez), who plans to harm them as she did her own 300 years ago.

As “The Curse of La Llorona” begins with a chilling prologue set in 1673, Mexico to introduce the legend, it seems to be on its way to become a macabre fairy tale of sorts in the classic vein. Aesthetically, the film applies the house style of its James Wan-produced franchise with a fluidly kinetic tracking shot that follows Samantha in from the outside and quickly introduces the geography of the Tate-Garcia house, cued up to Curtis Mayfield’s 1972 track “Super Fly.” Once Anna puts it together that La Llorona poses a threat and is not just an old folktale, the film deflates fast into a scare-to-minute ratio of startling noise-makers and overexposure of its titular child-drowning boogeywoman. When she isn’t eerily weeping off-camera, La Llorona herself is merely another demonic face in a white dress waiting to pop out and shriek. The screenplay by Mikki Daughtry & Tobias Iaconis (2019’s “Five Feet Apart”) flirts with the idea of child abuse, but doesn't go far enough with it, like a CPS co-worker sent to question Anna’s own children who have matching burns on their forearms and suspecting foul play. The bigger weakness is that the film goes too far in the other direction of the “Mom, there’s a monster under my bed”-type narrative, where the parents naturally never believe their children. Here, when the children have separate encounters with La Llorona and are marked with a burn, Chris and Samantha respond differently by keeping what they've experienced to themselves, and Anna follows suit when La Llorona gets to her as well.

Linda Cardellini solidly makes the most of the harried Anna, most likely finding more emotional depth than what was found on the written page, and it’s just a pleasure to see the actress leading a studio film. Roman Christou and Jaynee-Lynne Kinchen, as children Chris and Samantha, are convincing enough when they’re being terrified, but they aren’t given much else to do besides be potential victims. One is willing to go along with a couple of the characters' early lapses in judgment before they know their lives are truly at stake, but by the time members of the Tate-Garcia family start making face-palming, hardly sensible decisions after seeing La Llorona (Samantha is the most egregious offender when it comes to foolishly retrieving her precious doll out of her safety zone), it becomes clear that their actions putting them in harm's way are just script contrivances. Raymond Cruz at least injects a dose of humor and smarts without even cracking a smile as Rafael Olvera, an experienced former-priest-turned-curandero who agrees to help the Tate-Garcia family with his mystical methods.

Already selected to helm 2020’s “The Conjuring 3,” director Michael Chaves does give one faith in what he will bring to his next project. Because of how Chaves stages certain set-pieces with conceptually nightmarish inspiration without always resorting to desperate jump scares, it isn’t a total loss. There’s a mischievously harrowing sequence where Chris attempts to keep himself and his sister safe in their mother’s car at night; a nifty now-you-see-her, now-you-don't trick involving an umbrella; and a bath time sequence with a creepy setup where La Llorona’s corpsy hands end up on Samantha’s soapy head. The rest of the scares are admittedly predictable that one has enough time to plug their ears, waiting for the loud musical stinger or open-mouthed screaming of La Llorona. Also, connections to this being a cog in the “The Conjuring Universe”—Father Perez (Tony Amendola) recalls helping a couple with a certain demonic doll—are tenuous at best. On occasion, “The Curse of La Llorona” entertains as a fun communal experience, but it so often likes its jolts loud and repetitive, as if even the tiniest bit of subtlety and more creeping dread wouldn’t garner enough of a reaction from the audience. It’s a real bummer when the big-screen treatment of a mythical figure from another culture can't unnerve or send anyone running out the theater screaming.