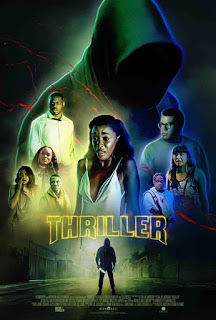 There haven’t been many slasher films with an entire cast comprised with people of color that it’s a shame the South Central-set “Thriller” is just not a very good one. Uninspired and amateurish, director Dallas Jackson’s feature debut denies fans of the slasher sub-genre any kind of pleasurable thrill when there’s so little style or finesse to raise one’s pulse. The plot itself might as well be an update of 1980’s “Prom Night” (even if there was already a loose remake of that Jamie Lee Curtis-starring slasher), beginning with a childhood prank gone wrong and then just replacing the killing spree at prom with a homecoming dance. It also doesn’t help when the majority of the teenage characters being paid for their bullying sins are such twits, not likable enough to be worth our sympathies but almost making one root for the killer.

In South Central, Los Angeles, a group of thirteen-year-old friends prank the put-upon, stuttering Chauncey Page by baiting him into an abandoned house and giving him a scare. After Chauncey reacts and pushes a girl to her death, the other kids vow to say that it was all Chauncey’s fault, sending him away to juvenile detention. Four years later, with the circle of friends in their senior year at Compton High School, the hooded, sneering Chauncey (Jason Woods) returns and the news of his presence shakes up everyone, particularly guilt-ridden good girl Lisa Walker (Jessica Allain), who was the one forced to lure Chauncey to the house. Rounding out her complicit friends are Lisa’s football star boyfriend Ty (Mitchell Edwards); his jealous ex-girlfriend Gina (Paige Hurd); squabbling Latino couple Tiffany (Chelsea Rendon) and Eddie (Michael Ocampo); aspiring DJ Derrick (Luke Tennie); rap artist-chasing sexpot Kim (Pepi Sonuga); gangster Andre (Tequan Richmond); and Ronny (Maestro Harrell), who throws a house party. So, of course, Chauncey’s homecoming falls on the same weekend as the high school’s homecoming, and the rotten kids start getting taken out.

Co-written by director Dallas Jackson and Ken Rance, “Thriller” gets so bogged down in its surplus of characters and their uninvolving mini-dramas that it sometimes forgets to be a horror film. There’s even one cheap, go-nowhere red herring involving the dead girl’s sister Kim, who speaks in her sister’s voice in the mirror and might have a personality disorder. With thirty minutes left, the film actually gets to the stalking and slashing, but even that leaves one wanting; one female character is smart enough to kick off her heels before running from the killer, but then she goes and trips, injuring her leg and practically giving herself to the killer on a platter. There is a decent chase sequence with Lisa from the school restroom and through the halls, just like in “Prom Night," that includes a recognizable hissing sound effect ripped right from 1981’s “Halloween II." If “Thriller” does anything interesting at least on the surface, it’s setting a slasher film in South Central, an urban milieu where violence is unfortunately normalized, but even watching it through a contemporary, woke lens, this Blumhouse dud doesn’t reinvigorate the genre in any way.