Rejects Return: "3 from Hell" more of the same hell-raising, only with less of a point 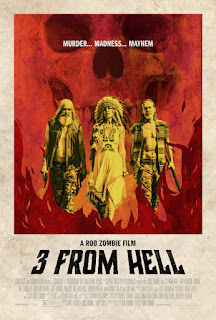 If writer-director Rob Zombie’s 2003 feature debut, “House of 1000 Corpses,” was a deliriously in-your-face Grand Guignol of gonzo funhouse style, shock value, and a lot of screaming, 2005’s “The Devil’s Rejects” marked a distinct departure in tone and style as a gritty road movie in the vein of “The Wild Bunch” and “Bonnie and Clyde,” while still never watering down its vile, sicko nastiness. Both films tracked the mayhem caused by members of the Firefly family, but it wasn't until the 2005 film that Zombie treated them more as antiheroes, not to mean that they were likable and sympathetic but more human, in spite of their despicable crimes. “3 from Hell,” the third entry in this retroactive “Firefly Family” trilogy of sorts, is a little less ugly, if still depraved, but continues on a more slapdash, episodic path after undoing the uncompromising, oddly poignant finale of "The Devil's Rejects." Fourteen years later, this is just more of the same with a story bereft of a point to warrant it being told.

Against all odds, Baby Firefly (Sheri Moon Zombie), Otis Driftwood (Bill Moseley), and Captain Spaulding (Sid Haig) survived their gunshot wounds after playing a game of chicken with the police, cued to Lynyrd Skynyrd’s “Free Bird,” even if their chances for survival were “less than a million to one.” Ten years later when it’s 1988, they are still incarcerated for their numerous hideous crimes and sentenced to life in prison, however, they’ve become infamous media sensations. While Captain Spaulding is executed, Otis escapes with his half-brother, Winslow “Foxy” Foxworth Coltrane (Richard Brake), also known as the “Midnight Wolfman.” In waiting to free Baby from prison, Otis and Foxy hold hostage the prison’s warden, Virgil Dallas Harper (Jeff Daniel Phillips), along with his wife and friends, and coax the warden into sneaking her out. Once the trio is back together, they cross the border to Mexico for a fresh start during Dia de Muertos, albeit not without a little carnage like old times and a face-off with a local Mexican gang out to avenge the murder of Rondo (Danny Trejo).

“3 from Hell” has its merits as a grindhouse prison-break exploitationer, but it’s ultimately a completist's reunion with these characters and a greatest-hits compilation that only takes these grungy, foul-mouthed, homicidal maniacs to a new geographical place—Mexico—to do what they do best: “get fucked up and fuck shit up.” The film is actually at its most unpredictable and dangerous when focusing on Baby, who has lost her mind even more so than before she ended up in prison, hallucinating feline ballerinas, and shares a growing animosity with broken-nosed prison guard Greta (Dee Wallace). Her brutal first kill after prison in broad daylight also ends with a twisted, pitch-black comedic punchline, a friendly wave to an elderly woman sitting in her front yard.

Bill Moseley and Sheri Moon Zombie slide back into their respective roles of Otis and Baby perfectly, dialing up the insanity when they have to with his commanding monologuing and her dementedly flirtatious cackle. Zombie might have the most to do as Baby, and she gets to share the film’s most touching moment with hotel worker Sebastian (Pancho Moler), who brings her breakfast right before the Black Satans come to take them out. Sid Haig, who became ill during production and passed away as of this writing, makes his brief screen time on death row memorable as former clown Captain Spaulding, but Richard Brake is here to take over as the trigger-happy Foxy and gets to strut his comedic stuff, like during an amusing debate on Cagney and Bogart between Foxy and Otis.

Whether or not his grimy brand of filmmaking is anyone's cup of tea, writer-director Rob Zombie always has a specific vision for each of his films, even if this one feels pretty derivative of what came before. Zombie still peppers his dialogue with four-letter words, and he sure likes his zooms, freeze frames, and swipes on grimy 16-millimeter, and all of his characters must at one point be watching an old black-and-white movie or TV show, this time being 1923’s “The Hunchback of Notre Dame” and “The Three Stooges.” It also wouldn’t be a Zombie joint without his on-point selections of ‘70s music, like Suzi Quatro’s “The Wild One,” Slim Whitman’s “It’s a Sin to Tell a Lie,” and James Gang’s “Ride the Wind.” Unfortunately, not unlike his last film (2016’s “31”), many of the murder set-pieces are shakily shot and choppily edited within an inch of their life. There’s a relatively tense bloodbath in the warden’s home, with a hapless clown named Mr. Baggy Britches (Clint Howard) thrown in as collateral damage, that feels interminable compared to the unsparing danger and jittery, claustrophobic tension of a similar extended sequence set within a motel room in “The Devil’s Rejects.” Though it's kind of sweet to see Zombie have trouble saying goodbye to his creations, these natural born killers should probably just go to hell and stay there.