Your Money, My Money: "A Most Violent Year" an expertly told slow-burn with juicy performances 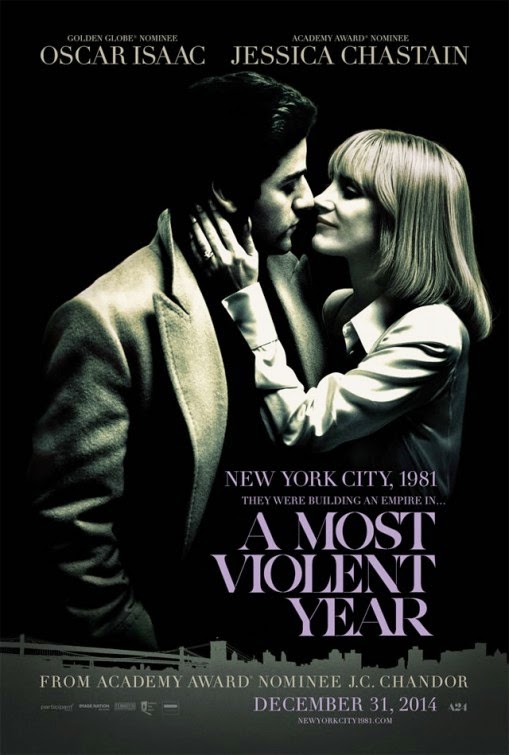 What a fast and early career trajectory. When filmmaker J.C. Chandor broke out on the scene with his debut, 2011 wordy, tensely heated financial chamber drama "Margin Call," it seemed as if it was made with the precision of an auteur. Next up, 2013's "All Is Lost" was Robert Redford's one-man show lost at sea, and while that follow-up was too minimalist for this viewer's taste, the tide of critics fell in love with it. Now, "A Most Violent Year," Chandor's third film, could not be more different, but it displays the growth of a filmmaker whose work is becoming more and more cinematic. Richly scripted and methodically carried out, this character-based morality drama cements itself as the writer-director's strongest piece of work, and while many will find a shortage of thrills they might be expecting, it calls up the mature restraint and sedate, slow-burn pacing of Sidney Lumet and Martin Scorsese back in their heydays. This is one of those "thrillers for grown-ups" in the best of ways.

In New York City, 1981, it was said to be the worst year on record for violent crimes, such as rape and murder. Abel Morales (Oscar Isaac) is an honorable man who prides himself on doing the right thing and not getting his hands dirty. And, like everyone, he wants to attain the American Dream. In Long Island City, he runs a successful, "fair and clean" heating-oil business inherited from his late father-in-law; Abel's wife, Anna (Jessica Chastain), does the books. After one of his fuel trucks is hijacked and his driver (Elyes Gabel) left in the middle of a turnpike pay station, Abel faces the charges of a district attorney (David Oyelow), who launches an investigation into the company's corrupt financial practices and tax fraud. Once Abel moves Anna and their children into a new house, someone sends a message. Will Abel have resort to violence?

A film of merit in its craftsmanship, "A Most Violent Year" simmers deliberately with bursts of violence and lulls the viewer into this dog-eat-dog underworld. First off, it is eloquently shot by cinematographer Bradford Young (2013's "Ain't Them Bodies Saints"), with an impressive tracking shot of Abel jogging opening the story; fluidly cut by Ron Patane (2013's "The Place Beyond the Pines"); and subtly decked out in urban authenticity and period detail. As a storyteller, Chandor doesn't lay all of his cards on the table right away, so to see everything unfold piece by piece is both darkly amusing and deceptively thrilling. Nothing can be seen coming from a mile away, nor does anything feel like a cheat. Being guided by an assured hand, the moderately familiar plot of "A Most Violent Year" builds and builds, albeit not predictably and not without humor or nuance. There are no villains to be served, just people making crooked decisions to survive.

Continuing to impress and work his way into leading-man status after 2013's "Inside Llewyn Davis," Oscar Isaac is understated but layered and riveting as a sympathetic, dichotomous protagonist wrestling with his own moral code and finding the most right path for his life and career. He's like watching an electric Al Pacino or Robert De Niro commanding the screen, though Isaac seethes from the inside rather than letting it all out. As tension builds between Abel and wife Anna, the real force to be reckoned with is the lone female with the most leverage; she is very Lady Macbeth. Adding to her already-superb filmography, the luminous Jessica Chastain's juicy turn is pronounced without feeling exaggerated, as she brings cutthroat ferociousness and pragmatic smarts to her characterization of Anna, a mobster's like-minded daughter who would rather take care of business now than let someone else take their time doing it. When Abel hits a deer with his car and has to put it out of its misery with a crowbar, Anna gets to it first. And, when she tells no-nonsense D.A. Lawrence (David Oyelowo) that he made a regrettable mistake searching their home the afternoon of their daughter's birthday party, her threat feels anything but empty as she flicks her cigarette and fiercely notes, "This was very disrespectful." Circling the two lead dynamite performances, the rest of the supporting cast make the most of their brief appearances, including Albert Brooks, as Abel's weary lawyer; Elyes Gabel, as shaken-up driver Julian; Catalina Sandino Moreno, as Julian's wife Luisa; and Christopher Abbott, as one of the truck hijackers.

Writer-director Chandor proves to be an expert in building pitch-perfect suspense, especially when intercutting between sequences. An enthralling car and on-foot chase onto a subway is a high point, as well as a shoot-out on the 59th Street Bridge, in the way both set-pieces are carefully directed and shot. Even a brief scene where Anna comes home to find her daughter holding the gun a night prowler outside of their home dropped is mounted with such dread, regardless if the poor child blows her head off. The film isn't without a pulse, urgency being renewed in fits and starts. Sometimes, it does feel like there should be more tension and oomph, as if the film could use a lit fuse under its rump. Still, with a quiet electricity percolating in every scene, "A Most Violent Year" is a smart, meticulously crafted film that absorbs and has the viewer in its clutches for its entire 125-minute length. It reminds of "American Hustle" in its theme of survival and interestingly shaded characters with moral ambiguity, but it trades in brassy, colorful entertainment value for more thought-provoking ideas that are less obviously handled. Chandor is shaping up to be a pro.