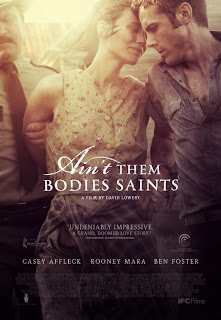 For his first homespun feature after making short films and editing features (he co-edited "Upstream Color" from this year), indie writer-director David Lowery's crime drama "Ain't Them Bodies Saints" looks like a confident piece of work from an auteur. That might be from the film wearing its tonal and visual influences and reference points via Terrence Malick, Andrew Dominik and Kelly Reichardt on its sleeve, but it's still striking on its own. He knows not to spell everything out for his audience and how long to cut away to golden waves of wheat, spinning an intimate story with small moments of unspoken tension and deeply felt lyricism. Then again, given how wistful mood supersedes narrative drive and how simple, subtle storytelling can teeter on lugubrious, it wouldn't come as a surprise if the viewer has two minds about it.

A title card that reads, "This was in Texas…," begins the story. Bob Muldoon (Casey Affleck) and Ruth Guthrie (Rooney Mara) are lovers in small-town Meridian and she's just told him she's pregnant. They're also outlaws, and after a post-robbery shoot-out in their deserted shack with the police where Ruth shoots one of the deputies (Ben Foster) in the shoulder, Bob takes the fall for her and goes away to prison. Years pass and, taking care of Sylvie by herself for three years, Ruth is still waiting for Bob, as Patrick, the same deputy she shot, keeps a close eye on her and might be getting closer to her on a personal level. Meanwhile, Bob breaks out of the slammer and sees it as his higher calling to go back to his wife and little girl whom he has yet to meet. A happy ending most likely isn't in store.

A starkly muted, languid, tersely told 1970s-set western yarn with a doomed love story at its core, "Ain't Them Bodies Saints" tells us all we need to know in the first few minutes. Bob and Ruth mean more than anything to one another, have a child on the way, and are outlaws about to commit a crime that will separate them. Artfully, fluidly shot with texture by cinematographer Bradford Young (2011's "Pariah"), the film evokes a true sense of place in the tranquil heartland of Texas with a shadowy menace under the surface. Daniel Hart's score is haunting, providing a rhythmic clapping that's aurally impactful. It feels like it could have been made in the '70s, but while the exquisite, painterly images are enough to admire, the story is sometimes so narcotizing that its pacing sinks into molasses.

Lowery also elicits naturalistic performances out of his small cast of professionals. As Ruth, Mara is a captivating bottle of conflicting emotions, alternately cold and tender, and completely sells her final scene with Bob. Proving his mettle and that he's more than just Ben's younger brother, Affleck pulls an aching sadness out of his fallible Bob. There are two other supporting characters, though, who provide more interest. Keith Carradine plays Skerritt, a neighbor and sort-of father figure to Bob who looks after his girls while he's gone. He commands the screen as Skerritt's motivations always seem impenetrable. Uncharacteristic from all the insane, bug-eyed villains and oddballs filling up his filmography, Foster shows a gentler, more humane and even ambiguous side as Patrick.

An inevitable journey that leads to its final emotional beats, which are unforeseeably poignant, "Ain't Them Bodies Saints" is destined to be admired rather than liked. The simplicity of it all can try one's patience, but the spellbinding constant is Lowery's careful hand behind the camera as if he's been a reliable filmmaker for decades. Despite the deliberately awkward title that means nothing (it's apparently just a mispronounced lyric from a folk song), nothing calls too much attention to itself. And even if the story doesn't necessarily add up to a whole lot by the end, Lowery has already established a big future for himself.