Sprawling, absorbing "Place Beyond the Pines" shoots for greatness 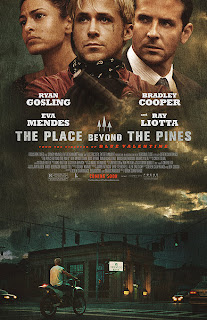 If Derek Cianfrance's "Blue Valentine" was an intimate, heartbreakingly hopeless look at the slow disintegration of love, his latest film, "The Place Beyond the Pines," is a sprawling, heady generational drama with tragedy and a glimmer of hope. Co-written by Ben Coccio and Darius Marder with Cianfrance, the film is the director's less concentrated but most ambitious so far and, flaws and all, it's an absorbing, affecting, and rewarding saga of guilt, fate, and fathers and sons.

Structured as a novelistic triptych, "The Place Beyond the Pines" is divided into three sections, all set in Schenectady, New York, the city derived from the Mohawk Indian word for "place beyond the pine plains." Ryan Gosling plays Luke, a lonely, chain-smoking motorcycle daredevil for a traveling carnival who runs into his former fling, a waitress named Romina (Eva Mendes), and discovers her 1-year-old son is his. His job calls for him to leave Schenectady but he quits and sticks around to take responsibility for the child and Romina, even though she's living with a new man, Kofi (Mahershala Ali). In order to provide for Romina and their son, Luke takes on a job with a mechanic, Robin (Ben Mendelsohn), to rob a bank. "If you ride like lightning, you're gonna crash like thunder," Robin warns Luke. After getting the hang of being a bandit and having noble intentions, he has a pivotal encounter with strait-laced rookie cop Avery Cross (Bradley Cooper). Like Luke, Avery has a family to provide for and his heroic act leaves him injured and pressured by some crooked colleagues (including a chillingly scummy Ray Liotta) and his worried wife (a naturalistic Rose Byrne). Fifteen years down the road, Luke's troubled teenage son, Jason (Dane DeHaan), and Avery's  son, A.J. (Emory Cohen), coincidentally become friends and the sins of their fathers have reverberating consequences.

"The Place Beyond the Pines" is one of those films that hands over the baton threefold "Crash"-style, directly linking its path-crossing stories somehow and coming together as a whole. At a whopping but justifiable 140 minutes, the film has enough breathing room to explore its characters, and it wouldn't have hurt to see an even longer cut. One could say that the gear-switching bites off more than it can chew with too many eggs in one narrative basket, but even when relying on plot contrivances to connect the dots, the three-part structure is essential to this film's thematic aims. Cianfrance and his screenwriters deftly weave these three stories into a somber, powerful, and dramatically satisfying tapestry without coming off as precious or diminishing itself. It's schematic, but still unpredictable, and leisurely paced, but not boring, trusting that we're attentive enough to stay with it and do some of the legwork on our own.

Sean Bobbitt's gritty, arresting hand-held cinematography and Mike Patton's haunting score work hand in hand in building a foreboding mood and layering it with dread and danger. Each segment has its own visual moment, including Luke's first robbery and getaway and a kinetic, urgent police chase to a hideout in a stranger's house; a few unbearably tense scenes involving Avery and a band of corrupt pigs; and Jason's oxycotton-fueled revelation at a house party. Also, recurring throughout, there is a beautiful tracking shot of someone riding down the narrow roads of a pine forest that almost becomes a character itself, hence the title.

The performances register so effectively that they keep everything grounded and resonant. Gosling and Cooper, as well as DeHaan and Cohen, really anchor the film. Coming off his internal tour de force two years ago in "Drive," Gosling has found his niche in playing brooding, smoldering gearhead types. Grunged-up and tatted all over his body (with a teardrop tattoo right underneath his left eye), he rawly draws Luke beyond his tough rebel-like exterior as a complicated man of inner goodness and an erratic side. Cooper, made to look like a Regular Joe early on, is on a roll after "Silver Linings Playbook," tackling a character of moral complexity with an uncharacteristic understatement and a few showier moments. DeHaan, an out-of-nowhere newcomer turned legitimately talented actor on the rise, shows intensity in contrast with his wiry build and newcomer Cohen, displaying a convincing swagger as a pot-smoking, trash-talking delinquent, is startlingly impressive. Finally, Mendes, despite her limited screen time, does what might be her best and most detailed work as a young mother trying to make ends meet.

Since there are only so many stories to tell, originality can be a dying breed in cinema. But Cianfrance and his cast pull off a conventional story, rarely shortchanging its characters, often subverting our expectations, and never having the safety on. In this story (or, all three of them), there are heroes and bad guys but also a gray area and a moral center. "The Place Beyond the Pines" has an admirably epic scope but still remains intimate and riveting with a lingering emotional impact.