He's on a Boat: "All Is Lost" almost too stripped-down to be worthwhile 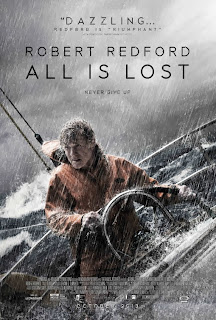 The old adage goes that some actors are so mesmerizing, audiences will flock to see a pro read the telephone directory. "All Is Lost" is very much like that, resting on 77-year-old Robert Redford facing the slings and arrows of the treacherous sea, except there's nothing to read that's longer than one script page. Save for the beginning narration of a letter, an attempt to make an S.O.S. call, and one word that would be a release for anyone in the same situation, the film is free of dialogue. It's also a far, far cry from writer-director J.C. Chandor's previous film, "Margin Call," which was talky and overpopulated by actors sitting in board rooms of a Wall Street firm. Here, billed only as "Our Man," Redford is in every scene and doesn't even have a volleyball to play off. The film itself is more of a minimalist, boldly unconventional cinematic stunt, missing the boat by barely sustaining itself as a thriller and lacking the profundity to be a profound meditation on survival and the brevity of life.

Stripped-down, spare, and never jazzed up with forced Attention Deficit Disorder-style editing, "All Is Lost" won't mix well with impatient viewers, especially those cluelessly expecting a high-seas action adventure. Adrift on the Indian Ocean aboard his yacht called the Virginia Jean, an older man (Redford) wakes up to find water rushing into the lower cabin, realizing that a shipping container has punctured a hole. He spends his day patching up the hole and pumping out the water, and contacting help on his CB radio before a violent storm hits. What happens is inevitable, as he's eventually forced to abandon the ship and hop on a life raft. With his resources (and luck) dwindling, Our Man can only hope that help will arrive in time before he's lost forever.

There's no denying the film is impressive in its execution and takes the rules of visual storytelling quite literally, "showing" rigorously trumping "telling" through the picturesque cinematography by Frank G. DeMarco and Peter Zuccarini. Tension mounts whenever the storm surges or the schools of fish grow and grow underneath the man's raft. Above all else, the septuagenarian credibly holds the screen with his weathered but still handsome face, surprising physical agility and everyman presence. With no name, backstory, or development outside of his morning, noon and night labors to keep his boat afloat, the character could be Redford himself. He's something of a cipher but self-reliant, resourceful, and, for a long while, patient. In fact, it's pretty surprising how much time passes before he lets out his frustration with that cathartic four-letter word to the heavens. At this point in his life, there is something special about watching Redford take such a challenge and completely give himself to a one-man show, as he's asked to just "be" and convey everything through his actions and in his face.

With Chandor's bare-bones screenplay comes feelings of contradiction. Since this is a simple survival story, the point might be that Our Man can only live in the present if he wants to stay alive, no matter if he has a family waiting for him back home. On the other hand, if we knew more about his life other than that he likes to read, eat pasta, and is savvy enough to turn salt water into refreshing drinking water, we would have more to grab onto emotionally. Judging by the wedding ring on his finger, he's married, or is he a widower? We assume he's wealthy, hence the yacht, but why is he here? Why does he bother shaving when a storm is about to hit? Seriously, where's Wilson when you need him? The deeper question: why are we here?

With "Gravity," "Captain Phillips," and now "All Is Lost," it must be the year of isolation and survival. Moving between deliberately mundane to progressively more harrowing, it's hard to imagine any viewer being consistently captivated or bored stiff by the whole of "All Is Lost." The screenplay doesn't have enough meat to it that its existentialist aims are neither here nor there. Nothing is learned about our protagonist to truly care or be moved. The spikes in action could resemble the slow-moving lines on a heart monitor. If the literal or symbolic ending has any effect on the viewer, it's a testament to Redford, so the film deserves a soft recommendation for our everyman commanding our attention for long stretches as much as he does. The other good news is that if you're looking to take a yacht out to sea, not all will be lost — you'll learn something from this informative preliminary video.