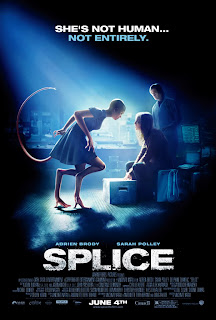 Make a baby? Sure, why not. Adrien Brody and Sarah Polley, who respectively expose their member-shaped nose and gummy smile to mad-scientist effect, are committed to playing Clive and Elsa (both allusions to "Bride of Frankenstein"), romantically linked rock-star biochemists. They make a proposal to their money-strapped pharmaceutical company to work human DNA into their experiment, but are denied. Of course they still follow through on their experiment and keep it a secret, resulting in their mutant creation: a half-human, half-thing baby they name Dren (that's “Nerd” spelled backwards, also the acronym of the splice lab). Elsa, who has doom-and-gloom mommy issues, seems gratified to be a mother of sorts, while Clive thinks they made a mistake.

Director Vincenzo Natali's nifty, gooey "Splice" is a crossbreed of "Aliens," "The Fly," "Species," and "Frankenstein" (that's Fronkensteen!), and altogether it's certifiably nuts and breaks the safe zone. With Antoinette Terry Bryant, Doug Taylor, and co-writer Natali's smart, intriguing script of the “scientists-tampering-with-nature” premise, the movie is thoughtful, cheeky, and creepy, then mutates into something over-the-top and well aware of its own insanity. One giddy, splattery moment gets a laugh when the front row of suits at a convention turns into a splash zone by the blobby organisms' massacre. And that really is French model-actress Delphine Chaneac, playing the young adult version of Dren, who does a great job with body language and head tilts. The creature effects by Howard Berger are first-rate and seamlessly convincing; you can barely tell the difference between the actress's real body and the CGI chicken-dinosaur-kangaroo legs and stinger tail.

"Splice" gets crazier and crazier, and really goes there (especially in one disturbingly icky sequence you hope is a dream but isn't), splitting off from scientific ethics into the psychosexual with some daringly twisted, provocative ideas about creation, family, and maternal instincts. It's like Sigmund Freud and David Cronenberg's royally messed-up, Oedipal baby. The "Jeepers Creepers"-esque horror climax is more conventional than the rest, but has a snowy, cool atmosphere in the woods by Elsa's old family farmhouse, and the "Rosemary's Baby" conclusion sets up for a “Spwice” (?). Will casual moviegoers be ready for "Splice's" shocking schlockiness? Probably not. It's so wildly loopy, weird, and queasy by design that the picture itself has a mad-scientist quality, but take it as a totally cracked advancement in mad movie science.