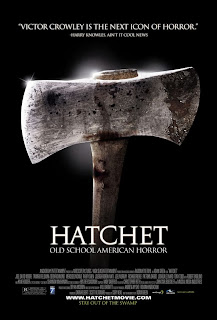 A group of victims-to-be celebrating Mardi Gras decide to go on a haunted swamp tour that gets them stranded in the gator-infested New Orleans bayou, where the local legend of Victor Crowley (Kane Hodder, who played Jason from "Friday the 13th Part VII: The New Blood" through "Jason X"), a deformed madman, comes to life. Do you think they'll all get picked off one by one?

Stop us here if you've heard this premise before, but "Hatchet" is a well-directed, gleefully gory, and campily entertaining retro-slasher. After a gnarly one-two punch opening of blood and guts a spillin', the next half hour is a long, dry wind-up until the slashing gets started again but does a fine job of setting up the characters first. Though not particularly scary or original, "Hatchet" still keeps the stakes high like a horror film should. Suspense is sustained in the dark, swampy milieu; the insane, blood-spurting kills thankfully aren't predictable; and Victor Crowley is an insidious monster creation. He is a bit like Jason Voorhees. Both were deformed kids and now ruling the woods, they kill anyone that trespasses his home. Also, Victor is vaguely supernatural like Jason in that he gets right back up even after being shot and stabbed.

Joel David Moore makes for an unconventionally nebbish, likable hero (and gets to vomit for real on cue); Deon Richmond is amusing as the token black guy; and Mercedes McNab and Joleigh Fioreavanti are very funny as bimbo "serious" actresses Misty and Jenna, shooting a "Girls Gone Video"-type movie with their skeezy soft-core director. Tamara Feldman, as the mysterious Maryjane, is the toughest of the bunch but still has vulnerability. There's something comforting about including the dorky-funny Patrika Darbo and Richard Riehle, as the older, touristy Permatteo couple, in the motley crew of younger characters. Even so, that doesn't make them safe for the body count.

Taking after splatter pics of the '80s, "Hatchet" never betrays its modest-to-low budget with cheesiness but an abundance of gore, and sports a playful sense of humor about itself. If the horror genre is your cup of tea, it's good fun, with vets Tony Todd (Candyman), Robert England (Freddy Krueger), and Josh Leonard (Josh from "The Blair Witch Project"), all hamming it up in bonus cameos. Green doesn't reinvent the genre, but if you like your buckets of blood plentiful and over-the-top, there's a scrappy charm about "Hatchet." Green surely has a cult classic on his hands, as well as a sequel, judging by one of those cut-to-black endings. 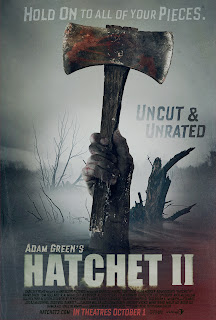 Fangoria subscribers don't ask for a lot – a lotta gore, some nudity, and maybe more gore galore. But "Hatchet II," an unblushingly gory and cheap sequel to the amusing 2007 throwback, expands onto backwoods legend Victor Crowley's backstory . . . probably more than we'd really care to know. Picking up immediately on the last frame that "Hatchet" ended on, survivor Marybeth (scream queen Danielle Harris taking over for Tamara Feldman) escapes from Victor Crowley's tour-boat massacre in the New Orleans swamp. But she wants revenge on Crowley for killing her daddy and brother, so Reverend Zombie (Tony Todd) offers up a hefty reward to a bunch of nitwitted rednecks with guns if they kill the monster.

Early on, writer-director Adam Green makes some amusing don't-blink-or-you'll-miss-them nods to his own "Frozen" (and he gives a cameo as a puking partier), as well as name-dropping to Jason Voorhees and "Behind the Mask: The Rise of Leslie Vernon." Harris elevates any film she's in but her performance here is weak and hysterical, and the horror-movie stunt casting adds "Fright Night"/"Child's Play" director Tom Holland to its list.

The lamely unfunny dialogue doesn't help a soul, and the swampy cinematography and repetitive scenes of blood splattering on tree trunks dull the gruesomely over-the-top, unrated money shots into hatchet jobs. Green doesn't skimp on gore, but a curb-stomp kill of sorts (eat your heart out, "American History X") and Tony Todd's send-off are the only novelties. People splitting up in the woods to get torn apart in bloody ways can be fun, but "Hatchet II" is too much of a witless bore to really matter. One character calls Victor Crowley a “repeater,” a monster that keeps coming back, but here's hoping he doesn't get a whole franchise like his ancestors Michael and Jason.