"Let Me In" reprise just as good 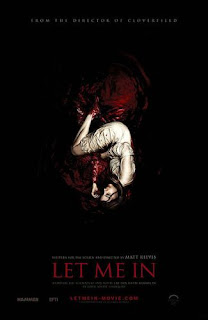 Before you wince at an American reiteration of the perfect Swedish boy-meets-undead-girl keeper "Let the Right One In," have no fear "Cloverfield" director Matt Reeves' "Let Me In" is just as good. (Maybe proof that Hollywood won't fudge up other remakes to come, i.e. "The Girl with the Dragon Tattoo?") In fact, "Let Me In" is just as much of a creepy, touching, tragic, and artfully beautiful picture. Again, the film is about the friendship between two young lonely misfits and the connections they make with one another.

Kodi Smit-McPhee and Chloë Grace Moretz are excellent as the bully-tormented 12-year-old Owen and Abby, who needs blood to survive and has been 12 “for a long time.” Right up to par of their Swedish counterparts, Smit-McPhee has a lanky frame and even more of an androgynous look as the underdog, and Moretz brings a sense of regret and struggle. These two know their characters inside and out, making the film all the more emotionally sound. Richard Jenkins is also very good and quite moving as Abby's downtrodden blood-hunter guardian/slave, upping the emotional bond here while the original left it more to ambiguity.

The story is still languidly paced but potent, Reeves' script stripping the story clean and focusing all on Owen and Abby (Owen's mother's face is even barely seen). The quiet stillness and atmosphere are still intact, as are certain key shots. Reeves has a subtle visual wit, one involving reflective TV screens of the Reagan era (always a subtext for horror films) and another being a back-seat attack in front of a 7-Eleven (with Blue Oyster Cult's “Burnin' for You” on the radio a nice touch). The accident that follows that attack is brilliantly filmed and jaw-dropping to boot. To the maker's credit, he puts just enough interesting, distinctive variation on primal sequences (acceptably excising the original's cat set piece) to call them his personal own.

Some of the special effects during Abby's tree-climbing and thirst attacks are noticeably jerky and Reeves seems to go for more splatter effect but little of the startlingly intense violence loses its impact. The wintry exteriors in Los Alamos, New Mexico, especially the jungle-gym courtyard, are equally chilly substitutes for the original's Stockholm locations. Michael Giacchino's horn-and-drum score adds moody effect but sometimes overstates itself more than it needed.

Although jaded about watching practically the same film, both anti-"Twilight" coming-of-age films have something special to offer . . . not shirtless werewolves. Encouragingly, "Let Me In" can stand alone and alongside its predecessor—it's no dumbed-down, uninspired imitation.