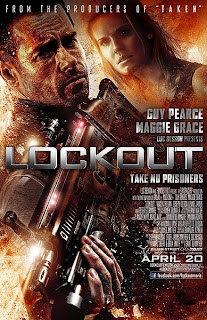 France's action movie purveyor Luc Besson gives himself a break from directing in Hollywood, but he gets to "present" and receive a credit for the "original idea" behind "Lockout," a derivative in-space actioner. What is essentially "Die Hard" married with elements of "Escape from New York" and "Con Air" doesn't really merit "original" to describe it. With the movie being released the same weekend as "The Cabin in the Woods," it wouldn't take a rocket scientist to pick the obvious choice with more imagination, style, and wit, but that's a moot point since there's no comparison. Disposable but entertaining in the moment, "Lockout" makes no bones about what silly, dumb junk it is, and for that, should be judged on its own merits.

The year is 2079, and ex-CIA operative Snow (Guy Pearce) finds himself being grilled by the head of the Secret Service (a hammy Peter Stormare) for being accused of conspiracy and murder. He knows he's been framed, but the only evidence that could possibly save him is in a briefcase, which was left with his partner Mace (Tim Plester), who's now locked up in maximum security prison floating in space called M.S. One. There, all of the inmates, including Mace, are kept in a state of stasis. Meanwhile, on a "humanitarian errand," the president's daughter Emilie (Maggie Grace) is at M.S. One, interviewing one of the crazy-eyed inmates, until one of her Secret Service agents makes a dumb move and there's a prison takeover by the vicious inmates. The president and the government's only chance to rescue Emilie, as it turns out, is to have Snow go in.

Though it's played totally straight and visually looks cold and drab, not an ounce of "Lockout" is intended to be taken seriously. Co-written by rookie directors Stephen Saint Leger and James Mather with producer Luc Besson, the script is so ridiculous and riddled with leaps in logic (and physics) that the viewer might as well suspend all disbelief and enjoy the ride. But on the level of a schlocky no-brainer, it's briskly paced and competently made. The lower-than-most-tentpoles budget is confirmed early on in a freeway chase, Pearce's face obviously slapped onto a computer avatar riding a motorcycle. It's so videogame-phony that it's laughable, but that's part of the movie's cheesy charm. Otherwise, Leger and Mather admittedly get some mileage out of every corner of the space station, as Snow and Emilie outrun and outwit the mob of murderers. Once the action leaves the space station, the movie resorts back to the business involving the briefcase, which turns out to exist merely as a MacGuffin. And in order to wrap up supposed loose ends, there's even a double-crossing twist, but it's pointlessly tacked-on.

Part of the reason "Lockout" mostly works is for the magnetic presence of scruffy, chain-smoking Guy Pearce. He's the most fun he's been in a while, putting on a game face and tossing off smart-assy one-liners as if sarcasm is all Snow knows (i.e. "It was coupon night, and I was trampolining your wife" and "I'd rather castrate myself with blunt rocks"). A few of the wisecracks inevitably clang, and Snow is somewhat of a glib jerk, but Pearce makes him a roguish anti-hero that's fun to watch. Even if Emilie has little personality, Grace perseveres without being just another damsel-in-distress. When Pearce and Grace hook up, they share an oil-and-water rapport that's amusing. Joseph Gilgun, as the lead psycho Hydell, is perfectly despicable, but so over-the-top it seems like an impression of Robert Carlyle crossed with Chris Pine's neo-Nazi nut in "Smokin' Aces."

"Lockout" is strictly a B-movie programmer that's never as good or bad as it might've been. It's the kind of decent time-killer you could give a shot to on the SyFy Channel or the USA Network if there was nothing new on HBO.