DVD/Blu-ray: "Red Lights" starts out intriguing, then burns out 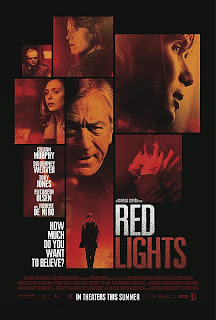 Opinions are like assholes; everyone's got one. "Red Lights" has been lambasted as a borderline-campy disaster by the majority of overreactive critics, but a disaster this is not, just a remarkable disappointment. After trapping Ryan Reynolds into a wooden box for 2010's tense stunt "Buried," Spanish writer-director-editor Rodrigo Cortés now takes on the writing duties, assembles an impressive ensemble, and introduces intriguing ideas about rationality, faith, and skepticism for a potentially auspicious myster-thriller. Alas, by the end of "Red Lights," the air gets sucked out of the story and most of the film's built-up good will is lost.

In some big city (but filmed in Barcelona), skeptical, no-nonsense professor Dr. Margaret Matheson (Sigourney Weaver) and her young partner, physicist Tom Buckley (Cillian Murphy), specialize in investigating and debunking paranormal phenomena. They investigate theatrical so-called clairvoyants and, with technology, expose them as quacks. Then, the blind, Uri Geller-type psychic/healer Simon Silver (Robert De Niro), who suddenly disappeared after a skeptical journalist suffered a heart attack during his last act, finally comes out of retirement for one last tour—bend metal (i.e. spoons) and performing telepathic surgery are just two of his jaw-dropping tricks. Though Matheson tells him to stay away, Tom wants to investigate Silver. Is Silver really the great and powerful Oz, or just another charlatan?

For its first half, "Red Lights" gets off to a promising and pretty absorbing start. Weaver is in great ball-busting mode; her cynicism is fun to watch, and she adds some heartbreak in her backstory concerning her comatose son. The film also deserves points on technical prowess. Accomplished through Xavi Giménez's brooding cinematography and keeping the lighting as dim as possible (is this Gotham City?), the film has a classy, menacing look and a nicely atmospheric mood. Then again, Cortés goes for a few too many easy "boo!" moments (a phone rings, a bird hits a window, someone suddenly appears at a window, etc.), accompanied by loud musical jolts, that they just become silly.

On paper, the cast couldn't be better, but aside from Weaver, not many of the performances stand up to close scrutiny. Murphy is well paired with Weaver, but when the narrative changes its focus to him, his performance descends into such a high pitch and the character begins to make less sense. A major, on-the-rise talent like Elizabeth Olsen is given next to nothing to do as Sally, one of Matheson's students. Because the film needed to incorporate a young female, she tags along with Matheson and Tom, and then suddenly becomes Tom's love interest. Joely Richardson also has her back to the wall, relegated to being De Niro's arm candy as Silver's manager. Toby Jones, as one of Matheson's ESP-testing colleagues, and Craig Roberts (who was so excellent in "Submarine"), as another student, also go to waste. Finally, as De Niro performances go, this one isn't as lazy ("Little Fockers"), amusingly hammy ("Machete"), or as wasted ("Killer Elite"), but just average. Initially, he effectively dials it down, and thereafter turns up the histrionics. At least he gets to hide behind some cool shades.

Once a key character takes his/her exit near the halfway mark, the plotting becomes clunky and slowly comes apart when it should be building to a showdown of wits or something sinister. Instead, Cortés pulls a fast one on us, unless you knew Bruce Willis was dead all along in "The Sixth Sense," with a sleight-of-hand twist that is underwhelming, overwrought, and overexplanatory nonsense. It's a fraud itself, failing to coalesce with everything that came before and turning out to be less high-minded than anyone thought it was. With an effective thriller ahead of this one, Cortés' "Red Lights" will be remembered as no more than a half-ambitious, half-dissatisfying footnote in his career.