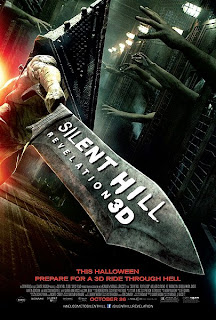 An initially effective horror francise jumped the shark with last week's fatigued "Paranormal Activity 4," but the "Silent Hill" movies never really had a shark in the first place. Six years ago, the original "Silent Hill" (based on the Konami video game) amounted to a mostly joyless, overproduced 125 minutes of clomping around, vague storyelling, and impressive art direction with nightmarishly creepy imagery that seemed hopped up on psychedelic mushrooms. But it takes a dreary, senseless sequel like "Silent Hill: Revelation" to put into perspective just how underappreciated the first movie was. This unentertaining dreck purely exists for 3-D and box-office sales for the Halloween movie season, and offering any worthwhile revelations turns out to be a fruitless endeavor.

Soon to be 18, Heather/Sharon (Adelaide Clemens) has been having bad dreams and day visions about the ash-covered town and her demonic doppelganger, Alessa (played by the young Erin Pitt and then Clemens herself in Juggalette make-up). Her father, Harry/Christopher (Sean Bean), has moved them both to a new house after his long-gone wife, Rose (Radha Mitchell, appearing briefly in the mirror), brought their adopted daughter back to him. Used to changing schools a lot, Heather attends her new one with a chip on her shoulder and tries with all her might to disinterest another new student named Vincent (Kit Harington). She never dreams of actually going to Silent Hill, but when Dad gets kidnapped by the town's doomsday cult, Heather has no other choice but to enter the alternate reality with Vincent. Remember: when characters are warned never to go to Silent Hill, they go anyway.

No better but much worse than its 2006 predecessor, "Silent Hill: Revelation" rights few of the wrongs and repeats the same mistakes. Aside from sparing us with a leaner 94-minute run time, writer-director Michael J. Bassett (2012's "Solomon Kane") builds up to Heather's trip to the town with a lot of lollygagging and then insists on explaining everything through notebooks, newspaper clippings, and tedious expository dialogue. There's also some gobbledygook involving a medallion laughably called "the Seal of Metatron" that "unlocks the true nature of things," but none of it is clearly deciphered for it to matter. In case you missed the original, there's no need to panic (really, no need) because this one covers some of the Alessa/witch-hunt lore all over again. Unfortunately, even most of the visuals and grotesque creatures feel less disturbingly creepy and far more cheaply digitized the second time around. That goes for the pyramid-headed executioner and the busty, facially deformed nurses that orgasm as they swipe sharp tools at Heather and Vincent.

Australian actress Clemens, who looks like the long-lost sister of Carey Mulligan and Michelle Williams, fills her duties just fine, but the wooden dialogue gives her no chance to rise above a TV-level performance. Ditto for Harington. As villainous townies, Carrie-Anne Moss and Malcolm McDowell are clearly slumming it: she sports Gandalf's hair but doesn't have any fun with the material, and the literally chained-up actor goes for high camp. Martin Donovan must have had some free time, so he clocks in to stand around as a private investigator (or, another exposition-spouting device) and then get killed off. The only returnees are Bean and Deborah Kara Unger, who shows up for a single scene to say "the darkness is coming!" as Alessa's ragged mother.

Atmosphere and scares are nonexistent, unless a Pop-Tart popping out of the toaster makes one jump. No matter how many times a horror movie employs flickering lights and shadowy figures walking past the camera, they feel tired even the hundredth time. Save for traces of Jeff Danna and Akira Yamaoka's memorably eerie score, the soundtrack has a noisy eek! for every moment something charges at Heather. One of the better set-pieces doesn't even exist in the ghostly town but in a shopping mall, and there's a niftily designed arachnid made of mannequin parts that deserved more screen time, but an amusement park-set climax is awfully lame. Though it deserved to go straight to DVD, "Silent Hill: Revelation" will most likely get the silent treatment in theaters anyway. A third trip to Silent Hill isn't necessary at this point. 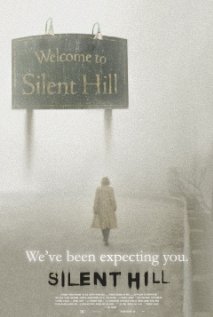 Most movies based on video games suffer on the big screen when they have to be scripted and acted. "Alone in the Dark" was one of 2005's worst movies, and "Doom" wasn't much better. 2006 saw the spawning of yet another video game movie that is "Silent Hill," and it's more accomplished on a technical and visual level, but it still doesn't quite get there. Director Christophe Gans (2001's "Brotherhood of the Wolf") and screenwriter Roger Avary (2002's "The Rules of Attraction") try making sense of this video game-y world for non-gamers, but the finished product mistakes sloppiness and confusion for ambiguity.

When her adopted daughter Sharon (Jodelle Ferland) begins sleepwalking and speaking of an obscure place known as "Silent Hill," desperate mother Rose Da Silva (Radha Mitchell) ends up finding the place and losing her daughter inside the foggy, ash-snowing West Virginia ghost town. Her first clue to stay away should have been from a waitress' ineloquent warning, "Road don't go through no more." If Rose wants to find Sharon, she must "face the darkness of Hell," which includes Alessa (a fiendish Ferland), who could be Sharon's twin. Meanwhile, Rose's husband Christopher (Sean Bean) goes searching for his family in Silent Hill, where he's accompanied by a detective (Kim Coates), but there's no sign of them.

Inspired by the Konami survival horror video game, "Silent Hill" sounds like it'd be an above-average "Twilight Zone" feature, but it's largely two-plus-hours of repetitive running around. Which seems to happen every fifteen minutes, a siren sounds over the town before "the darkness comes" and Silent Hill transforms into a black-as-ash otherworld. Walls decay, cockroaches chase Rose, a pyramid-headed figure drags around a giant knife, ghoulishly faceless nurses wield scalpels and seem to be doing the "Thriller" dance, etc. It'd be a lie to not call "Silent Hill" a great-looking production of atmosphere and surreal, startlingly nightmarish style, with some of the most imaginatively grotesque and truly hellish imagery seen in a long time.

On the flip side, there might be too much CGI. Some of the darkly lit sets for this world are so obviously shot with a green screen that the danger rings hollow, preventing the movie from having much "there" there. And when Avary tries explaining the town and its witch-hunting fanatics with scratchy historical reels and expository dialogue, the backstory will still elude even the most close-watching audience member. Jeff Danna and Akira Yamaoka's musical score is at least effective, blending foreboding menace and vaguely innocent, off-kilter piano keys. Then there's the dialogue, which is so laughably stilted and state-the-obvious ("You saw that right?," "It's happening again," "They used to say this place was haunted…I think they were right") that it makes one wonder why Hollywood ever banned the making of talkies.

Mitchell draws enough empathy—her Rose is a devoted mother who won't give up on finding her daughter—and because of her, we're never in doubt that Sharon really is hers, but the role merely asks her to clomp around with a flashlight or a lighter (which, with all the running she does, seems to never flicker out) and shout out "Sharon!" over and over. Alice Krige brings a sinister presence to the role of a Christian cult zealot named Christabella who sets "witches" on fire, but as the overly nosey Cybil Bennett, Lauren Holden's leather-clad cop wardrobe seems more designed for a strip-o-gram cop.

It might be worth recommending as a purely hyper-visual horror film, but the slick visuals and fake blood are in the service of a lot of baffling nonsense at a needlessly long 125 minutes.