"Sleepwalk with Me" slight but amusing, insightful indie 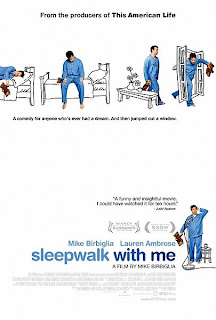 Before co-writing, co-directing, and starring in his feature debut "Sleepwalk with Me," comedian-turned-playwright-turned-actor-and-filmmaker Mike Birbiglia starred in Comedy Central specials and opened an off-Broadway one-man show. His stand-up comedy monologue on host Ira Glass' public-radio program "This American Life" brought about a book and now his film of the same name. The brainchild of Birbiglia, co-director Seth Barrish, and co-writers Glass and Mike's brother Joe Birbiglia, "Sleepwalk with Me" is a semi-autobiographical slice-of-life indie about an aspiring stand-up comedian who isn't funny right away. The film itself is the same way, until the protagonist, a fictionalized version of Birbiglia, comes into his own and finds his voice.

Sleepwalking through his life, Matt Pandamiglio suffers from a failure to launch: he writes his own stand-up material but works as a bartender at a New York comedy club; he's been with his girlfriend Abby (Lauren Ambrose) for eight years, who might be the best thing in his life, but puts off proposing to her; and he even begins having a literal sleepwalking disorder but postpones scheduling a sleep study. Once Matt stumbles upon a comic's agent (Sondra James, who's a hoot), he picks up some out-of-town gigs, which means being away from Abby. On stage, he comes off nervous, stuttering and rambling through cringingly unfunny jokes, but that changes when he starts incorporating real life into his 11-minute sets ("I'm not going to get married until I'm sure that nothing else good can happen in my life"). It becomes obvious that Abby is ready to get married, based on their Tivo being overloaded with wedding-related shows, but the couple's strained relationship seems doomed because they don't want to hurt each other. Harmlessly mistaking a clothes hamper for a jackal, Matt's sleepwalking then becomes more dangerous when he jumps out of a two-story hotel window. Something is bound to give.

As Matt, Birbiglia has an awkward, unassuming everyman quality, often skirting the line of annoyance, but humble likability and average-schmo relatability rule in the end. He's a sad sack that you want to see shake off his pre-midlife crisis and finally take control of his life. The lovely Ambrose is a beacon of light as Abby; her character is supportive and never strays into a shrill, ball-busting cliché. James Rebhorn and Carol Kane also lend reliable support as Matt's tight-assed father and dotty mother. Given a scene apiece, Alex Karpovsky ("Tiny Furniture" and HBO's "Girls") plays a stand-up comic whose career has already taken off and the quirky Kristen Schaael is the emcee of a scantily attended lip-syncing contest.

There might be a bit too much fourth-wall-breaking narration from Matt behind the wheel, but that's how the novice filmmakers frame their story. Luckily, the talking-to-the-camera stuff is interspersed more evenly as the film goes along. Birbiglia and Barrish nicely transition the surreal dreams during Matt's restless slumber with physical enactments of his nightly walks, and capture the unappealing on-the-road life of a comic desperate for low-paying gigs. For a movie about stand-up comedy, "Sleepwalk with Me" is pretty amusing and refreshingly absent of profane, lowbrow humor. It's also too slight to gain the impact it strives for, but still hits plenty of honest, melancholic notes in its observations of human growth and balancing a personal life with a professional one.