The Taming of the Fanboy: Whedon's "Much Ado About Nothing" frothy but slight lark 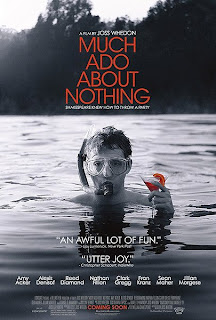 Following his success of "The Avengers" and during post-production of that mega-budgeted bonanza, fanboys' most respected idol Joss Whedon scaled down to DIY, on-the-cheap filmmaking and words, not heavy-duty action, with William Shakespeare. With "Much Ado About Nothing"—a modern reinterpretation of the Bard's frothy battle-of-the-sexes play—Whedon adapted, directed, produced, scored, co-edited, and even shot this small, black-and-white dream project in he and his wife's Santa Monica house for twelve days with his friends, but it doesn't reek of self-congratulatory back-patting, thankfully. Playing out like an English class exercise in Whedon's own backyard, "Much Ado About Nothing" is an amusing, occasionally charming trifle at best but still fun to watch for the time being.

As the story goes, ex-lovers Beatrice (Amy Acker) and Benedick (Alexis Denisof) are engaging in a "merry war" over the course of a weekend at the estate of Leonato (Clark Gregg). When good friend Don Pedro (Reed Diamond) comes to the house, along with criminal brother Don John (Sean Maher) and his "men," Borachio (Spencer Treat Clark) and Conrade (Riki Lindhome), a secondary romance blossoms between soldier Claudio (Fran Kranz) and Hero (Jillian Morgese), Leonato's daughter and Beatrice's cousin. The chaste couple quickly decides to go to the altar, but Don John sabotages the arrangement, tricking Claudio into thinking Hero is unfaithful. Meanwhile, the friends and maids conspire together to get Beatrice and Benedick to confess their love for each other since it's love at first hate. And, if you remember, no one tragically drinks a poison or takes their life with a dagger in the end.

Throwing Shakespeare's text into modern times isn't exactly a novel wrinkle, as the '90s and '00s were full of teen comedies—"The Taming of the Shrew" was retold in "10 Things I Hate About You," "A Midsummer Night's Dream" became "Get Over It," and "She's the Man" dumbed down "Twelfth Night"—and teen tragedies—the Bazz Luhrmann-ized "Romeo + Juliet" and "O" was abbreviated from "Othello." But, like Kenneth Branagh's traditional 1993 take (coincidentally, that director would go on to direct "Thor"), Whedon keeps the witty wordplay intact, despite the transplantation from Messina on the island of Sicily to Santa Monica. With that said, it does take time to get acclimated for those who aren't true-blue Speare-heads or haven't audited a high school class lately, but after the film hits its stride, the meaning of the verbiage is decoded through the action.

Every actor in the Whedonverse (those who have previously worked with him in his TV shows "Buffy the Vampire Slayer," "Firefly," "Angel," and "Dollhouse," as well as films he's written or directed) gets to dig into the iambic pentameter, but some of them come off more forced than others in trying to match the language and rhythm. Acker absolutely shines as the headstrong Beatrice, feeling at ease with the sharp-tongued verbal sparring and slapstick (i.e. pratfalling down the basement stairs and then hiding underneath a counter to eavesdrop). Denisof is also up to the task as Benedick and proves to be a skilled physical comedian, so much, in fact, that co-star Gregg can be noticed falling out of character to hide his laugh. It's a problem, however, when Beatrice and Benedick would be better off single. Nathan Fillion is a hoot as Dogberry, a screwball cop who could've came off as a broad buffoon; with his comic timing, the beefy actor is rather deadpan, even when he keeps reminding everyone that he's been called an "ass."

A budgetary change of pace and a total lack of crash-and-burn destruction (and wormholes, for that matter) with an emphasis on performances is nice and all, but "Much Ado About Nothing" ultimately lives up to its title. An experiment with the bones but not the dramatic urgency of an actual film, it's as airy and mirthful as it is inconsequential. There are plenty of pleasures here, though, and Whedon keeps everything light and goes for a classical style. Whether or not shooting in b&w was merely for budget constraints, Jay Hunter's cinematography looks positively dreamy. Instead of being a commercial project, this is a labor of love for Whedon, even if it ends up being a merely one-off lark. A nice try, though.