Unfunny Games: "The Purge" effective but doesn't fully explore one hell of a premise 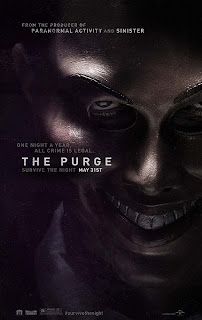 When a film has such a compelling premise, one hopes it works all the way through as a feature film because, after all, it's all in the execution. Writer-director James DeMonaco (the screenwriter of the efficient 2005 remake "Assault on Precinct 13") has a subversive, terrifying kernel of an idea for his second directing effort, "The Purge," but disembowels possibilities for further examination in what amounts to a taut, albeit pretty routine, home-invasion thriller in its execution. You see, in 2022 America, the unemployment rate is at a mere 1% and crime is at an all-time low. One annual night, sanctioned by the "New Founding Fathers," there is a 12-hour holiday called "The Purge," during which people can release their bottled-up hatred and aggression when all crime (including murder) is legal. Literally, you can get away with murder without any consequences. A barbaric, anarchic free-for-all should keep society in line for the remaining 364 days, right?

An outwardly fascinating allegory about the Haves and Have-Nots and mankind being an inherently violent species, "The Purge" narrows the widespread scope of its concept to one neighborhood and the Sandin family. The patriarch, James (Ethan Hawke), has made a successful living selling home security systems, allowing him to afford a home addition for his wife Mary (Lena Headey) and their two kids, rebellious teenage daughter Zoey (Adelaide Kane) and quirky younger son Charlie (Max Burkholder), in their elegant McMansion. At 7 p.m., in their friendly, affluent subdivision, the Sandins quickly finish up their dinner and prepare for lockdown, as metal shields barricade every door and window. They hunker down but feel protected, peering at their surveillance system of a still-quiet community.

Conflict quickly arises when Mary's forbidden, slightly older boyfriend, Henry (Tony Oller), privately shows up, seeking to have a talk with Dad. More contextual to the plot, a victimized, dog-tag-wearing Have-Not (Edwin Hodge) pleads for help outside and, to bring danger into the Sandins' fortress, compassionate Charlie selflessly lets him in. This does not bode well for the family, who had no inclination to purge this evening, when a Manson-like group of masked, machete- and gun-wielding Haves, led by a preppy Big Bad Wolf (Rhys Wakefield), demand to have the "homeless pig," or else. It's not going to be a very safe night.

Tight-fisted at an in-and-out 85 minutes, "The Purge" doesn't dawdle on all of the hows and whys behind the title commencement, but from the get-go, DeMonaco knows how to set the stage economically and lull us in. The unsettling opening credits reel through years' worth of surveillance footage, ironically setting the human-on-human savagery of the previous purges to a theatrical musical piece. Even as it tends to hit rote slasher-genre beats, like family members running off when they should be sticking together and playing hide-and-seek from their invaders, the film has some quiet moments of tension and atmosphere. Family characters grow complicit in a cheer-worthy, vengeance-rules scene set in a billiards room. There is one unsparing shock that doesn't double-back on death, but afterwards, we are treated to too many convenient rescues and extraneous characters with inscrutable motivations. The final moments, as survivors wait for 7 a.m. to come and have the purging be over with, conclude with hushed intensity and satisfaction, as well as some food for thought in regards to such moral dilemmas.

As performances go, they're solid, even if the women come out more on top. Hawke is fine but relatively one-note, and Headey is much more sympathetic when showing her moral stance on all the violence, acing a final scene. Making her major film debut, Kane is emotionally generous as Zoey, and Burkholder (NBC's "Parenthood"), whose Charlie makes some questionable choices involving his remote-controlled creepy doll robot and the stranger he helped rescue, still impresses. As the leader of the kill-happy group, Wakefield, resembling the missing link of the two seemingly polite, tennis-uniformed psychos in "Funny Games," can turn a grin into something truly chilling.

Viewers may jeer at the screen, screaming "Behind you!" at certain characters who are apparently expected to be in tip-top instinctual shape, and notice the film doffing its hat to others of its home-invasion ilk, especially 2008's much simpler and superior "The Strangers." Ultimately promising more than it delivers, "The Purge" might not consistently satisfy the seething urges of thrill-seekers or fully explore its provocative subtexts, but for a suspenser with something on its mind, it strays off the beaten path rather than merely turning a family into meat puppets. Lean, mean home-invasion movies—and there are many ("You're Next" will be released in August)—are usually always effective. This one is, too, but there's the slight frustration that its maker didn't take his cool wrinkle far enough. Oh, well; sharpen your machetes to await the next Purge.