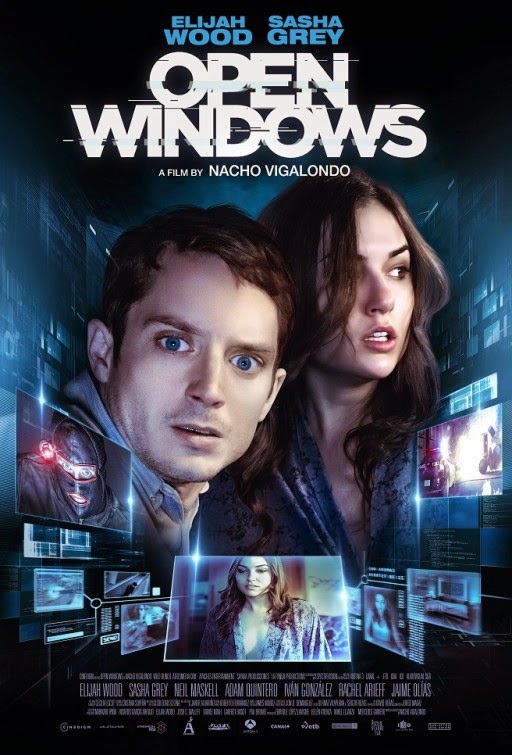 An unofficial 21st-century re-imagining of Alfred Hitchcock's "Rear Window" in terms of voyeurism and violation of one's privacy, "Timecrimes" writer-director Nacho Vigalondo's English-language debut, "Open Windows," is crazier than a shit-house rat—maybe too much for its own good. It is its own entity through sheer technical novelty and giddy inspiration, and suspension of disbelief can certainly be a useful tool for the premise to work, but it gets yanked to ridiculous lengths here. Loopy, overplotted, and absurdly preposterous, but grippingly contrived for quite a while, this cyber thriller draws the viewer in right away, similarly taking place entirely on a computer desktop like this year's Chatroulette-from-Hell thriller "The Den," with the camera taking turns multi-tasking and capturing multiple windows and then focusing on just one. There are movies that start off strong and diminish as they go along, and "Open Windows" is one that takes such a nosedive.

Watching a live press conference at Fantastic Fest from his hotel room in Austin, Texas, buttoned-up superfan and fansite creator Nick Chambers (Elijah Wood) thinks he has won a promotional contest to have dinner with schlocky sci-fi actress Jill Goddard (Sasha Grey). From an e-mail he receives, he is asked to send a video of himself, but before he's even done, Nick gets a call from a British man named Chord (Neil Maskell), who breaks the news that Jill has cancelled the dinner. Pretty soon, Chord reveals to be very knowledgable about hacking into Jill's phone, downloading hotel surveillance, having access to door locks, and possessing the talent of impersonating anybody. Chord eggs on Nick to get revenge by granting him access to Jill's phone and computer, but soon, Nick is asked to be a patsy carrying out Chord's diabolical plans.

Within ten months, this is the second time Elijah Wood has played an easily manipulated puppet at the mercy of a disembodied voice, the first being the equally loopy but far better "Grand Piano." As Nick, Wood doesn't have much to play with, except for playing a pawn growing increasingly complicit with Chord's orders, and he's quite good at conveying a jittery sense of panic, as well as a confidence in wanting to turn the tables. As for Sasha Grey—yes, the 26-year-old adult film star who has come a long way since videos such as "Oral Supremacy" and "Gang Bang 5" to films like "The Girlfriend Experience" and "Would You Rather"—she always seems to be acting in an unnatural performance as Jill, who's thinking of retiring at an early age but just comes off as a petulant brat undeserving of much concern. Sometimes, Grey sells victimized fear, and other times, she comes off stiff.

"Open Windows" leads us to believe a lot more than we probably should, given writer-director Vigalondo's energetic execution. The process with which the film has been made is a cleverly audacious doozy and looks like it had to have been quite the undertaking, and a thrilling car chase ratchets up the tension even more (mind you, we are still watching through a computer screen). It almost gets away with it all before growing nonsensical in its character motivations—Nick is so willing to go along with everything—exasperating in its plotting—a trio of French computer hackers come to Nick's aid—and just plain stupid in its "this-is-what-was-really-going-on" twists involving time-code delays and mistaken identity. Inconceivably, Vigalondo crams so much in that this wildly convoluted ride turns into the cinematic equivalent of a pop-up virus, juggling so many plates that several are bound to fall and break. Compulsively watchable before jumping right off a cliff, "Open Windows" doesn't have to live or die by its payoff, but it keeps stretching the boundaries of plausibility until no longer holding any scrutiny. Even by the standards of a logically dumb zeitgeisty entertainment mounted with an ingenious technique, it's ultimately hard to care one way or the other.