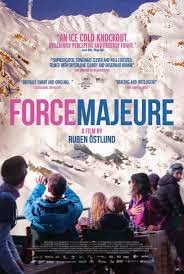 Swedish import "Force Majeure" is a subtle but entertaining polemic, finding deadpan, excruciating humor and insightful provocation of thought. Writer-director Ruben Östlund seems to try his hand at a chilly, gutting takedown of something in a tone akin to the work of Michael Haneke, but through the filmmaker's examination of gender expectations and in-the-moment reactions to perilous situations, it is a bleakly funny black comedy and a snapshot of less-than-perfect family dynamics. When the film first finds its vacationing Swedish family of skiers having their picture taken at the top of a mountain and are then shown brushing their teeth with matching electric toothbrushes in matching long johns, it clues us in that not everything is going to be certain or peachy keen by film's end. The film feels like it pulls back a bit by the end, but ultimately, "Force Majeure" upends the obvious of male and female behavior.

Tomas (Johannes Bah Kuhnke) and Ebba (Lisa Loven Kongsli) are only seemingly happy. They take their children, Vera (Clara Wettergren) and Harry (Vincent Wettergren), on a five-day ski trip to the Les Arcs resort in the French Alps. Ebba hopes Tomas will find room for family time without getting caught up in work. After their second day of downhill skiing, the family sits on a crowded patio for lunch, just as a controlled avalanche is about to pass. Tomas reassures his family that it is safe, but as the snow comes closer to the patio, Vera and Harry scream and everyone races away from the avalanche. It seems Ebba struggled to grab both children, while Tomas grabbed his phone and bolted. Luckily, the avalanche comes to a stop before reaching the patio restaurant, but when the family comes back to the table, no one says anything. For the remaining days, Ebba won't let go what Tomas' first reaction was during the avalanche and keeps needling him in front of other people; over drinks, she brings it up to a wife and mother who has come to the resort by herself and the young man (Brady Corbet) she met. Tomas perceives the situation differently and won't even own up to what he did (or didn't do), but Ebba has trouble forgiving her husband. It's going to be a long trip.

How should one react in a life-or-death situation? It's not like we are programmed to act the way we know we should. Our instinct is to go into survival mode. It's primal human nature to save our own skin, but what if one's spouse doesn't see it that way? Once Tomas' old friend, Mats (Kristofer Hivju), and younger girlfriend Fanny (Fanni Metelius) arrive at the same resort, they have dinner and then enjoy some conversation over a bottle of wine. When Ebba brings up the avalanche story, everyone is speechless, including Tomas who ends up excusing himself. Even after Ebba insists they watch the video of the incident on her husband's phone, Mats tries to play devil's advocate by rationalizing Tomas' actions and equating it to our innate instincts in an unanticipated event (hence the title). It's around this time that Ebba drives a schism between herself and her family, feeling as if she doesn't recognize Tomas anymore, and starts wanting to ski alone. This might be petty drama for a film, but tension keeps rising and droll, perceptive observations are sustained throughout.

Filmmaker Östlund keeps turning his themes in with sly humor that will make one cringe and let out a nervous giggle, from Ebba passive-aggressively brushing her teeth while giving Tomas the death stare in the bathroom mirror to Tomas crying like a baby as he proves to her that he isn't proud of his cowardly actions, both past and present. Everything becomes restored, with the possible manipulation of Ebba, and then another event, like the avalanche, on a packed bus has Ebba taking Tomas' place as the family's protector. Every performer is unaffected as if the four could be a real family, and Johannes Bah Kuhnke and Lisa Loven Kongsli speak volumes without even saying a word as Tomas and Ebba. Photographed by Fredrik Wenzel and edited by Jacob Secher Schulsinger with precision (notice how the family is blocked throughout), the film is suitably chilly with the setting of the French Alps, which looks both isolated and stunning, but also in the static stillness of the framing. Mats even encourages Tomas to scream when they're alone on a mountaintop. The only music score heard throughout the film is Vivaldi's "The Four Seasons" violin concertos, and it's a testament to the drama at hand being more powerful than anything. Like "Gone Girl," "Force Majeure" might make for a brittle, uncomfortable discussion with one's significant other afterwards.