Girl of the Night: "A Girl Walks Home Alone at Night" like a gorgeous, hypnotic dream 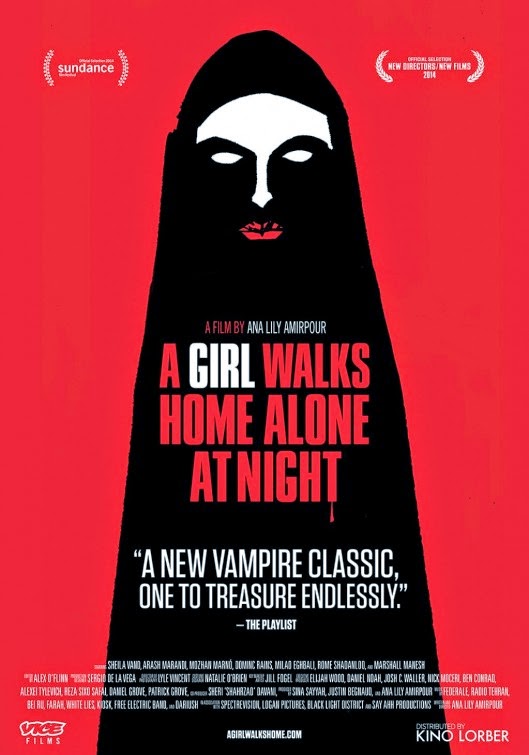 With Jim Jarmusch's groovy "Only Lovers Left Alive" proof positive that vampire films are actually very much alive and well this year, "A Girl Walks Home Alone at Night" is more in a class of its own as a tantalizing chiaroscuro-styled tableaux that casts a haunting spell. Born in England and raised in America by her Iranian parents, writer-director Ana Lily Amirpour makes her feature debut, mixing and matching but not beholden to the mood, rhythm and style by the master likes of David Lynch, Jim Jarmusch and Quentin Tarantino, all of who are not bad company in which to be. Unprecedented as an "Iranian vampire western," the film is surely about mortality and gender politics, but it really feels like a melting pot of visual poetry that envelops and washes over the viewer like a victim succumbing to a bloodsucker's seduction. It feels like a modern classic that can't be tied down to one genre.

The story of "A Girl Walks Home Alone at Night" can be summed up in a couple of sentences, but it could also operate as a silent picture, telling the viewer everything he or she needs to know through imagery. In the hellish Iranian oil-refinery town of Bad City, Arash (Arash Marandi) takes in his drug-addict father, Hossein (Marshall Manesh). When Arash's most prized possession—a 1957 Thunderbird—gets taken from him by deplorable pimp-cum-drug dealer Saeed (Dominic Rains), who has "SEX" tattooed on his neck, for Hossein's debts, Saeed soon encounters The Girl (Sheila Vand) when he pushes a hooker (Mozhan Marnò) out of the stolen T-Bird. Prowling at night, The Girl, dressed in her hijab, seems to have a thirst for bad-seed blood and takes care of the scumbag. On Halloween night, the dressed-as-Dracula Arash runs into the female predator and they may just be right for one another.

Startling as a female-driven horror film, joyous and sensual as a love story, and intoxicatingly hypnotic as a piece of art, "A Girl Walks Home Alone at Night" frightens, moves, and dazzles, ensuring the feeling of nirvana for cinephiles. Gorgeously photographed by Lyle Vincent in black and white with striking, painterly compositions, the imagery is artful and provocative, namely every shot of the titular girl dressed in her black hijab and mime-colored shirt drifting down a sidewalk; the pacing dreamy and hypnagogic; and the plotting is simple but craftily cyclical. There's a funny, creepy and beautiful scene, recalling the Marx Brothers' mirror gag, where The Girl mirrors every move that of Hossein from across the street. That same balanced tone is met in another on-the-street moment that has Arash, dressed as Dracula and lost in a neighborhood after leaving a Halloween party, running into The Girl who comes by on a skateboard she stole from a young boy. The film really works its magic during a euphoric moment, quiet and only set to the diegetic use of White Lies' "Death," where The Girl puts on a vinyl record in her music poster-covered bedroom with Arash. Barely anything happens, as Amirpour holds a shot on the space, and yet it is such an indelible moment of an unspoken attraction between a mortal and immortal. Following that standout sequence, there is also a surreal, lyrical bit with a drag queen dancing around with a balloon.

A film so simultaneously exciting and languid, so full of life and yet standing still, Ana Lily Amirpour's "A Girl Walks Home Alone at Night" sprays fresh blood on a canvas and works on the level of a fantastical dream. Set in Iran and spoken in Farsi with English subtitles but shot in Taft, California, the film has a timeless feel that feels specific and yet feels like it could take place anytime. Almost like a monochrome, less-stylized noir-ish version of Frank Miller's Sin City by way of a spaghetti western, "Bad City" is a hellhole of a place, and yet the fanged girl might be making it better. Keeping his first name for the character he plays, Arash Marandi has a magnetic presence that reminds one of a James Dean type. As Arash, the actor conveys a decent type who's respectful, rebuffing the advances of a young woman he landscapes for, but he's also a lonely, vulnerable soul. Sheila Vand has an ethereal quality, perfect for the part of a vampire roaming the streets of Bad City. She applies punkish eyeliner before dancing alone in her bedroom, but then she can quickly make a switch to stalking unsavory men whom she believes deserve to be gone. Her exact motives are neither here nor there, but she spares an abused prostitute and a misbehaving child who deserves a good scare; in a way, she's doing good. The film also co-stars a heroic cat, Masuka, that makes its way from owner to owner. As any piece of art, "A Girl Walks Home Alone at Night" doesn't always make traditional sense, and if it did, it wouldn't feel as special.