The Female Frontier: "The Homesman" a bleak but mostly rewarding journey 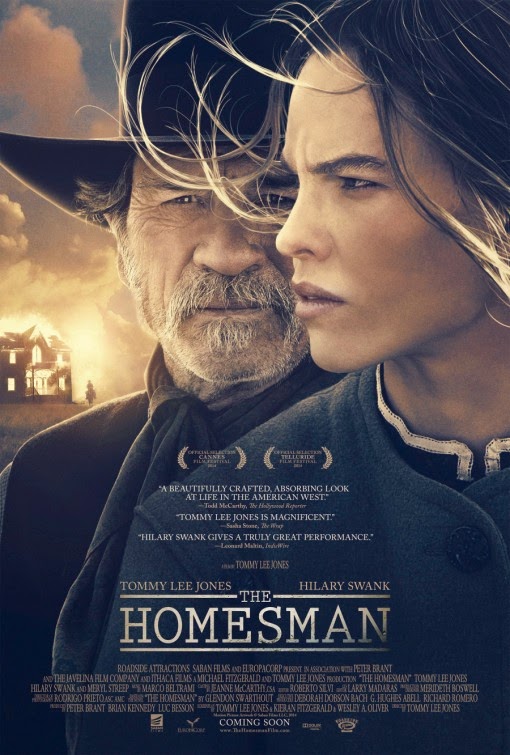 The Western has surely faded, so any 21st-century variation plowing that old territory and still managing to engross a viewer with a story he or she wouldn't think to be interested in has performed a little miracle. A languorous but sturdy oater, "The Homesman" is Tommy Lee Jones' second feature, following 2006's "The Three Burials of Melquaides Estrada," in which he directs and stars (and this time co-adapts). Co-written by Jones & Kieran Fitzgerald & Wesley A. Oliver, this sparely told adaptation of Glendon Swarthout's novel dares to rattle the viewer's expectations two-thirds of the way, almost to the degree that it seems unsure of whose story it wants to tell or what it wants to do with its feminist leanings. And yet, even so, the harrowing lack of compromise and the strong performances make the long, difficult and dangerous journey a rewarding one, too.

In the Nebraska Territory circa the 1850s, it's not only hard being a human being in the tough living conditions, but it's hard being a woman. Pioneer woman Mary Bee Cuddy (Hilary Swank) lives uncommonly alone as a 31-year-old spinster, hoping for marriage from a man for whom she cooks and plays music, but he rejects her for being "plain" and "bossy." She's so no-nonsense and capably self-sufficient that the local minister (John Lithgow) draws her from his parish when two men refuse to take three women (Grace Gummer, Miranda Otto, Sonja Richter), who have lost their minds, across the river to Iowa. When Cuddy sets off in her two-horse wagon, she happens upon George Briggs (Tommy Lee Jones), a crusty claim jumper whom she saves from being hanged. In agreeing to save his life, Briggs must follow her orders and accompany her on the journey. Cuddy and Briggs will not only have to brave the disturbed women, but all of the dangers that come with the harsh plains.

If two-time Academy Award winner Hilary Swank could devastatingly disappear into the skin of a woman with a sexual identity crisis in 1999's "Boys Don't Cry" and a damaged but determined pro boxer in 2004's "Million Dollar Baby," her choosiness of projects pays off with her work as an intrepid spinster in a sunbonnet. As the pious Mary Bee Cuddy, Swank has the gravitas to not only convey the character's tough know-how and selflessness but a deep sadness. On screen, Tommy Lee Jones can play an irascible rascal in his sleep, and it's not always easy to get a handle on George Briggs, but he manages to color the character with an irreverence and empathy once Cuddy makes an imprint on him. As the three madwomen, Grace Gummer, Miranda Otto, and Sonja Richter are collectively asked to go to a dark headspace of mental illness and stay there, whether it's staring blankly while being tied to a wagon, clinging to a ragdoll, or acting so hysterically feral to be in much need of an exorcism. Winter-set flashbacks of these women are startlingly disturbing—Arabella (Gummer) lost her three children to diphtheria, Theoline (Otto) threw her baby down the toilet of an outhouse, and Gro (Richter) was raped by her own husband and began harming herself after her mother's death—but after those earlier scenes, they only add up to one insane woman on the road.

From a production standpoint, one musn't take Merideth Boswell's production design, Lahly Poore's costume design, Wendy Ozols-Barnes' set decoration, and Guy Barnes' art direction for granted. Everything is created for the period with unerring authenticity and detail. Rodrigo Prieto's cinematography is also evocative and starkly beautiful, allowing us to view the flat, vast vistas as far as the eye can see. Also standing out in the cast, if only in brief supporting roles, are James Spader, as a swanky hotelier who regrets to accomodate Briggs and his cargo; Meryl Streep, as the Iowa pastor's wife who hopes to care for the three women; and Hailee Steinfeld who's at home in her "True Grit" apparel as a hard-working Iowa teen. Before a wonky, musically folksy final scene that elicits more of a "huh?" than an emotional slam, "The Homesman" solidifies itself as a tragic, emotionally wrought piece of melancholy as bleak and harshly unforgiving as the Old West must have been.