Into the Woods: Unscary "Forest" delivers more tedium than horror 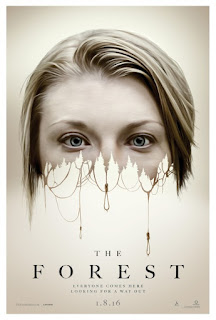 Generally speaking, January is a month of mediocrity that usually commences with a horror movie. A sleepy PG-13 horror effort like "The Forest" at least looks auspiciously creepy in conception, Japan's Aokigahara Forest at the base of Mount Fuiji—a real place where people get lost in to commit suicide—being prime real estate for the genre. It's unfortunate, then, that the payoff is far inferior to the setup, perhaps as a result of debuting director Jason Zada (a marketeer who developed viral holiday card campaign "Elf Yourself") being too untested of a filmmaker. "The Forest" is not inept, but it's not a very scary place to visit.

Sara Price (Natalie Dormer) just has a feeling something is wrong when she doesn't hear from her twin sister Jess (Dormer), a teacher in Japan. When she learns that Jess was last seen going into the Aokigahara Forest, known as the spot where people go to commit suicide, Sara immediately travels to Tokyo, as intuition tells her that her sister is still alive. Accompanying her into the forest is flirtatious American travel writer Aiden (Taylor Kinney), who's intrigued to write her story, and a guide named Michi (Yukiyoshi Ozawa), who knows the forest and warns them never to leave the path. The three of them end up finding Jess' tent, and against Michi's advice, Sara and Aiden decide to stay the night in case Jess comes back. Instead, Sara starts seeing things that aren't there, including a sad past that is about to catch up with her.

Making a horror film about the Aokigahara Forest could have come off insensitive or exploitative. It does not, and even if it did, that would be the least of the film's problems. "The Forest" has deeper intentions to be a horror film about something else but never quite commits to them. It's an ineffective attempt at being psychological, and even on a primal level, it's pretty unscary. The specificity of Japan's "Suicide Forest" is undermined by director Jason Zada's desperate over-reliance on dream sequences and false-alarm scares (which begin as soon as Sara lands in Tokyo). Ghost faces and ghostly whisperings can only go so far. An overly literal script by Nick Antosca, Sarah Cornwell and Ben Ketai probably doesn't do anyone any favors, either; when you see three names attached to a script, it's usually a red flag.

In her first lead performance as Sara Price (and the dual role of Jess), Natalie Dormer (TV's "Game of Thrones") is capable, showing investment and adding a little nuance to a character too thin on the page. Though Jess went to Japan to be a teacher, she is considered to be the wayward (and brunette) sister who always cries for help. So besides having a husband, Rob (Eoin Macken), back in America, what does Sara do? If she has a job, it's never clear. There's very little characterization in Sara to care enough about her plight, and the sisterly dynamic isn't allotted enough screen time to help the cause. Taylor Kinney (TV's "Chicago Fire") is fine, never overdoing the enigmatic nature of Aiden who may or may not be trusted.

Beyond the setup of the premise, "The Forest" never delivers the tension, dread, atmosphere, or frights expected in a film about depression and repressed childhood trauma, just wasted potential and tedium. Sequences where Sara is spooked in the middle of the night by something outside of her sister's tent and then later gets lost in a hole in the ground with a Japanese schoolgirl are as creepy as it gets, but Sara's hallucinations in the forest should be more disorienting than they are. The traumatic root of Sara and Jess' differences as twin sisters is relived through a View-Master toy, the film's one unsettling trick that ends up being used for a cheap jump scare anyway. The narrative outcome is a bit unanticipated in how black-hearted it dares to be, but how it gets there is muddled, rushed, and unconvincing. The final-framed jolt is also schlocky as ever. As a theatrical film, it's competent. As a theatrical horror film, it's terribly lackluster.