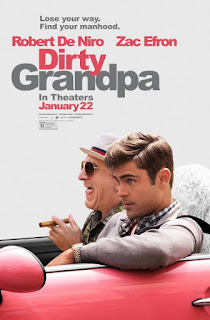 Surely the blueprint for “Dirty Grandpa” must have sounded like uninhibited fun for a hard-R road comedy. For better or for worse—all right, definitely worse—this is a raunchy, unprecedented opportunity for 72-year-old Robert De Niro to play a perverted lout of a widower making it his goal to have sex with a college girl and revel in general inappropriateness. Hopefully the paycheck was worth it. The theoretic pairing of De Niro and Zac Efron is actually pretty inspired, but it’s too bad these two and everyone else in the capable cast had to sink to the icky, mean-spirited levels of John Phillips’ first feature script. Directed with the relentless determination to be as shocking and outrageously vulgar as ever by Dan Mazer (2013’s overlooked pleasant surprise “I Give It a Year”), “Dirty Grandpa” resorts to being smarmy, smutty and stupid. Let us just pretend this never happened.

Preppy, uptight Atlanta corporate lawyer Jason Kelly (Zac Efron) wanted to be a photographer, but he settled to work for his father’s law firm and to be engaged to the henpecking Meredith (Julianne Hough). After his grandmother’s funeral and only a week before Jason’s wedding rehearsal brunch, Jason’s estranged ex-Green Beret grandfather Dick (Robert De Niro) asks him to drive them to his summer home in Boca Raton, Florida. It’s apparently what Dick’s wife would have wanted. When grandfather and grandson make a pit stop at a diner, they run into Jason’s nice former classmate Shadia (Zoey Deutch), aggressively lusty Lenore (Aubrey Plaza), and their gay black friend Bradley (Jeffrey Bowyer-Chapman). Shadia invites the unlikely duo to Daytona Beach for spring break festivities and Lenore has a freaky fetish for older men. Of course, Jason gets close to Shadia but fails to mention he’s getting married and the sex-starved Dick poses as a professor because he wants to get down with the easy Lenore. Oh, the wacky hilarity that ensues.

When he’s not taking his clothes off, dancing almost nude to the Macarena after smoking crack, or competing in a flex-off with his grandpa, Zac Efron gets fewer chances to be funny as the straight man than he did with his standout frat-boy turn in “Neighbors.” Dressed as a Ken doll, the buff pretty-boy actor is left adrift to be the butt of jokes, which seem more like hazing. 1) He gets told he looks like a lesbian more than twice and 2) De Niro repeatedly sticks his thumb up Efron’s butt, and 3) at one point when sharing a bed with his naked older co-star, Efron gets a penis in his face. And that is to say nothing about the laborious visual gag where Jason wakes up naked on a beach with an inked swastika made of penises on his face and a stuffed bumblebee covering his groin, while taking a FaceTime call from his fiancée, his parents, his cousin and the officiating rabbi. If that setup weren’t annoying and appallingly unfunny enough, a little boy on the beach sneaks up on Jason and starts grabbing the bumblebee, a sight that looks like pedophilia to the boy’s father from afar. Har, har. 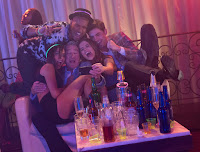 As hippie photographer Shadia, Zoey Deutch (2014's "Vampire Academy") has the natural talent and charisma to be the real deal, just like real-life mama Lea Thompson. She is the only likable person in sight and comes the closest to being an actual character, but Deutch can only be game with a script this lousy. Giving her grossly one-note role more commitment than it's worth, a scene-stealing Aubrey Plaza gets to be wildly foul-mouthed as Lenore, a slutty co-ed who wants to complete her trifecta of sleeping with a freshman, an alumnus, and now a professor. Before Lenore and Dick even consummate—“I want you to tear open my bra like it’s a social security check” is admittedly a hoot of a line—one just begins to feel humiliated for Plaza who probably doesn’t care that she has to act like a fool to get laughs. Also, aside from Plaza, the few laughs that there are can be attributed to Adam Pally (so lovable on TV’s “Happy Endings”), as Jason’s inappropriate cousin Nick, and Mo Collins and Henry Zebrowski as a pair of cops who always bend the law for Daytona's surf-shop owner/drug dealer/emcee Pam (Jason Mantzoukas). Nobody else emerges unscathed, including Julianne Hough, who gets to be the shrill, whiny, type-A bridezilla in a totally thankless cliché of a role, and Dermot Mulroney, as Jason’s lawyer father, who gets to have cocks drawn on his face.

Pandering, groan-worthy, and an insult against immature humor, “Dirty Grandpa” hasn’t a lick of wit, edge, or charm when a bluntly crass barrage of sex jokes will apparently do. Whereas a deft brand of R-rated comedy is able to smooth out the crudeness with a sweetness and get away with it, this junk takes a 180 that feels like a disingenuous sell-out. As hypocritical as the racist, homophobic Grandpa Dick, the film suddenly pretends to be a heart-filled, lesson-teaching story about reliving one’s youth and following your genuine passion at its core. Perhaps "Dirty Grandpa" does what it sets out to do by making one feel dirty; if so, congratulations. It’s only January and this is already one of the most off-putting motion pictures of the year.