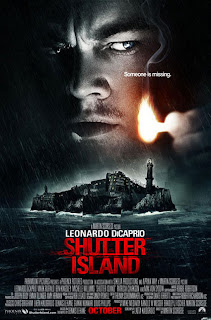 Adapted from another novel by Dennis Lehane ("Mystic River," "Gone Baby Gone"), Marty Scorsese's "Shutter Island" is like an overripe Hollywood noir from the '50s. It's 1954, and Edward “Teddy” Daniels (Leonardo DiCaprio, with a Bostonian accent), a widowed U.S. mahshall and his pahtner, Chuck (Mark Ruffalo), take a ferry to Shutter Island, a rocky fortress off the coast of New England that houses Ashecliffe Hospital for the Criminally Insane. Alcatraz, eat your heart out: this forbidding place holds over 66 violent psychopaths as its patients. The two pahtners are investigating the disapperance of a patient, murderess Rachel Solando (Emily Mortimer), in there for drowning her children, who has somehow escaped her locked cell. Teddy has a lot of baggage, haunted by his dead wife who was killed by one of the inmates and when he liberated a Dachau concentration camp as a WWII soldier. Realizing the investigation points to a 67th patient, this leads to Teddy and Chuck going to Ward C, as a hurricane hits the island, where supposed government experiments with psychotropic drugs are being conducted on the inmates. So are the doctors brainwashing their patients "Titicut Follies" style? Or is nothing what it seems?

With material this pulpy and Gothic, Scorsese puts us through the fevered psychosis of an obsessive mind, with dreams, flashbacks, and hallucinations that slow down the propulsion that's needed in a mystery-thriller. From the opening frame, we feel a mood of doom, in overcast tandem with atmosphere and that portentous, bombastic "Jaws"-like score from composers John Cage and John Adams.

Scorsese calls upon his go-to protege for four projects, Leonardo DiCaprio, who turns in an urgent and complex performance. There are fine bit parts by Mortimer, John Carroll Lynch, Michelle Williams, Patricia Clarkson, Ben Kingsley, Max von Sydow, Jackie Earle Haley, Ted Levine, and Elias Koteas. Williams appears in flashbacks and hallucinations as Teddy's late wife, and she brings a poignant vulnerability. But screenwriter Laeta Kalogridis and Scorsese may've found a better use for these actors without just using them as voice boxes for exposition. The film unfolds with darkly haunting, disturbing layers like pieces of a puzzle picture, and the insanely rug-pulling Big Reveal hangs together, but it's frustratingly derivative and not really a Big Deal. Skillfully made and mostly gripping, "Shutter Island" proves Scorsese is still that professional filmmaker.