Bland "New in Town" as fresh as Limburger cheese 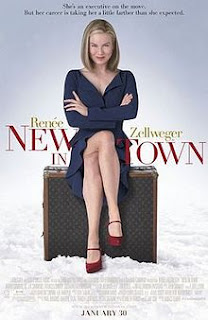 Scrunchy-faced Renée Zellweger's character in "New in Town" may be new in town, but this material is as old as the first tapioca recipe, smelling as fresh as Limburger cheese. Lucy Hill is a single, corporate-climbing executive for a dairy company from Miami who volunteers to travel to one of their factories in small-town New Ulm, Minnesota and cut employment by fifty percent. Of course, she doesn't make the best first impressions, especially with local union rep Ted (Harry Connick Jr.) who likes beer and drives a pick-up truck. Will Lucy warm up to the New Ulm residents and not be able to take away the livelihoods of such hardworking people? And will she fall for Ted? Yah, you betcha!

This terminally bland fish-out-of-water rom-com is graph-plotted like "The Pajama Game," using every Hollywood movie cliché, including stereotypically good-hearted but dim Minnesotan caricatures straight out of "Fargo," right down to the Gunderson last name (where's Marge when you need her?).

Lucy is apparently an idiot because she traveled to Minnesota in the dead of winter, wearing a skirt and high heels, and no winter coat—in fact, she tries hiding her hard nipples. Oh, and she doesn't know how to make a fire without a remote. Seriously? And all of the northern male residents love ice fishing, all the women spend their waking lives making tapioca, and if neither hobby is your hobby, you're a fish-out-of-water.

Comfortably pleasant as a vehicle for Zellweger, but director Jonas Elmer oh-so-desperately (ice) fishes for charm and sets up every gag so laboriously. For example, on a hunting trip, Lucy can't seem to unzip her hunting suit to pee, so when Ted finally gets it open for her, she accidentally shoots him in the rear with a rifle. The huggable actress does the most with the least, a lame and pedestrian script by newcomer Ken Race and "Sweet Home Alabama" scribe C. Jay Cox. Connick and Zellweger's romance lacks any fire or complication, and their “spicy” comic banter falls flat as a pancake. The rest of the cast is severely wasted, with Siobhan Fallon Hogan, as Lucy's aw-shucks secretary Blanche; J.K. Simmons, as the beer-bellied factory manager; and Frances Conroy, as another friendly towny.

For a contemporary romantic comedy, "New in Town" sure feels as old as they come, don'tcha know?!