"Unknown" has enough speed and style to enjoy the ride 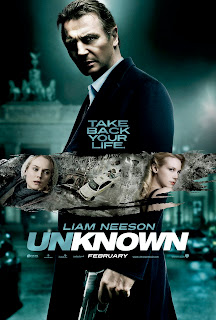 From Joel Silver's Dark Castle company, although not a horror movie as usual, "Unknown" is a sleek, entertaining thriller, though it sounds more surprising than it plays. Liam Neeson stars again after his late-blooming introduction as a badass action star in 2008's January surprise "Taken." He is botanist Dr. Martin Harris who arrives in Berlin with his wife, Liz (January Jones), for a biotech conference. But as soon as they arrive to their ritzy hotel, he realizes he's left his briefcase—with his passport—at the airport. So he hops into a taxi to go retrieve it, but a crash sends the car off the bridge into a river and causes him to go into a coma for four days. When he comes out of it, Liz has no idea who he is and she's married to the “real” Martin Harris (an appropriately shady Aidan Quinn). Without any identification, it's up to Martin to persuade a cabdriver (Diane Kruger), who rescued him in the accident, to help him find out the truth to why he's unknown.

"Unknown" is a stylishly crafted ride by director Jaume Collet-Serra (2009's "Orphan"), with a classy look and the chilly lensing of Berlin adding to the menacing mystery. Screenwriters Oliver Butcher and Stephen Cornwell, adapting from a French novel "Out of My Head," keep us guessing every step of the way and string us along as nothing is what it seems and nobody is who they say they are, until the twist comes out in a straight dialogue. It's pretty derivative of ideas from "Frantic," "The Long Kiss Goodnight," and "The Bourne Identity," and minus some undefined motivation on the missus' part, most of the plot mechanics hold up where they should.

Plot nitpicks aside, Collet-Serra paces it briskly to keep us engrossed and throws in a few car chases, one in a parking garage that's an exciting doozy. Even the setup's car accident is tense and well-directed, and finally, here's an action movie that doesn't slice and dice the editing! Playing a cipher since the role demands it, Neeson is good in this action role with the right amount of gravitas and ass-kicking skills. Jones is effective as the icy Hitchcockian blonde, and Kruger might be the hottest Bosian cab driver. Also, the supporting actors hold their own, Bruno Ganz as an ex-Stasi agent and Frank Langella, dirty from the start, as Harris's botany colleague. These two veterans share an intense conversation together. Forget about preposterousness, and as long as you don't care about its “unknown” plot secrets, "Unknown" will never bore or cheat you much.