Despite precious title, "happythankyoumoreplease" is an earnest pleaser 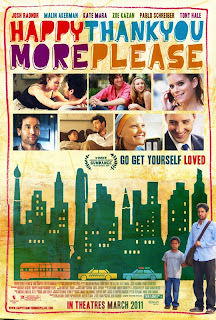 On the outside, "Happythankyoumoreplease" looks like another indie so pleased with its own self-conscious hipness. Like that preciously quirky, no-spaced title for starters. But on the inside, this multi-character seriocomedy is surprisingly down-to-earth and earnestly made. Josh Radnor (from TV's How I Met Your Mother) pulls a Woody Allen triple duty, writing, directing, and starring in his debut, a roundelay of young New Yorkers dealing with relationships, career moves, and other foibles in a happy Manhattan. There's even passing mention of the man that makes a movie once a year when he should take time off to spend with his wife/daughter.

Radnor leads the way as Sam, a struggling “voice of our generation” writer who's late to an important publishing meeting (with Richard Jenkins) when he sees a young black foster-care boy stranded on the subway and it becomes his problem. As he fails to turn the boy over to the authorities, he “adopts” him to woo a pretty waitress/cabaret singer named Mississppi (Kate Mara), whom is asked on the same day of meeting to move into his apartment for three days. Without hair and eyebrows and her head wrapped in colorful, Barbados-style scarves, Malin Akerman plays Sam's best friend, Annie, a self-defeating alopecia-sufferer who always falls for scummy “29-year-old 12-year-olds.” Might she fall for her cheesy-creepy co-worker named Sam #2 (Tony Hale)? Another couple is Sam's cousin, Mary Catherine (Zoe Kazan), and her boyfriend Charlie (Pablo Schreiber), who has a business deal brewing in L.A., while she wants to stay on the East Coast.

Now, with all these characters, the film flows pretty well between each story, even if the parts are more compelling than the whole and they all tie up pretty smoothly (and simultaneously) at the end with truisms. These people are so gosh-darn likable and actually talk, sometimes about philosophy, and all of them are worthy of loving and happiness. "Happythankyoumoreplease," that convoluted title coming from one of Annie's conversations with an Indian cab driver, is actually less self-indulgent and more naturalistic, especially from the nice work of its cast. Akerman gives her best performance to date; Mara has a natural charm behind her beauty; Kazan is a quick, smart motor for Radnor's dialogue; but Schreiber (a hunkier Joel Moore) is a bit flat and mawkish. Radnor is a huge fan of close-ups during conversational scenes, but his DV cinematography is polished and the soundtrack is a soothing mixtape of hipster songs by Jaymay. So, thank you Radnor, this is a fine first effort. More please.