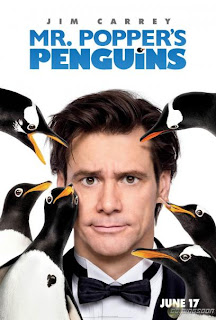 
If you were patiently waiting for a faithful adaptation of Richard and Florence Atwater's 1938 children's book about the poor house painter and his penguins, you're going to march your unhappy feet away from "Mr. Popper's Penguins" in defiance. But if you go in expecting a Jim "Liar Liar" Carrey vehicle with penguins, it's a patly predictable, pleasantly pleasing piffle. 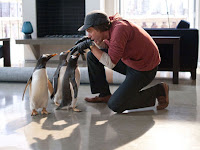 In Dad mode, Carrey mugs, dances, does a slo-mo trick and a Jimmy Stewart impersonation, and runs afoul of tuxedoed fowls as Tommy Popper. As a boy, he grew up knowing his globe-trotting explorer father mostly by the sound of his voice on his CB radio rather than physical visits. Now, Mr. Popper is a big-time real estate developer who's an absentee father himself. He's divorced from his wife, Amanda (Carla Gugino), of fifteen years, spends alternate weekends with his children (Madeline Carroll, Maxwell Perry Cotton), and his main priority is closing a deal to buy Central Park's Tavern on the Green from the choosy owner, Mrs. Van Gundy (Angela Lansbury). Shortly after the death of his father, Tommy receives a wooden crate from Dad's will and testament at the front door of his sleek, modern Manhattan apartment. Inside is a live penguin, and the next day, five more show up. The kids can't get enough of them, but will Tommy keep the flightless birds to vie for his family's attention and learn the error of his ways? Tommy's digs gets transformed into an arctic Winter Wonderland, but will he realize that a spic-and-span apartment is no natural habitat for the penguins?

The "Pet Detective" is not in top form, but he gets to strut his silly stuff and is never upstaged by the real/animated gentoo penguins. No personalities go beyond the little guys' names (sounding like those of the "101 Dalmations" or the Seven Dwarfs) of Captain, Loudy, Bitey, Stinky, Lovey, and Nimrod, but who cares, because they (refreshingly) do not talk and are adorable. Clark Gregg is cast as a zookeeper, obviously stuck in the bad-guy role, but Lansbury still hasn't lost her poise as Van Gundy. Ophelia Lovibond is an absolute delight as Popper's assistant Pippi, who has a particularly perky penchant for alliterations pertaining to the letter "P."

Director Mark Waters (who has made some very smart comedies like "The House of Yes," the "Freaky Friday" remake, and "Mean Girls") has a light enough touch that he manages to make a scene set at a Guggenheim museum gala, disrupted by the penguins, feel like a classic screwball comedy rather than an obnoxious headache. There are two unexpectedly inspired gags, one where we see the shadow of Captain swimming and rising to the top of Popper's flooded bathroom through the translucent window of the closed (and apparently airtight) door, and the second involving a phone in a blender. Relying on penguin-poop humor a bit too much, courtesy of Stinky, "Mr. Popper's Penguins" is still palatable family fare. Plot points are checked off as plain as the nose on your face, but you'll get what you came for with Carrey and his waddling, non-talking, mostly non-CG pals. 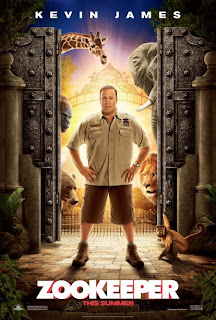 Lions, tigers, and bears, oh my, "Zookeeper" isn't just shy of the disaster that was last year's "Furry Vengeance." It's surprisingly tolerable without being very good, so panning it is like running over an innocent kitten.

The pitch for the movie probably went something like this: "Let's get that affably likable teddy bear of a man that is Kevin James and cast him as a bumbling zookeeper! The public believed him being married to hot mama Leah Remini in that sitcom 'King of Queens,' so let's have him fall in love with  . . . Rosario Dawson! She's lovely! Alright, so far so good. James was hilarious in "Hitch" so maybe we can work in another gimmick of the big guy getting girl advice from someone. Ah-hah, love-doctoring animals! They should talk too since there hasn't been a palatable talking-animal movie since 'Dr. Dolittle 2.' We can make Kevin fall down a lot like when he did his own slapstick in 'Paul Blart: Mall Cop.' Oh, and before we forget, Hollywood just passed that law where we must sign Ken Jeong onto at least four movies a year so he can do his gratingly creepy shtick until he tires from the industry and goes back to being a physician. Kids are going to love it!"

After Griffin Keyes (James) proposes to his girlfriend Stephanie (shrilly played by Leslie Bibb) on horseback, complete with fireworks and a Mariachi band, she turns into a pushy, conceited shrew and turns him down, all because his professional title is a zookeeper at a Boston zoo. If he listens to his animal friends, Griffin will become an alpha male and learn how to mate. But right there in plain view, the sweet-natured zoo vet Kate (Dawson) actually likes him for him. Hopefully he can gain an I.Q. to realize it before she gets on a plane to Africa! Did it really take five screenwriters ("Paul Blart" scribe Nick Bakay and star James included) to think up all this?

"Zookeeper" exists on Planet Monkey: the animals talk just because and give Griffin terrible advice that he should know better. Dawson has a genuine sweetness as the obligatory love interest and an entire roster of comic talent brings vocal life to the gorillas, monkeys, lions, elephants, bears, giraffes, and other cuddlies (Nick Nolte, Adam Sandler, Sylvester Stallone, Cher, Judd Apatow, Jon Favreau, and Maya Rudolph, just to name a few). One bizarre scene has Griffin taking Bernie the Gorilla (voiced by Nolte) to T.G.I. Friday's and on the way there they jam out to Flo Rida's "Low," followed by the big ape dancing with a girl that thinks he's a man in a costume. Aimed squarely at easily pleased kids, "Zookeeper" is a juvenile, formulaic, good-natured romantic farce that commendably has no fart or poop jokes (does pee count?), but director Frank Coraci (Adam Sandler's other go-to guy at Happy Madison) wastes James as a human punching bag, running into objects and falling down. One thing is for sure: it looks like it hurts.