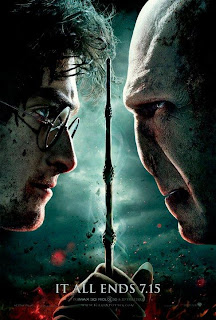 Oh, how far we've come from 2001's Christopher Columbus-directed "Harry Potter and the Sorcerer's Stone." Ten years and eight movies ago, the decade of Potter Mania is over.

When the film begins, we're already well into the middle of this seventh (or eighth, depending on how you look at it) and last film. Harry (Daniel Radcliffe) and his best-and-forever chums, Hermione (Emma Watson) and Ron (Rupert Grint), have to get that last Horcrux to weaken and finally defeat hissing, noseless Lord You-Know-Who (Ralph Fiennes, frightening as ever). One of them happens to be locked in Bellatrix Lestrange's bank vault. Also, Hogwarts is under siege by Voldemort and his dark gang, and there's the inevitable battle between Harry and Tom Riddle.

For the record, "Harry Potter and the Deathly Hallows: Part 2" is the shortest Potter (at two hours and ten minutes), never making the incident-filled narrative feel bloated. A lot of applause-worthy moments happen: Mrs. Weasley getting all Ellen Ripley on Bellatrix Lestrange! Professor McGonagall showing off her wand skills! Stone-cold Severus Snape shedding tears! Director David Yates, who has made the last four of the eight films, and screenwriter Steve Kloves, who has written all but one of the scripts, have satisfied the devoted and casual Potterphiles by handling the dense plotting and mythology with a developed momentum and cohesion. They do the same here and successfully bring it to a close. We get a moving Catch-Me-Up Flashback Sequence, shedding sad and surprising layers on certain characters, that should get you choked up, however, that does not mean it's a self-contained film.

Yates does a better job with the quiet, moody scenes rather than the big flashy ones. But the trio's escape from Bellatrix's vault on the back of a fire-breathing dragon (after Hermione transforms into Bellatrix herself to pull the wool over a court of goblins' eyes) is surely exciting and one of the more memorable set pieces in the film. And of course, there's the showdown at Hogwarts, which is so intensely staged, propulsively paced, and worth the wait. Cinematographer Eduardo Serra, who lensed the first part, creates a vividly gritty but gorgeous tapestry, and Alexandre Desplat's music score fittingly suits the sense of adventure during action scenes without being intrusive and beautifully captures some John Williams' original magical cues.

Love has finally bloomed between Harry and Ginny, as well as for Hermione and Ron; heroism springs out of characters you wouldn't expect; and there's a who's-who of old faculty and students that we haven't seen in a while (it's good to see you Maggie Smith). A "19 years later" epilogue will make one smile and giggle with a sense of nostalgia when it comes to London's Platform Nine and Three-Quarters.

There's something comforting, devastating, and bittersweet about The End that the cast and crew deserve a curtain call for creating such a perfect capper. 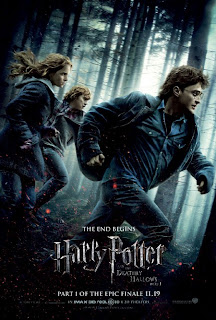 The Boy Who Lived is now a facial-stubbled man in the seventh, penultimate chapter, "Harry Potter and the Deathly Hallows: Part 1," splitting 759 pages of source material in half because Warner Bros. Pictures can do what they want. (Part 2 bursts into theaters come July 2011 for all you wizard-heads, but you probably already knew that.)

Lost are the potion classes at Hogwarts and Quidditch, but these wizards are showing maturity, as are the films, and the end is near. It's the beginning of the end actually, "The Deathly Hallows" picking up where "The Half-Blood Prince" ended, with Albus Dumbledore dead (tear).

Now, Harry Potter, Hermione Granger, and Ron Weasley are truly on their own and unprotected (Hermione erases herself from her Muggle parents' lives and memory), on their mission to find and destroy the Horcruxes, shreds of Lord Voldemort's soul that give him the power of immortality. We've known these besties since they were kids, played through Daniel Radcliffe, Emma Watson, and Rupert Grint, who have all grown into their own and have brought flesh-and-blood to their wizardly counterparts.

Helming his third "Potter" movie, David Yates has perfected the visual storytelling, sprawling narratives, and dangerously dark tone of J.K. Rowling's tale. He has a real sense of how to create dread and atmosphere in many of the film's thrilling, often scary set pieces, matching the film's grey, apocalyptic look. The second scene at Voldemort's dinner table, surrounded by his Death Eaters, is truly chilling, as is a sequence involving the serpent. 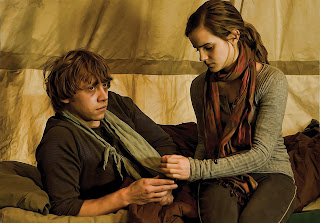 Mind you, the film has its light moments as well: our heroes' shapeshifting attempt to infiltrate the Ministry of Magic (by first flushing themselves down a loo) is a playful lot of fun. On the tender side is a scene (not in the book by the way) with Harry leading a sad, troubled Hermione in a dance after Ron storms off after a fight with her. A neat touch is the campfire-tale style that the deathly hallows story is told, beautifully visualized by way of shadow-puppet animation.

Not that it can be helped, as the producers made it into a double-bill, "Harry Potter and the Deathly Hallows: Part 1" is an anticlimax. But as the weightiest and most vivid of the films, it's also a gripping setup for the scheduled final confrontation between Harry and Voldemort.