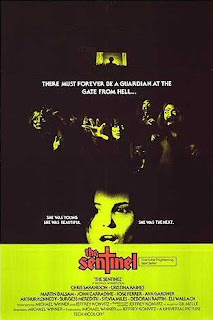 Not quite ready to tie the knot yet with her two-year boyfriend Michael (Chris Sarandon), supermodel Alison Parker (Cristina Raines) finds her own brownstone apartment in Brooklyn Heights. Once all moved in, she meets one of her friendly old neighbors, Charles Chazen (Burgess Meredith), and a strange, extremely open lesbian couple (Sylvia Miles, Beverly D'Angelo). During photo shoots, Alison begins experiencing regular fainting spells and waking up to loud noises at night. When she brings her problems to the attention of enigmatic real estate agent Miss Logan (Ava Gardner), it turns out only a blind, reclusive priest that lives on the top floor, "looking" out his window, and Alison reside in the building that stands. In fact, that apartment might just be a gateway to H-E Double Hockey Sticks.

A pretty eerie chiller, "The Sentinel" strings us along with some good B-movie scares and a disturbingly outlandish twist. Based on the same-named novel by Jeffrey Konvitz who co-wrote the screenplay with director Michael Winner, the film has some evil surprises even if the twist is only sketchily developed. One creepy shock involving Alison's encounter with her corpsy father in the empty apartment above is truly the high point. Raines is engaging as heroine Alison, Eli Wallach is amusingly showy as a detective, and some other supporting members of the big-name cast give very actorly turns. Watch for a young Jeff Goldblum and Christopher Walken in bit parts. Not quite up to the stature of Roman Polanski's "Rosemary's Baby," but "The Sentinel" is scary enough.