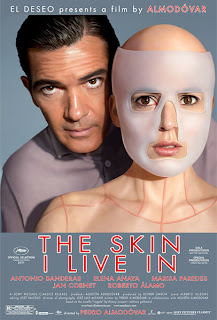 The Skin I Live In (2011)
117 min., rated R.
Grade:  B +
"The Skin I Live In" is strange, layered, provocative, audacious, perverse, and beautiful. It must be a film by Spanish writer-director-auteur Pedro Almodóvar (2009's "Broken Embraces"). This is far from just another torture horror film, although its ideas are definitely horror-like, but it's a Frankenstein tale, based on Thierry Jonquet's novel "Tarantula," about gender, sexual identity, obsession, revenge, and survival. Like the line from one character saying "I have insanity in my entrails," Almodóvar's film has insanity in its entrails as well, but never delves into howling absurdity.

Antonio Banderas, reteaming with Almodóvar for the first time since 1990's "Tie Me Up! Tie Me Down!," plays plastic surgeon Dr. Robert Ledgard, who's focused on creating a synthetic skin that's resistant to any kind of damage. He's been experimenting with the process of transgenesis ever since his wife, Gal, burned to death in a car accident twelve years ago. Now, inside his Toledo, Spain estate, he keeps a flawlessly skinned woman named Vera (Elena Anaya), locked in a room to wear a skin-colored jumpsuit and do yoga and read books all day. Robert has a dutiful servant, Marilia (Marisa Paredes), that lives there to clean and prepare meals for both Robert and his "patient" through the dumbwaiter while keeping a close eye on the guinea pig via video monitors. Who is Vera and how did she get there?

"The Skin I Live In" tells its tale out of sequence, and it probably wouldn't hold as much of an impact if told with a linear structure. There's a sort of elegance about the storytelling. The first half hour is quite intriguing, percolating with kinky, voyeuristic tension, but where it goes from there is even more unpredictable and unsettling. As the film rewinds to six years earlier, the onion layers are peeled away and gradually reveal the source of Robert's obsession through his tortured past involving his social-phobic daughter, Norma (Blanca Suárez), and her pill-popping rapist, Vincente (Jan Cornet). At the staggering halfway point, the pieces come together and the knots in your stomach really start forming. Then emotion slowly sneaks into this bizarre, grotesque story's veins, especially in the perfectly abrupt final scene.

The structure of "The Skin I Live In" is like a house of cards that, if more plot secrets were revealed here, would collapse. Then again, the film is really about the characters, not plot gimmicks, and how their facades converge with their pasts. With allusions to Hitchcock's "Rebecca," "Vertigo," and the 1960 French horror classic "Eyes Without a Face," Almodóvar manipulates us without making us feel cheated or tricked. And like a true horror film, this one actually disturbs without just being disgusting.

Banderas is understatedly creepy and slick as Robert, and yet he never feels like a stock "mad scientist." He has a past that makes him more protective of Vera than antagonistic. Anaya is not only breathtaking in her beauty as Vera but in the way she challenges herself with the film's trickiest role. Without getting into character specifics, the actress plays every note convincingly. Aside from an attack by a man in a tiger suit, Anaya never feels like a victim toward Robert. Once we learn more about Vera, she breaks our heart.

On the surface, the film has been artfully crafted with a sleek elegance that's as precise and sterilized as Vera's skin. Between Alberto Iglesias' excellently melodramatic score and Jose Luis Alcaine's creamy cinematography, this is a silky-smooth production of dedicated collaboration. Some of the themes might've been deepened had we connected with the characters early on, but this story is more detached, and wouldn't work without that specifically campy-chilly tone which Almodóvar gets so right. Those looking for complete compassion won't be watching the right film, but "The Skin I Live In" is not devoid of emotion; you just have to peel away all the perfect skin to see it. 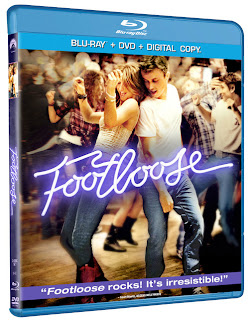 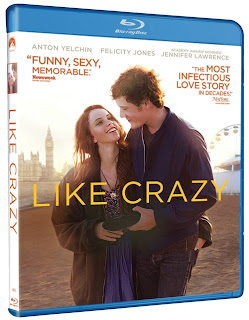 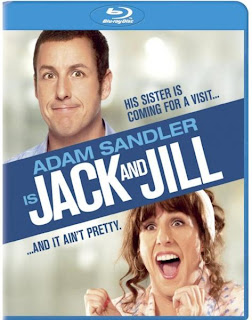 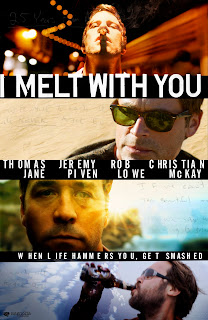 Dabbling in a most sensitive stint with 2008's "Henry Poole Was Here," director Mark Pellington reverts back to the darkness of his earlier work (1999's "Arlington Road" and 2002's "The Mothman Prophecies") with his grimmest film yet. The Generation X bummer, "I Melt with You," appropriately melts into a sea of bleak hopelessness. But without being completely futile, the film is a mixed bag. It's numbingly in-your-face, boldly oppressive, and startling all at once, that it will surely polarize oneself and audiences alike.

Written by Pellington's friend, first-time screenwriter Glenn Porter, the film follows 44-year-old college buddies Rich (Thomas Jane), a womanizing writer-turned-professor; Ron (Jeremy Piven), a stock trader in deep; Jonathan (Rob Lowe), a doctor whose business has turned into a recreational drug store; and Tim (Christian McKay), a gay artist harboring tragic loss. Back together at their California bachelor pad hovering above the cliffs of the ocean, they act like they're in college again, getting inebriated and high as a kite three days straight. By the fourth day, a pact they made long ago begins to haunt them, and all four men, who are all dealing with demons, go down the rabbit hole. Meanwhile, the bored local deputy (Carla Gugino) pops her head into their beach house when she notices something's not right in her jurisdiction.

As a former music-video director, Pellington depicts the characters' binging like a garish mirage with Eric Schmidt's scorching, hypnotic cinematography. He never glorifies their substance abuse and crisises; the guys' scenes of getting high and then each going on a downward spiral into self-pity are truly troubling. Pellington also packs very good punk-rock/New Wave music selections (by The Sex Pistols, The Clash, Joan Jett, and The Jesus and Mary Chain) into the pulsating soundtrack. And yes, a moody cover of Modern English's "I Melt with You" plays over the end credits.

Driven by its music and characters, "I Melt with You" achieves profundity here and there, but it's kind of a long, painful slog. It doesn't fail from lack of trying. The four of these actors never play it safe, but go to dark, emotionally naked places that we've never seen from them before. With scene after scene of chugging, snorting, and smoking, and then crying and dying, we just really don't want to spend time with these loathsome jerks any longer. Being forty never looked so sad and pathetic.