Merely OK "The Watch" only worth bargain-bin purchase at Costco 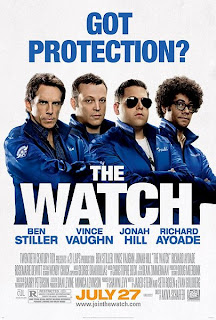 Director Akiva Schaffer, one-third of Andy Samberg's Lonely Island comedy troupe that broke out on SNL, follows up his 2007 feature debut "Hot Rod" with the R-rated, mass-market comedy "The Watch." Though the title was re-tweaked (originally called "Neighborhood Watch" in the developmental stages) to avoid links to the Trayvon Martin shooting by a Florida neighborhood watch captain, the film is really just an alien-invasion romp that rips from "Ghostbusters," "The 'Burbs," "Men in Black," "Evolution," and "Attack the Block," all of which are much better movies, and then adds a fistful of penis-centric jokes. When funny people are involved, behind and in front of the camera, we can't wait to laugh so hard that our bellies hurt. In the case of "The Watch," it's not as funny as it ought to be, but amusing enough that it should assuage anyone dying to see such a bankable team of comedy performers save the world from extraterrestrials.

In Glenview, Ohio, USA, Earth, the proud manager of Costco, Evan (Ben Stiller), is involved in about every club available in his town and friendly to everyone around him. Thrilled to hear his nighttime security guard has received his U.S. citizenship, Evan is terrified to find his wholesale store roped off in the morning, with the employee found ripped apart and dead. With a killer out there, the already-busy local decides to form a neighborhood watch. The only three that show up to the meeting are Bob (Vince Vaughn), a rowdy family man looking for male-bonding; Franklin (Jonah Hill), a high school dropout and police academy reject (à la "21 Jump Street") that still lives at home; and Jamarcus (Richard Ayoade), the token black Brit hoping to get attention from women. Though the team's first stakeout doesn't go as planned, and the clueless Sgt. Bressman (Will Forte) thinks 'the watch' is a joke, evidence points to an alien invasion. 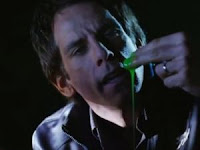 Getting together a four-pack of comic reliables is half the battle, while giving them funny material to achieve lightning in a bottle is another matter. "The Watch" marks Seth Rogen & Evan Goldberg's fourth writing collaboration, along with co-writer Jared Stern (2011's "Mr. Popper's Penguins"), but much of the script seems to rely on riffing and off-the-page improv. Some of it works, and some of it falls as flat as a UFO. Stiller and Vaughn do their "thing," the former acting uptight and growing irritable, while the latter does his loud, excitable fast-talking shtick. Coming off his physical transformation and the great success of "21 Jump Street" (one of the funniest comedies of this year so far), Hill is ready to rip with a more off-kilter side. Too bad his character of Franklin is written solely as a disturbed, borderline-psychotic young man, with Travis Bickle-ish echoes of Rogen's Ronnie in 2009's "Observe and Report," that the star's likability is lost. The film's newcomer, British comedian Ayoade (the director of 2011's quirky gem "Submarine," which Stiller produced), gets to showcase his offbeat, endearingly goofy presence on screen, but the script underserves him and his skills.

Amidst the occasionally creepy alien attacks and our heroes' beer-drinking stakeouts are a few other subplots. Evan and his wife Abby (Rosemarie DeWitt, who's better than this) want to have a baby, but such fertility drama feels wedged-in for would-be character conflict. Bob is also dealing with the rebellious nature of his teenage daughter Chelsea (Erin Moriarty), but there's actually a payoff to that thread. Cued to Echo & The Bunnymen's "People Are Strange," paranoia abounds when the watch team discovers the aliens take on human hosts, in the style of "Invasion of the Body Snatchers" and "The Thing." An uncredited Billy Crudup turns up as Evan's creepy, vaguely gay neighbor that compliments him on his good skin. He's weirdly seductive, but only serves as a red herring. What he's doing in his basement becomes pretty obvious before it's actually revealed. R. Lee Ermey, who could outshout Vaughn any day, is even wasted as a crotchety, rifle-wielding suspect.

"The Watch" falls short of delivering belly laughs, but it has nuggets of comedy, which are too infrequent, that still exist in the form of spontaneous line-readings and little oddball touches. There's some funny business involving Vaughn playing around with Russian nesting dolls at the first watch meeting. The guys have wild shenanigans with the aliens' laser orb, and then take a naughty photo shoot with a dead alien in Bob's man cave. Look at the way Ayoade attempts to shoo one of the creatures out the door. Also, before the big, gunfire-ridden showdown in Costco, three members of the group have trouble opening packages of pink walkie-talkies in a moment of quiet fumbling. Slo-mo climactic shots of a severed alien head and Trojan Magnum Condoms exploding into the sky might even elicit an easy chuckle. If only so many jokes didn't aim below the belt, literally. Comparing the alien green slime to the texture, taste, and consistency of semen? It's that variety of humor that often feels lazy and half-hearted, especially when R-rated comedies throw out wit and creativity to see what can push the envelope. It's an unmemorable no-brainer, but not without a "ha-ha" here and an "LOL" there, and some gory alien fun. "The Watch" was made to be watched as a bargain-bin purchase at Costco.