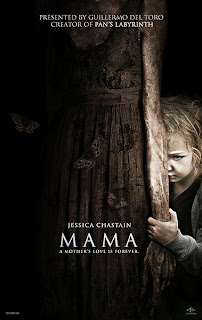 Judging by the opening card, "Once upon a time…," and the child-like writing and drawings in the opening credits, "Mama" works ever so beautifully as a horror-tinged fairy tale. As Guillermo del Toro tends to do, he finds first-time directors and produces their movies (J.A. Bayona's "The Orphanage" and Troy Nixey's "Don't Be Afraid of the Dark"), which are filled with calling cards from del Toro's own "Pan's Labyrinth," from the dark fairy-tale leanings with children in peril to the gothic, elegantly grotesque visuals. The directing bow of Andy Muschietti, "Mama" is a feature expansion of his 2008 Spanish-language short film, but it's more involving and vividly realized than the concept of padding a two-and-a-half-minute-long jolt would suggest. Even though it leans heavily on jump-making scares, accompanied by a sudden boom! on the soundtrack—and sure, they do their job—the film, with its stark yet fun tone, holds an uncompromising grip on a mother's instincts and undying love.

Once upon a time, an unhinged father (Nikolaj Coster-Waldau) is driven off the deep end from 2008's financial panic. He murders his wife, snatches up his two little daughters, and drives off with them onto a snow-covered road. After he loses control of the car, he and his girls stumble upon a remote cabin in the woods. Right before the man prepares to put three bullets to use, something stops him and watches over the two girls. Five years later, 8-year-old Victoria (Megan Charpentier) and 6-year-old Lilly (Isabelle Nélisse) are found in the cabin, having learned to crawl on all fours like feral animals and survive on cherries. Their artist uncle Lucas (Coster-Waldau in a dual role) and his punk-rock guitarist girlfriend Annabel (Jessica Chastain) gain custody and are offered a suburban home to raise the girls with frequent visits from psychiatrist Dr. Dreyfuss (Daniel Kash). Victoria and Lilly have a real chance at normal lives, even though Annabel isn't quite the nurturing mother type. She gives it a go for Lucas' sake, but the girls' supernatural guardian from the cabin, known as Mama, isn't about to give them up. And then no one lives happily ever after.

Director Andy Muschietti and co-writers Neill Cross and Barbara Muschietti (the director's sister) tighten the screws right from the watchably grim bang of a prologue. The existence of Mama isn't kept a secret from the audience, but in a wise decision, it's a while until we get a good look at her. In a subtle touch, a then-3-year-old Victoria first spots Mama outside of the cabin, telling her father that the woman is "not touching the floor." It's an off-screen image that's much more frightening when left to our imagination. When we catch a glimpse of the gangly, rail-thin banshee with wavy hair in a doorway or in a deep-focus shot, or hear her howling and singing a lullaby, Mama is a truly creepy creation. (She's played by 7-foot-tall Spanish actor Javier Botet, who brought the skin-and-bones zombie Niña Medeiros to frightening life in the "[REC]" pictures.) And when sprinting at the camera to surprise a few characters, she's mined for a few frightful jolts, but more exposure than that deflates the terror and shows her off as a CG specter. In addition, the script wants to develop the titular Mama with a little backstory. There is some standard detective work through asylum records and expository dialogue, but most imaginative of all is a staggering, strikingly visualized dream-within-a-dream that explains the overprotective mother's origins through the eyes of Mama herself.

Muschietti not only knows when and where to plant jolts for the easily nervy but crafts a mounting dread and spooky atmosphere out of sunny daytime juxtaposed with night terrors and rustic autumn. Also, he effectively recognizes the power of suggestion on more than one occasion. One shot, especially, makes expert use of framing and attention to detail without showing much; the camera rests in the hallway, with the girls' bedroom to the right side of the frame and the door open far enough to see Lilly playing tug-of-war with someone that isn't Victoria. If you've been looking for some of the most evocative, shuddering nightmare images since "Insidious," look no further.

Rocked out in a short, dark cut, heavy eyeliner, and a tattoo sleeve, Chastain seems capable of anything, and that goes for believably sporting a Misfits T-shirt. Her Annabel is such a spiky, strong-willed character, but the versatile character keeps her likable and sympathetic, even when she excitably rejoices over a negative pregnancy test. Chastain shot this before becoming a household name and classes up every project she takes on. Whereas some pundits will accuse her of slumming here (simply because it's a horror film being released in January), she's terrific as ever. Though sidelined pretty early when placed in the hospital from an "accident," so Annabel can grudgingly play mom to the girls and make Mama jealous, Coster-Waldau still ably conveys madness and compassion in playing brothers Jeffrey and Lucas. As Victoria and Lilly, Charpentier and Nélisse are quite impressive. The former portrays the comparatively normal one, while the latter remains primitive and so attached to Mama that she finds comfort in sleeping under the bed and chewing on her sister's hair.

A few plot setups and happenings must be taken with a grain of salt, including how it takes five years until the girls are found in the cabin, let alone the crashed automobile. With the film on its way to a cliffside finale, it's a shame the script had to rely on contrivances to get there (i.e. Lucas having a dream that points him in the right direction, Lucas and Annabel reuniting on a stretch of road). But, while everything could've gone off the rails from there, the final set-piece aberrates from the typical horror-movie showdown and builds to a haunting, unexpectedly heartbreaking conclusion. Valuing old-school chills over new-school gore, "Mama" works not only as an old-fashioned don't-look-under-the-bed horror tale but a mournful ode to motherhood.