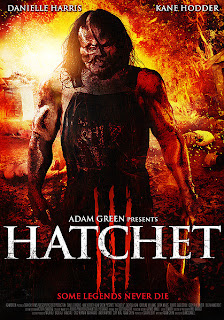 Staunch horror junkies crave what they crave, and they obviously craved for more Victor Crowley doing what he does best. Indie writer-director Adam Green must not have known he'd have a series on his hands (or maybe he did) when his 2007 low-budget effort "Hatchet," a fun, cheeky, gleefully gory throwback to "Old-School American Horror," took the horror community by storm. What 2010's witless, repetitious "Hatchet II" lacked in low-budget charm and brains made up for in over-the-top, crowd-cheering buckets of blood and gore, if that counts for something. Normally, another horror sequel (with a Roman numeral in the title) about an unstoppable, kill-happy "repeater" wouldn't sound like it could hack out the goods. Regardless, "Hatchet III" makes no bones about what it is — an amusing, gloriously gory body-count movie. It might repeat itself but does its job better than expected.

Per usual, "Hatchet III" picks up from the final frame of "Hatchet II." Barely escaping with her life and finishing off the hideous, unkillable Victor Crowley (Kane Hodder), who has the face only a mother could love, heroine Marybeth (Danielle Harris) is suspected of committing Crowley's massacre and held in custody by skeptical Sheriff Fowler (Zach Galligan). Journalist/Fowler's ex-wife Amanda (Caroline Williams) is also an expert on the legend of Crowley, so she requests Marybeth's help because, natch, she's the only one who can make the murders stop in Louisiana swamp country. Here's a tip: don't try attaching yourself to any character because, most likely, no one will be around long enough before becoming steak tartare. Skulls get crushed like watermelons, viscera flows, and blood splatters like a geyser at Yellowstone National Park.

Screenwriter Green is back to the pen but has passed the directing torch to experienced camera operator BJ McDonnell, who makes his debut here. The pic is hokey and never scary, but the director is never any less unapologetic about delivering quick, nasty jolts and gruesome, blood-soaked kills, courtesy of practical effects and silicone, with the same severed-tongue-in-cheek tone. There is a sparing amount of winks and nudges without becoming an outright spoof, and there are fun little nuggets that call back to Green's original. The pacing is also snappier than ever; it isn't front-loaded with a feet-dragging wind-up before the slashing like the first and is never as uneven as the first sequel.

Scream queen Harris reprises her take-over role as Marybeth, looking weary but upping her pissed-off sass. Galligan, of "Gremlins" fame, broadly chews apart the scenery as much as Crowley does with his bare hands and weapons. Williams, who will always be plucky, spirited deejay Stretch from "The Texas Chainsaw Massacre 2," is just as energetic and committed here as the exposition dumper. As a bonus, Rob Zombie favorite Haig turns up as an enjoyably ornery old man and creator Green continues his cameo appearance as that same drunken Mardi Gras partier. It's also kind of fun to see the longtime Jason Voorhees (Hodder) and the 2009 "Friday the 13th" remake's Jason (Derek Mears, playing a SWAT team leader) go head to head at one point.

Any horror fan knows that you have to go through a lot of horror pics to find a good one. Provided that you know bad acting and ticky-tacky effects (like the blood-spraying stumps) are often inherent to the fun of the genre, "Hatchet III" isn't what you'd call "good" or serious horror cinema, but, at the very least, it offers up a good time. As the alleged capper of this complete trilogy, it's purely a horror flick you can enjoy and then shrug off but still puts a pleasing stake (actually, a tree limb) into the series.