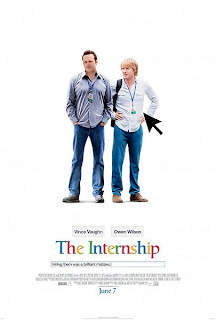 For whatever reason, it took Vince Vaughn and Owen Wilson eight years after 2005's uproariously funny and cheerfully sleazy "Wedding Crashers" to team up again. The comedic duo's latest vehicle, "The Internship," has a weak-tea, more commercial and much safer PG-13 rating compared to their R-rated raunchfest, but these guys' timing and riffing, as well as a speckling of laughs, actually goes a long way to keep this studio summer comedy from being a total wash. If one is expecting the free-wheeling raunch and/or edge that these comedy performers are fully capable of, no dice. Pleasant but tepid, it's better than "The Hangover Part III," thank you very much.

Being the last ones to know about their designer-watch company going under, best friends and salesmen Billy (Vaughn) and Nick (Wilson) are left jobless. To make matters worse, the former comes home to his girlfriend leaving him and their house being foreclosed and the latter gets a thankless job at a mattress store with his sister's boyfriend (Will Ferrell, doing his lecherous-doofus thing in an amusing cameo). Though they're both out of touch with the digital age and far from being tech-savvy, Billy finds them a summer internship at the search-engine giant, Google, which could lead to a job. On campus, they fail to make a good impression on the program manager (Aasif Mandvi, on point), but their team leader Lyle (Josh Brener), a straining-to-be-cool nerd who took a chance on them in the acceptance process, lumps in the over-the-hill "dinosaurs" with a team of fellow twentysomething outcasts—among them, the surly, condescending Stuart (Dylan O'Brien); the fashionably dressed but inexperienced Neha (Tiya Sircar); and the painfully introverted Yo-Yo Santos (newcomer Tobit Raphael). Put through different challenges, the teams compete for a permanent job with the corporation. Will the unqualified Billy and Nick get in touch with their inner "Googliness"?

Directed by cookie-cutter filmmaker Shawn Levy (who had luck with "Cheaper by the Dozen" and "Date Night" but not the remake of "The Pink Panther" or much else), the film is awfully inoffensive (even the strippers at a club are well-covered), overlong, and not sharp enough, but it's never charmless or too infantile. Instead of a rude and crude boys-will-be-boys laugh riot, "The Internship" is a two-hour Google ad, to the extent that some of it was shot on-location; a culture-clash comedy; and a life-lessons-learned underdog formula. The forward-thinking Disneyland-for-techies seems like an ultra-cool, laid-back workplace; primary colors, free coffee, bagels, and bananas; "nap pods"; an amusement park slide in the lobby; and the reminder that Googlers make a difference in the world. Taking into account that Vaughn and Wilson are only in their forties (not old enough to not know how to use a webcam or be this tech-challenged), the central joke works better than it might seem and, predictably (that is, if you've never seen "Revenge of the Nerds" or any band-of-misfits feel-gooder under the sun), everything works out in the end.

Flat and exasperating at the onset, "The Internship" takes a while to set things up and has the stars going back to a seemingly dry well. Then, before the viewer jumps the gun in writing this off completely, Billy and Nick make it to the Google campus after a cringe-inducingly inept Skype interview in a children's library and things start to coast along on good-naturedness. Co-written by Vaughn and Jared Stern (2012's "The Watch"), the script falls into the occasional snag, however. There is a full game of Quidditch that's less amusing than it sounds (though Wilson does sell one line when the "Golden Snitch" appears on the field). The joke that Billy confuses "on the line" with "online" gets hammered into the ground, even after his interns repeatedly correct him. An "X-Men" gag, which was unfunny in the trailer, is unfunny. Even the stakes are pretty low, despite how Lyle's team expresses the hardships of finding a job after college and there being a smarmy, snobby competitor in the form of an English intern named Graham (Max Minghella, stuck in an annoyingly one-note role), who even scolds his own teammate for being overweight.

Vaughn and Wilson, individually and together, are insurance for a movie comedy, even if they never decide to mix up their shtick. We have the fast-talking salesman and the shaggy-haired nice guy again, but they do have a comfortable brother-like rapport and bring out the best in one another. Luckily, there are some nice supporting performances as well, particularly the eye-catching, charismatic Sircar, casting an impression as Neha who claims to be "fun" but confesses to be inexperienced in life. The adorable Rose Byrne, with her Australian accent intact for once, is mostly a love interest for Nick, but as workhorse exec Dana, she shares a sincerely sweet chemistry with Wilson, especially on a date that's more interesting than expected. Josh Gad even has a little surprise as Headphones, a secret coder who sits alone at lunch.

Does it have less replay value than "Wedding Crashers"? Affirmative, but on behalf of the interplay between Vaughn, Wilson, and their likable younger co-stars, it's affable. Shameless product placement aside, you may want to google the company yourself and apply.