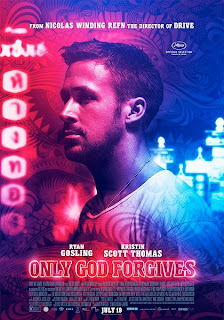 "Only God Forgives" makes room for comparison to 2011's "Drive," being the follow-up to that earlier film's match made in heaven with Danish director Nicolas Winding Refn, actor Ryan Gosling, and, for that matter, composer Cliff Martinez. While many were let down that the first Refn-Gosling effort didn't move at hyper-speed and didn't offer more car racing, it was a one-of-a-kind work of pop art. Naysayers and even disciples of that comparatively mainstream picture aren't even going to know how to respond to "Only God Forgives," which is much more experimental in style and even more mercilessly violent but still a mesmerizing experience no matter how you slice it.

Gosling has always taken more chances than most charming, studly actors out of Hollywood but, now more than ever, he's making more artfully bold, Marlon Brando-esque choices. His character, Julian, could be kindred spirits with Driver from "Drive," speaking even fewer words. In Bangkok, he runs a Muay Thai boxing hall as a front for his drug ring with reprehensible older brother Billy (Tom Burke), who rapes and kills an underage prostitute. Corrupt Lieutenant Chang (Vithaya Pansringarm) pursues justice by getting the prostitute's father to kill Billy and then kills the father himself with a samurai sword, which comes scraping out of his backside on more than one occasion. When Billy and Julian's wicked, trade-managing mother, Crystal (Kristin Scott Thomas), flies in from Florida, she wants her son's killer dead and she wants Julian to do her bidding.

A revenge story stripped down to its barest essentials, "Only God Forgives" is really a piece of nearly silent storytelling told through Refn's own methodical but potent sensory style. In concert, director of photography Larry Smith's lurid cinematography, along with impeccable shot compositions, and Cliff Martinez's pounding synth-heavy score give the picture's seedy Thai underworld a vibrant, dreamy atmosphere in a neon nightmare. Artfully shot and phantasmagorically lighted to the nines, the film has a menacing mood and a sense of portent in every dark, crimson-filtered hallway and pink-tinted lounges. Refn is never lily-livered when it comes to depicting violence with shocking flair, not only lighting it as all get-out but making sure we feel every brutality like a punch to the gut. This is brutally nasty stuff, particularly during Chang's wince-inducing interrogation with hair pins to the sensory organs of one of Crystal's thugs. Get ready to recoil in your seats.

All of the characters are depraved, designed more as abstract ideas than flesh-and-blood people, and most of them have a God complex. An intentional choice or not, it's hard to feel much for anyone or know whom we should be rooting for in the long run. Gosling's work is so internal, bordering on one-note and comatose. Beyond the intensely serious posturing, poker-faced stares, and cracks of anger with a fraction of compassion, Julian is a brooding cipher, an enigmatic shell of a human being whose soul must have been tainted by Mother, but made more magnetic and cool by Gosling. His relationship, such as it is, with his favorite prostitute, Mai (Yayaying Rhatha Phongam), consists mostly of inexpressive glances and hands between legs. On the other hand, there's more than an implication of oedipal incest between Julian and Crystal—and, based on dialogue, Billy and Crystal, too, for that matter.

Harshly made up around the eyes and donning a bleached blonde wig, Scott Thomas chews up the scenery and spits it out with venom as the unhinged, lewd-mouthed, and casually cruel mother Crystal, who believes favorite son Billy had "his reasons." In a deliciously vampy performance, she devilishly owns all of her scenes, especially when checking into her hotel and letting the front desk girl have it and then having no problem bringing up Julian's "shortcomings" over dinner with Mai. Credit must also be given to Pansringarm: he has total command of the screen, oozing bona fide intimidation even as he walks slowly in an upright position. There's also a welcome degree of absurdity when Chang frequents a karaoke club and sings love songs to a catatonic audience of fellow police officers.

The pairing of Refn and Gosling is intriguing enough to desire more from them. What they pulled off with "Drive" was electrifying and undeniably lyrical, even when punctuated by its bursts of pulpy noir savagery. Nowhere near as rich in power as its spiritual predecessor, "Only God Forgives" still shouldn't be denounced as meretricious rubbish. A work of hypnotic style over cut-and-dried content can't be denied of wearing Kubrickian and Lynchian influences on its sleeve, but is it ever a forceful, aesthetically stylish piece of filmmaking that plays like a haunting, hyper-violent opera.