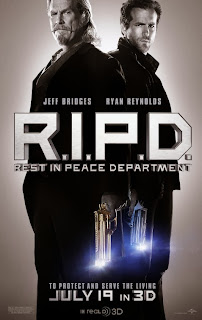 At the time of its release in July, "R.I.P.D." was hidden from critics. An intentionally jokey, tongue-in-cheek time-waster, this sci-fi action-comedy isn't bad as much as it's just instantly disposable as the anti-watercooler movie of the summer. It's adapted from Peter M. Lenkov's Dark Horse comic book, but as directed by Robert Schwentke (2010's "RED") and written by Phil Hay & Matt Manfredi (2010's "Clash of the Titans"), with Phil Hay and Matt Manfredi credited for story, the movie mostly feels like a first draft, cobbled together from 1997's "Men in Black" and in need of some punching up. (For what it's worth, there's even a mute, motionless clerk, this time at an audio-visual appliance store instead of a newspaper stand.) And yet, what ended up making its way to the screen is hard to get fumed about.

Having 15 years on the force, Boston's finest Nick Walker (Ryan Reynolds) has been trying to bust a drug lord, while hiding a set of gold bars from an earlier deal. In a warehouse raid that could end the case, he's popped dead by his turncoat partner Hayes (Kevin Bacon). Somehow, Nick wakes up, but he's dead. Ascending to the afterlife, he manages to escape judgment and gets pulled into the offices of the Rest in Peace Department, an agency that recruits deceased police officers to patrol the afterlife. Nick is then partnered up with Roy (Jeff Bridges), a crusty, rootin'-tootin' ex-U.S. Marshal from the 1800s, and out to arrest "Deados," monstrous spirits that never crossed over and returned to Earth for destruction. Meanwhile, Patrick Swayne and Demi Moore style, Nick tries to reconnect with his wife Julia (Stephanie Szostak), Patrick Swayze-Demi Moore style, but the scheming Hayes tries convincing her that Nick might not have been the man she thought she knew.

Over and done with in a zippy 96 minutes, "R.I.P.D." is only ever sporadically fun. There was potential for an even more inspired and more expansive movie here, but a ruthlessly frivolous lark is fine, too. Still, in lieu of exploring this world, the screenplay mostly becomes a derivative cops-and-criminals story with a supernatural bent and gold being the MacGuffin. When the duo goes into the world of the living, Nick appears, to the human characters at least, as an old Asian man and Roy's avatar is a hot, blonde Victoria's Secret model. It's a funny idea, but, except for a moment where Roy is picked up by a music-video maker and an image switch on Nick's part at the end, little humor that doesn't go for the obvious is mined from that. A more sophomoric example is having the partners interrogate a physically repulsive Deado, who's repulsed by the sight of Indian food and then burps and farts.

As Nick and Roy, Reynolds has a dexterity with rapid-fire banter and Bridges hams it all the way to the piggy farm with cowboy vim and vigor. Both of them have the good grace to not take the material seriously, too, and it's their loose mismatched-buddy chemistry that gives the movie a few kicks of energy. As R.I.P.D. commanding officer Mildred Proctor, Mary-Louise Parker is a good sport, flitting in and out to deliver an acerbic line and shovel out exposition to Nick without blinking an eye. Watching her sensually bite Bridges' beard in the end (something he calls "billy goating") is kind of a loopy delight, but how did she even get roped into taking such a thankless part? Szostak and Bacon do little more than capably service the plot.

Even with a lightning pace, slick cinematography, decent CG work, and specks of weird creativity (i.e. incognito Deados inhale black pepper to transform into their true selves), the fact that it can't rile up more chuckles to go with its energy is a failing. If action and humor are all a film has going for it, then it better fire on all cylinders. It isn't without turn-your-mind-off entertainment value, squeaking by with a few sight gags and certain to please the teenage boy that likes anything cartoony and frenetic. Again, nothing crummy, but "R.I.P.D." goes through one eye and out the other as one of those movies that you'll forget ever existed.