Life with Do-Overs: "About Time" an unconditional charmer 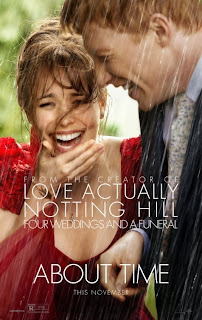 Sometimes, you just want a perfectly satisfying wish-fulfillment confection that's a little biting, not too twee, and guaranteed to charm your pants off. One can approach a new unabashedly squishy Richard Curtis movie with cynicism or just succumb to the comfort food. Another unconditional charmer, "About Time" might only be the third film he's both written and directed following his debut, 2003's universally loved and irresistibly charming holiday staple "Love Actually." And yet, he's also been the scribe for 1994's "Four Weddings and a Funeral," 1999's "Notting Hill," and 2001's "Bridget Jones's Diary," all very smart and winsome romantic comedies with enviably attractive people and Hugh Grant. Curtis' latest is a celebration of love and life, and this time, there's a new wrinkle, at least for him: time travel.

Bashful, ginger-haired Tim (Domhnall Gleeson) lives in seaside Cornwall with his family, and upon turning 21, Dad (Bill Nighy) lets him in on a family secret that will change his life forever. All of the men on his father's side are born with the gift to travel back in time by going to a dark place (i.e. a wardrobe) and clenching his fists; it can only be used for the past, not the future, but not far back enough to go and kill Hitler or shag Helen of Troy. So, for a summer, the "mother ship" is to snag himself a girlfriend, even though time travel cannot make someone love him. One night, he accompanies his buddy Jay (Will Merrick) to London's Dans Le Noir, where patrons are served in pitch blackness by the blind waitstaff, and meets Mary (Rachel McAdams), a beautiful American editor who's obsessed with Kate Moss. Tim falls in love with Mary immediately, but when he changes events that went wrong for others in his life that same night, he undoes the special meeting of his soul mate. Luckily, he can re-meet Mary and woo her again, tweaking and improving each stumble he makes and giving himself a do-over. As Tim comes to learn from Dad, their gift is a mixed blessing, but for the most part, he can use it to make his life how he wants it.

Thoroughly capable of camouflaging the nuts and bolts of time travel with its whimsy and romanticism, "About Time" does fluff over its rules from time to time. Why only the men on Tim's dad's side were given this gift is just a means to an end; they just can. When Tim and Mary first meet, there's no manipulation of time needed, but once the butterfly effect is introduced, Tim makes a few decisions that are ethically questionable and not really acknowledged by the protagonist himself. Also, in a key moment between father and son, they are able to return to an unaltered present without any paradox. By the same token, the film is more about the characters and uses the fantasy hook in clever, funny ways without slipping into repetitiveness. For instance, Tim tries to set things right for acidic playwright roommate, Harry (Tom Hollander), on the opening night of his latest play, making sure one stage thespian (the late Richard Griffiths) remembers his lines this time. Of course, changing the past doesn't mean the performance will go off without a hitch for another thespian (Richard E. Grant). When wedding bells chime for he and Mary, Tim also keeps changing his best man after each of their speeches is worse than the last, and he can simply change a rough day into a good one. Curtis also stages the funniest Worst Wedding Reception, and it's hard to resist a montage set in a tube station that joyfully uses The Cure's "Friday I'm In Love."

Given his first major lead role as Tim, Gleeson (Brendan's son) is adorably appealing and embodies every word synonymous with "charming." Casting this lovably unassuming Irish actor was a shrewd decision in that, because of him, we're able to overlook some of the script's deficiencies. (Had Hugh Grant played Tim, manipulating Mary into loving him with the do-over might've made him potentially unctuous and unlikable.) As Mary, McAdams is lovely as ever, working within her wheelhouse of playing time travelers' wives and falling in love with a man again and again. Even if the story isn't solely about their relationship but about Tim's life in general, Gleeson and McAdams make one of the most naturally enchanting screen couples in recent years. The second half becomes more devoted to Tim's relationship with his father, played by Nighy, who's a pure delight as always and ensures an undeniable pathos. Self-deprecating and touching as a very loving father and husband, he enjoys the time spent playing ping-pong with his son.

With his upbeat view on life, writer-director Curtis knows how to carry out a story with witty dialogue, romantic moments, and lovable characters without condescending them or his audience. He's somehow able to manipulate us into falling for his characters so that little of the rule-breaking really matters in the long run. Preciously overlong as it might feel and not forever standing up to close scrutiny, "About Time" is unmistakably sweet and joyously life-affirming. At the end of the day, good old-fashioned charm carries it.