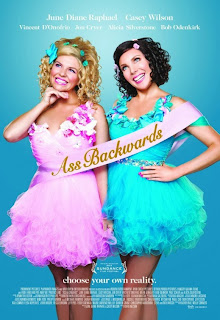 "Ass Backwards" is right. For comediennes, writing partners and best friends June Diane Raphael and Casey Wilson (who also co-star together), their indie dream project had a long, bumpy road of financing issues before having it released without the hand of a studio. This is all well and good, until one realizes that this road comedy, modeled as a female "Dumb & Dumber" after 1997's sweet and hilariously tart "Romy and Michele's High School Reunion," is a charm-free, painfully unfunny bad egg. It had a chance, but envision the dippy, fun-loving Romy and Michelle being steamrolled of their affection and airheaded likability and rewritten as delusional, dim-witted twits from another planet.

Codependent on one another, falsely confident best friends Kate (June Diane Raphael) and Chloe (Casey Wilson) live in Manhattan, kidding themselves that they have real careers. Kate is the CEO of her own business, meaning she donates her eggs to couples, and Chloe is a performer…in a glass cube at a nightclub. Once they receive an invitation from their small hometown of Neptune for the 50th anniversary of a beauty pageant, they cast their minds back to when they both finished dead last in their younger years. A run-in with self-involved, patronizing tiara winner Laurel (a one-note Alicia Silverstone) seals the deal that Kate and Chloe want to show their town how new and improved they are. Naturally, they're off on a not-so-excellent adventure of misadventures to get to the pageant. During their four-day road trip (even though their town is only four hours away from Manhattan), they find a pet rabbit to the side of the road; they're shocked to discover Chloe's father (Vincent D'Onofrio) has been hiding a secret; Kate keeps seeing little girls as all of her daughters; and they get starry-eyed when they run into a crack/sex-addict reality star (Brian Geraghty). Eventually, Kate and Chloe should realize they're not as smart as they thought they were.

Off the top, two parallel streams of liquid roll down a sidewalk and form one before revealing it's our two bare-assed heroines urinating on the stretch of concrete, and that's one of the film's high points. Directed to keep moving briskly by first-time helmer Chris Nelson, "Ass Backwards" treats these resistibly loud dummies as if we're supposed to be charmed and have a good time laughing at them. If you ever actually met people like Kate and Chloe in real life, run for the friggin' hills. They are broad, gratingly peppy sketch creations, writ large with infectiously daffy commitment by Raphael and Wilson (who was so likable and sharp-witted on the underappreciated, now-defunct TV series "Happy Endings"). In their first feature script, 2009's strident, lamely contrived "Bride Wars," best gal pals (Anne Hathaway and Kate Hudson) were turned into petty saboteurs after booking their nuptials on the same day and neither one of them budging. We'll chalk that one up to studio interference, but "Ass Backwards" is entirely their baby of a mess, as it, too, has it in for women. The women behind it are funny and they're the show (overshadowing Stone, D'Onofrio, Jon Cryer, and Bob Odenkirk), but how can we root for, let alone like, Kate and Chloe when they're such irritating losers oblivious of how pathetic they really are? Having the viewer desire taping their mouths shut and locking them in a closet probably wasn't the writers and stars' imagined goal.

Ultimately, Raphael and Wilson still get a pass for being the sole reasons a choice line or physical gag lands once in a while. They're willing to mug and do anything for a laugh (even if that means humiliating themselves). Both of them singing along to A-ha's '80s pop jam "Take on Me" on a CD that skips is a minor hoot. Chloe still reeling from a bad breakup from nine and a half years ago ("Very fresh…like yesterday") is a funny joke. One of the comedic situations, amateur night at a strip club that turns into a dirty competition and gets them thrown in the slammer, is more amusing than it sounds, but when the girls accidentally "rape" a biker at a lesbian commune, crickets. In the end, if the climactic pageant proves anything, it's that Kate and Chloe learn nothing and remain as childish and completely out of touch as we first found them. As a whole, "Ass Backwards" is proof that it's not only hard getting a movie made and distributed, but it's twice as hard to make a smart, funny "stupid" comedy.