M-E-A-N: "Bad Words" hilariously rude on the ears, underwritten on the page 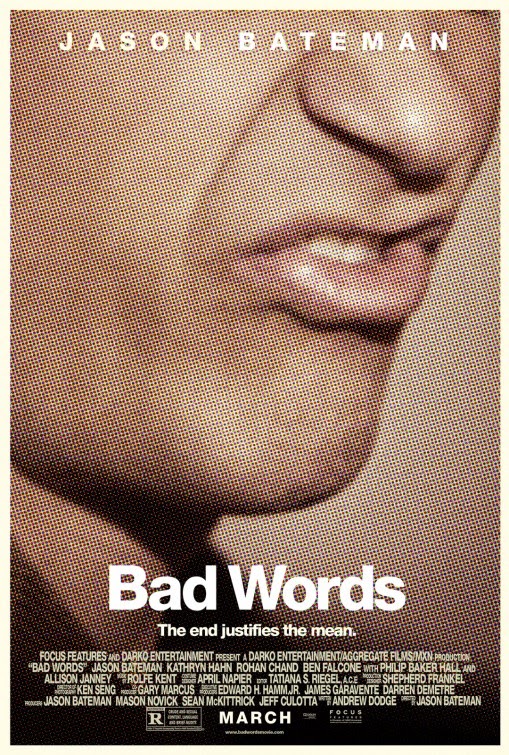 The directorial debut of actor Jason Bateman, "Bad Words" is unapologetically rude and mean-spirited and cruelly funny, but that's about it. Described as "'Bad Santa' with spelling bees" by Bateman himself, this black-hearted R-rated comedy surely delivers all the offensive barbs it shoots for, based on its title, however, the thing about a comedy feature is that characterization, logic, and story are usually still necessary to make the laughs matter. It's gleefully anarchic without being as subversive as it wants to be, but the real detriment is, whereas 2003's deliciously caustic "Bad Santa" snuck in some heart in an organic, albeit still-bawdy, way, "Bad Words" has no emotional core. Unfortunately, bad behavior does not always a good comedy make.

Bateman, this time, plays the smartest and meanest guy in the room. 40-year-old proofreader Guy Trilby is a misanthropic, insult-ready S.O.B. who has a smug disdain for everyone. In media res, he breezes through a regional spelling bee competition for elementary school kids in Columbus, Ohio. You see, Guy has found a loophole in the system—regardless of age, he never passed the 8th grade—and crashes onto the stage line-up to qualify for the national finals. Sponsored by a national media outlet, Guy won't tell anyone why he's so driven to compete, not even his own sponsor, Jenny Widgeon (Kathryn Hahn), a journalist who's bankrolled by her news website The Click and Scroll to write Guy's story and pay his way. (Evidently, it's in her contract to sleep with him, too). Then, on his way to the Golden Quill Spelling Bee in L.A., the ruthless, disgruntled Guy meets an Indian-American 10-year-old named Chaitanya (Rohan Chand): he's intelligent and relentlessly positive but lonely with no friends besides a binder of words. Guy takes to the little moppet, but no puerile antic is beneath him—you know, like conning an Asian boy into thinking Jenny's underwear is his mother's and then convincing a chubby girl that her "Aunt Flo" has arrived right before she's about to spell. What could possibly be motivating Guy to crush the dreams of ambitious 6th graders?

Directed by Bateman, who works from a thin screenplay by first-timer Andrew Dodge, "Bad Words" never seems to reach its fullest potential, aside from satirical live-TV coverage of the spelling bee and what exits the protagonist's mouth. The film's source of humor is dependent on acidic insults as punchlines, and while they are hilariously scathing and unfiltered, they mostly exist for shock's sake. There's even a gut-bustingly unhinged montage of Guy and Chaitainya going out for a night on the town of drinking, pranks, and a peek-a-boo with a prostitute. Guy and Chaitanya's efforts to sabotage one another also invite parallels to Wes Anderson's "Rushmore." Once Guy's motive for entering the spelling bee is finally unveiled, it seems like a meager reason and a case of too little, too late to garner any sympathy. His emotional pain might have resonated had the script not tried hiding it for so long or developed Guy into more than a one-note, consistently unlikable dirtbag. What remains fuzzy, too, is how Guy is an impeccable speller of such hundred-dollar words as "floccinaucinihilipilification" without any need for the definition, part of speech, or roots. He's established to be a genius with a photographic memory, but this is the most logical plan to settle a score? After he completes his goal, will Guy be a better man for it? Will getting to the root of his problems make him a real, functioning adult? No, no, and no.

Comfortably in his element as Guy, Bateman proves again why he's such a likably acerbic, verbally nimble comedian, keeping a deadpan face while letting out every reprehensible putdown with gusto, no matter one's gender, age, or race. It's not hard to love hating him, but caring about the unrepentantly awful Guy is nearly impossible. Funny, understandable a-holes are fine, but arbitrary, underwritten a-holes not so much. On the other hand, the director and star gave himself a sidekick who more than holds his own. Rohan Chand is a real discovery, an adorably sweet and naturally funny trip who can be precocious without stepping over the line into annoying. His smile never ceases, even when Guy calls him "Slumdog" and tells him to shut his "curry hole" before he threatens to tell the pilot his suitcase is ticking. One can't help but feel for Chaitanya, whose father makes him fly alone and stay in a different hotel. It's such a pity Bateman hasn't given the rest of his players more to do. Kathryn Hahn, who can be so absurdly funny, has one joke in the bedroom ("Don't look at me!"), but her character makes no sense, except to be the one person who first discovers Guy's secret. National treasure Allison Janney is criminally misused, as the tournament's uptight administrator hell-bent on getting Guy out, that all you can think of is what she could be doing instead. Philip Baker Hall amounts to a plot point as the bee's president Dr. Bowman, who commentates with Ben Falcone, but Rachael Harris lends some energy as an enraged mother who confronts Guy and gets slain by his vulgar words.

Fortunately, "Bad Words" does not completely force Guy to turn over a new leaf and become a classy, heartwarming guy. Before the end, he is still irresponsible, but the film treats his journey as such a rushed, preordained arc. The film is a worthy vehicle for Bateman's talents, and he shows promise behind the camera, but as soon as the credits roll, the viewer will be correct in their knee-jerk response, wondering "is that it?"