Bad to the Bone: Jude Law's full-throttle act is the point of "Don Hemingway" 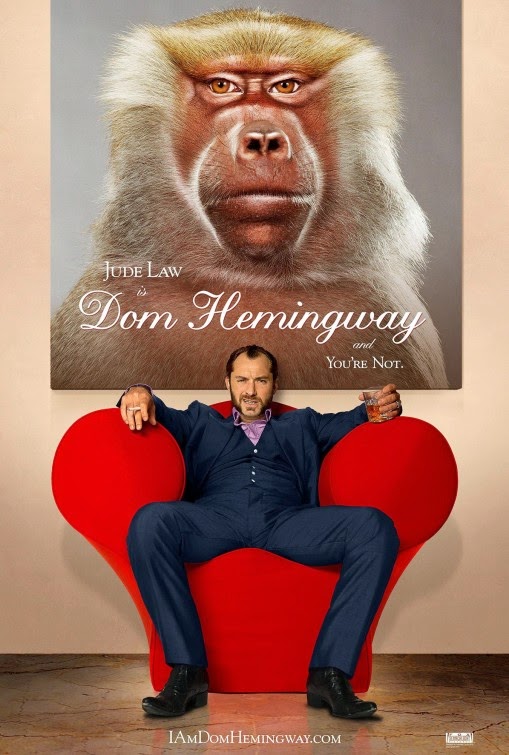 "Dom Hemingway" fancies itself a blackly comic, Guy Ritchie-esque character piece without so much as a detectable point. Diverting from his trademark of playing the ideal man, now-middle-aged matinee idol Jude Law eats up the title role of the Cockney criminal with thuggish gusto and a glint in his eye. His soliloquies tend to be punchy and wickedly funny. When Dom is who he is, saying what he wants to say and fiddling whom he wants to fiddle, "Dom Hemingway" is as caustic and devilish as it should be without making any apologies. However, as written and directed by Richard Shepard (2007's "The Hunting Party"), the film sets up its aim and then wanders, failing to explore a key relationship to grasp onto any emotional stake and just barely satisfying with its half-baked story. That the film doesn't amount to much is beside the point because this is Law's biggest, showiest show and everything else is just a prop. He's worth the price of admission.

Palpably stinking of sweat, booze and cigarettes, a mutton-chopped, broken-nosed Jude Law gleefully liberates himself of his sexy, suave ladies' man persona as the volatile, foul-mouthed, booze-soaked Dom Hemingway. We first meet Dom complimenting the Nobel Peace Prize-worthy power of his manhood, while receiving a blowjob in a prison shower. Serving twelve years for not ratting on his boss, the Cockney criminal gets out and immediately shows his hair-trigger rage issues, beating the snot out of a guy who had an affair with his now-late wife while he was locked up and even bites his ear, Mike Tyson-style. Like old times, Dom meets back up with Dickie (Richard E. Grant), his one-handed, trendily dressed partner in crime, and their boss, Mr. Fontaine (Demián Bichir). He thinks he's entitled to getting what he's owed, and finally, he does earn his present of $750,000 pounds. Then, following a car crash after a wild night of partying, Mr. Fontaine's Romanian trophy girlfriend Paolina (Madalina Ghenea) steals his loot. Turning up at the door of his musician daughter, Evelyn (Emilia Clarke), shit-faced with the "face of an abortion," Dom meets his African son-in-law (Nathan Stewart-Jarrett) and grandson (Jordan Nash), but she wants nothing to do with him. At rock bottom, he takes on a bet to crack a safe, a skill of his that he hasn't performed in twelve years. Can this last job turn Dom's bad luck around?

When it switches gears and morphs out of character into a would-be heartwarming father-daughter drama, "Dom Hemingway" curdles and wants to forgive its less-than-ingratiating eponymous monster. Had writer-director Shepard not looked back and followed through on and/or developed upon story threads he sets up, we might have been on to something consistent. The low-life we're following is a man of contradictions anyway, as he gives mouth-to-mouth to a sweet, idealistic hooker named Melody (Kerry Condon) after the car crash. Melody is like Dom's Fairy God Hooker, who clearly sees something in the consistently indecent lout that we and the rest of the characters do not, giving him a pearl of wisdom, like "Love is what you make, Dom." Complete redemption would have seemed unearned, and while there's hope for Dom (who finally sheds a tear during his daughter's club act), the conclusion is within spitting distance from getting mushy.

As the crass, teeth-baring Dom, the free-wheeling Law gives it his everything, frothing at the mouth, gorging on the scenery like it's chewing tobacco and demanding to be noticed as if he were holding a gun to every audience member's head. The actor tries to carve a crumb of empathy and regret out of this loathsome, unredeemable hooligan, but we're never given a convincing reason to care. That doesn't mean Law isn't still fun to watch in rare form; much like Leonardo DiCaprio in "The Wolf of Wall Street," one can't take his or her eyes off of Law (and not only because he's front and center of every scene). By comparison, Richard E. Grant is the film's buffer, achieving a more subtle act as the mildly expressive straight man and voice of reason for Dom's lewd behavior. As Dom's estranged daughter Evelyn, Emilia Clarke (HBO's "Game of Thrones") gets the most honest scene, conveying the constant disappointment and true hatred for the man she refuses to call "Dad."

The film gains an irresistible assist from punkish aural pleasures and visual flourishes. The Pixies' "Debaser" is an exhilarating choice for the capper; production design includes a memorably quirky touch with photographer Jill Greenberg's monkey portraits; and there's an archly funny car accident stylized in slow-motion and set to Puccini's operatic aria "O mio babbino caro" after a rollicking cocaine party. When "Dom Hemingway" tries to soften its anti-hero, the film threatens to be a cowardly drag, but when Law gets to be a shamelessly blustery and vulgar force of nature without a filter, it's a rampantly R-rated, rippingly in-your-face romp that's ultimately hard to dislike.