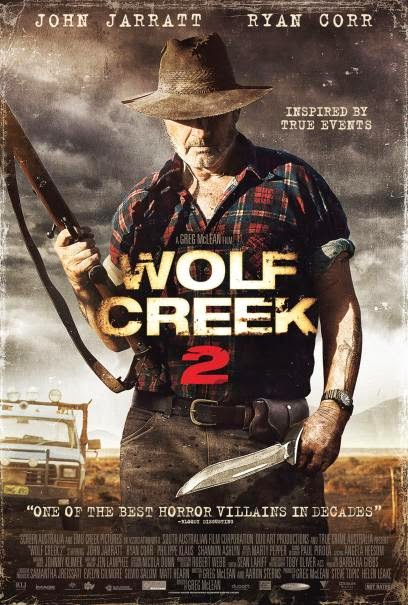 Back in 2005, there was an upgraded revival in down-and-dirty, hard-R horror thrillers that actually did the genre justice ("House of Wax" and "The Devil's Rejects"). The last of the bunch was a ferocious little Australian import called "Wolf Creek." Allegedly "based on true events," the unrelentingly tense, grimy and vicious nasty from Down Under most likely prevented real-life backpackers from ever setting foot in the Outback and made its proudest, most disturbingly grisly moment a "head on a stick." Discerning horror fans with trepidation about a sequel coming nine years after its predecessor should fear not, as "Wolf Creek 2," once again, aims for the jugular, the gut, and the spine. We learned what a real knife looked like, and now, this is a knife that's almost nearly as sharp.

Cutting his teeth on making features with "Wolf Creek," writer-director Greg McLean returns without losing his cutthroat urgency for building a dusty, humid air of dread and then setting the ground with deadly mouse traps. Nearly nine years later, we are back with jaunty but deeply sociopathic pig shooter Mick Taylor (John Jarratt). He's exposed from the very start since we already know he's a crazed Crocodile Dundee who has something to do with both films' statistic that "30,000 people go missing in the Australian Outback each year. 90% are found within a month. Some are never seen again." When German backpacking couple Rutger (Phillipe Klaus) and Katarina (Shannon Ashlyn) hitch rides to the Wolf Creek Crater walking trail, no one else will pick them up, so they decide to set up their tent. At night, Mick pulls his truck up to their tent and gives Rutger a hard time for not putting out their campfire. They're trespassers in Mick's country, so they'll have to go. When a hand-tied Katarina runs into British passerby Paul (Ryan Corr), the poor lad unwittingly finds himself at the hands of the sadistic Mick. Will he survive or end up in a pool of his own blood?

With a slightly longer running time but a tighter, more efficient pace, "Wolf Creek 2" still doesn't give enough time to flesh out its victims-to-be, who are clearly unaware of the events from the first film and just sympathetic by default. We were invested in the plight of the three protagonists the first time around because we spent the first forty minutes with them before the screaming and running started. Out of anyone, Paul more organically gains our rooting interest and puts the viewer into a lather, as he is a twentysomething Brit clearly passing through and just happening upon the wrong place at the wrong time. When it's just Paul and Mick, the film is like a rattling ride of terror that bears favorable resemblance to "Duel" and "The Hitcher," particularly with a thrillingly executed sequence involving a jeep and a semi each going down a steep hill. Director McLean and co-writer Aaron Sterns are far from reinventing the wheel—or, as the case may be here, the knife—but expectations are averted from the first half to the second. In a pre-titles opening that does not temper the tension or the gore, two highway patrol officers learn the hard way that they went messing with the wrong Aussie. After undeservedly receiving a speeding ticket, Mick, in pig-hunter fashion, tells one of the pigs, "That'll do, pig." Touched with some of the grimmest humor is a car chase, where "The Lion Sleeps Tonight (Wimba Way)" sounds and Mick and Paul are both bombarded by a troop of hopping kangaroos. Viewers who think both the hunter and huntee will stop and wait for the marsupials to cross need not apply.

An angry, barbaric, and loathsome but also charismatic mate, John Jaratt imbues so much personality into every utterance before showing his xenophobia and stark depravity. Mick sees it as his mission to exterminate "foreign vermin" out of his country: "It's up to my kind to wipe your kind out." As he certified nine years ago, Jaratt reaffirms Mick Taylor as one of the more threatening and memorable human monsters in horror cinema. Played by an appealing Ryan Corr, who bravely and credibly gets dragged through some emotionally high stress, Paul eventually outwits Mick, if only for a short time, by getting him to laugh his butt off, singing "Tie Me Kangaroo Down, Sport" together and then impressing his hunter in a trivia history game.

Under the conditions that not a single soul is safe or off-limits, "Wolf Creek 2" is brutally violent as it is uncompromising, yet never without a visceral blow. Cinematographer Toby Oliver palpably captures the dirt and heat of the gorgeous but unforgiving terrain, while McLean mostly keeps the tension as taut as the skin on your face. No thanks to an anticlimactic and rather dishonest ending, this sequel doesn't quite up the ante of its more genuinely terrifying precursor. No matter, though, because it's as foolproof as Mick making steak tartare with his trusty weapon. And it will surely upset the squeamish, the faint-hearted, and the pregnant; if it didn't, then it wouldn't be doing its job.