More City Crime: "Dame to Kill For" still dazzling but with less kick this time 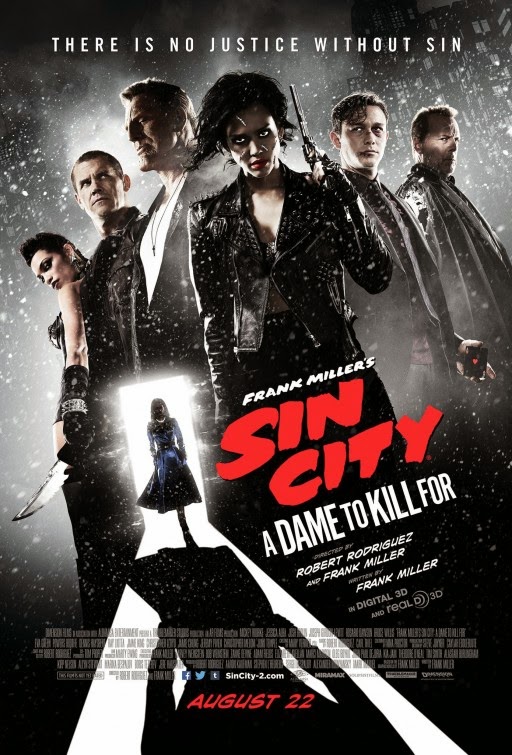 If any movie was able to make green screens look breathtaking, it was 2005's unparalleled "Sin City," a vividly violent, darkly intoxicating, insanely entertaining piece of pulpy cinema heaven that blazed a trail for graphic novels coming to life as the neo-film noir to end all neo-film noirs. It was a familiar, shadowy world but distinctly and audaciously visualized like no other. That was nine years ago, though, and now we're just getting the long-awaited follow-up, "Sin City: A Dame to Kill For." Directors Robert Rodriguez and Frank Miller, adapting from his Dark Horse graphic novels, return and sumptuously emulate Miller's artwork, but whereas that first adaptation felt like a cutting-edge motion picture, this companion piece is merely a hyper-stylized technical exercise with high style that won't quit but only the sporadic offering of pleasurable sin. Less alive than moribund, "Sin City: A Dame to Kill For" may be more of the same, but this time, the tenuously intertwined stories are disjointedly paced and not as interesting. This dame has less kick and just never coalesces into a cohesive, satisfying whole.

Like in "Sin City," a handful of vignettes are knitted together by being set in Basin City, a seedy, rotten metropolis of serial killers, whores and corrupt creeps. In "Just Another Saturday Night," world-weary, facially disfigured brute Marv (Mickey Rourke) wakes up on a highway to retrace his steps of how he got there and killed a group of frat boys. In "The Long Bad Night"—one of the two original pieces written exclusively for the film—cocky young gambler Johnny (Joseph Gordon-Levitt) rides into town, hitting the jackpot on slot machines and then taking on kingpin Senator Roarke (Powers Boothe) in a backroom poker game that brings him bad luck. The third story, a prelude to the first film, is the centerpiece as it involves "a dame to kill for" in the form of femme fatale Ava Lord (Eva Green). P.I. Dwight McCarthy (Josh Brolin) becomes the real victim when killing an innocent man, mistress Ava's rich husband, which was all part of her master plan. Now, Dwight is coming back with a vengeance and he's gaining an assist from Marv, Old Town's head dominatrix/prostitute Gail (Rosario Dawson), and samurai-sword-swiping assassin Miho (Jamie Chung). Finally, in "Nancy's Last Dance," Nancy Callahan (Jessica Alba), now adding heavy drinking to her dance routine at Kadie's Club Pecos after the death of knight John Hartigan (Bruce Willis, popping up in mirrors as a ghost), finishes off her downward spiral with her revenge on Senator Roarke.

Popping with smoke, blood and bare breasts, "Sin City: A Dame to Kill For" is over-the-top in its pulpy, nihilistic, hard-boiled vision and tone, and knows it. How could it not? When Ava slinks out of a pool after a nude swim, Dwight notes in voice-over that she always puts on a piece of theater, "or maybe it was retail." "You can't make a sale without showing the goods," he adds. The visual style is still stark and dazzlingly composed as black and white with splashes of color, and the whole filmmaking process is still impressive, as actors are blended into computer-generated backgrounds. On an aesthetic level, it will be hard to find a pretty frame that doesn't look like a stylish panel come to life. Unfortunately, at the same time, the novelty of such a cool, monochromatic world has worn off, so once we get past that, the artificiality stands out and more time is allowed to focus on the writing. The ugly truth is that there isn't a soul to care about, these sleazed-up characters mere archetypal vigilantes and sirens, and the anthological storytelling lumbers along instead of moving and making seamless transitions. So when the viewer feels blasé about the trajectory of each yarn, what's the point?

For his second go as Marv, Mickey Rourke (and his ugly mug) was born to play the gravelly-voiced animal-with-a-heart-of-gold with the most humanity. Joseph Gordon-Levitt fits the bill as the slick Johnny, but the most interest-grabbing aspect of that thread is really Powers Boothe's effectively repellent Roarke. Josh Brolin is an acceptably commanding replacement for Clive Owen as Dwight. (And, while we're on the topic of replacements, Jamie Chung and Dennis Haysbert are recast, respectively, as Miho and brick-shithouse bodyguard Manute, taking over for Devon Aoki and the late Michael Clarke Duncan.) An emerald-eyed, ruby-lipped Eva Green embraces the tone the filmmakers were going for and burns the screen as the voluptuous, man-eating Ava Lord, adding her delectable (and regularly nude) femme fatale to her growing catalogue of strong characters. Though protected with a no-nudity clause by playing a stripper who rarely strips, Jessica Alba gets to show a darker rawness (and some badass, self-inflicted scars) than she has ever before as Nancy, who drinks from a vodka bottle before, after, and during her time on stage—oh, and she gyrates a lot.

With all the A-list talent procured, it is fun to see a select few of additional cast members perform on a campy, deadly serious level, like Christopher Meloni and Jeremy Piven, as detective partners Mort and Bob, and Lady Gaga, who actually fits right in with the surroundings in one scene as a sympathetic waitress. At the mercy of the script and its figuratively black-and-white nature, though, others are unable to make a worthwhile mark, including Ray Liotta, as a philandering businessman; Juno Temple and Julia Garner both playing arm-candy hookers Sally and Marcie in separate stories; Christopher Lloyd, as Dr. Kroenig who treats Johnny's gnarly broken hand; and Stacey Keach, covered under loads of blobby make-up as mob boss Wallensquist.

Even with "Sin City: A Dame to Kill For" underperforming as an actual living, breathing film beyond very pretty cosmetics, this disheartening news does not mean there isn't some nasty, cold-hearted fun to be had around the fringes. But, in the long run, take away the style and what do we really have? Gratuitous female nudity, leaden blows to the head, and so many decapitations that you will lose track, yes, but that's why the first "Sin City" exists. Sure, it might have had more style than enduring substance, however, Robert Rodriguez and Frank Miller were still on to something groundbreaking and thrilling, akin to lightning in a bottle, that can't really be reheated. Besides, nine years is too long to wait and then be unsatisfied with slick-looking, occasionally boring emptiness.